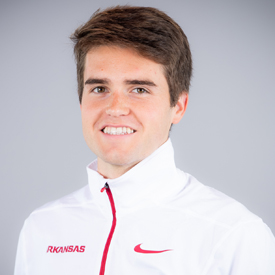 2015 Cross Country: Ran in the Main Line Invitational and finished 87th with a time of 21:42 on the four-mile course at Haverford College.

2014 Cross Country: Did not compete at any meets.

Catholic High School
Registered consecutive top-15 finishes at the Arkansas 7A Cross Country Championships … Came in 12th at the state meet as a junior and finished ninth as a senior … Runner-up in the 1600 meters at the Arkansas Outdoor Track & Field Meet of Champions … Earned all-state honors in both cross country and track … Was the 7A state champion in the 1600 meters as a senior … Member of Mu Alpha Theta (Mathematics Honor Society) and the Beta Club.

Emerald A.C.
Competed for Emerald A.C. in Ireland and was a member of the U18 Boys national championship 4×400 meter relay team … Placed third individually in the U18 Boys 1500 meters.