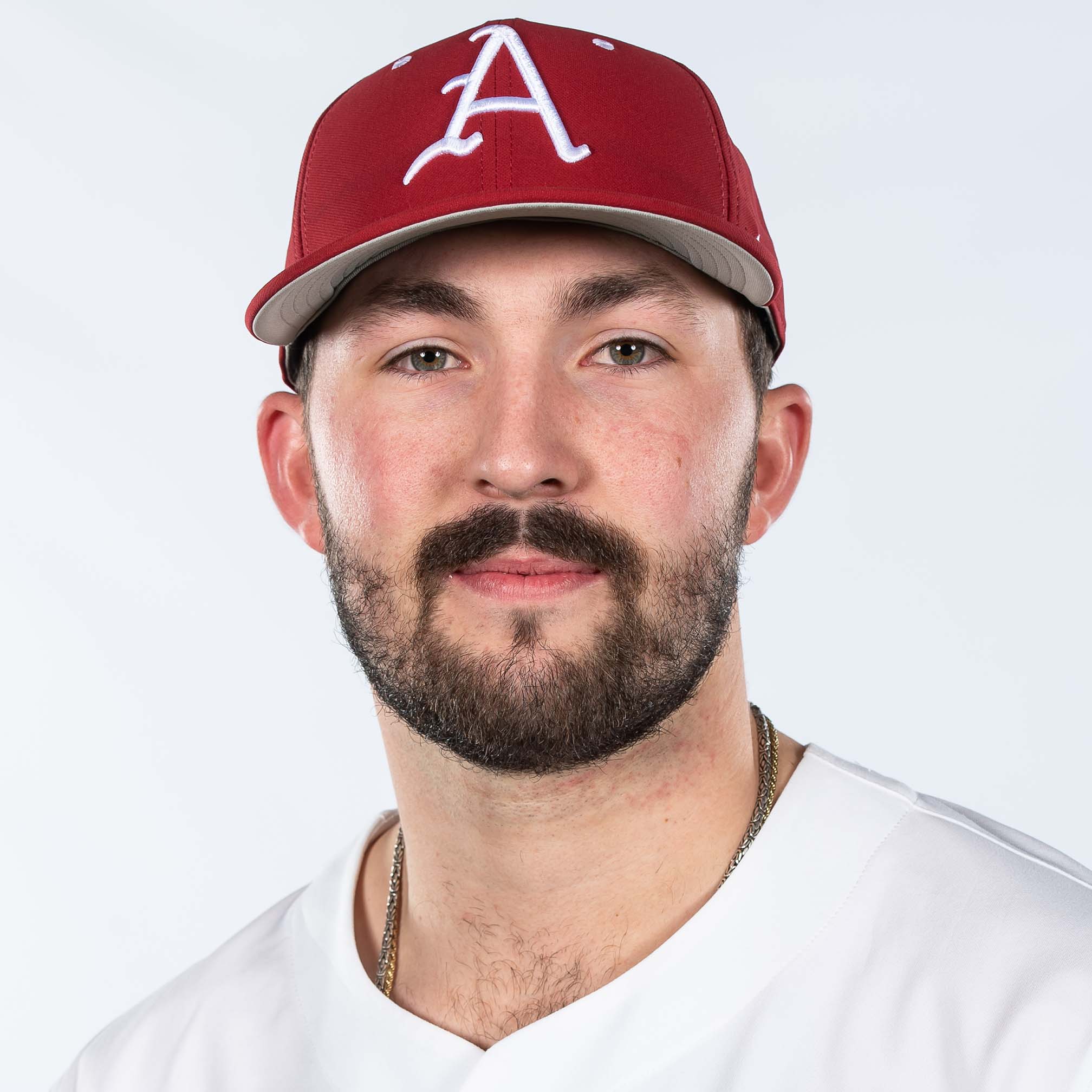 Blossomed in his final season as a Hog, emerging as the staff ace … Made 20 appearances on the mound with 19 starts … Posted an 8-6 record with a 3.65 ERA in 116.0 innings of work … Struck out 113 batters while walking only 34 … Averaged 8.7 strikeouts per game … Finished the season as the team leader in wins (8), strikeouts (113) and innings pitched (116.0) … Only Razorback pitcher to eclipse 100 strikeouts on the year … Only SEC pitcher to throw more than 100 innings … Ranked second among all SEC pitchers in strikeouts (113) … Turned in 11 quality starts … Pitched six or more innings in 12 of his starts … Hit double-digit strikeouts in two starts … Fanned five or more batters in 14 starts … Defensively, did not commit an error in 22 total chances (1.000 fielding percentage) … Picked off one runner and helped catch four potential base stealers … In SEC games, went 3-3 with a 3.84 ERA in 58.1 innings over 10 games (10 starts) … Struck out 59 and limited opposing hitters to a .244 batting average … Made his first start of the year in the season opener against Illinois State (Feb. 18), striking out five over five innings of two-run ball …  Notched his first quality start of the campaign vs. Indiana (Feb. 25) in the Karbach Round Rock Classic at Dell Diamond in Round Rock, Texas, punching out 10 while allowing just one run … Racked up season-high 11 strikeouts in game one of a doubleheader against UIC (March 10), registering his second quality start of the year in the outing … First SEC start came against Kentucky (March 18), working 6.1 innings of one-run ball and striking out seven … Punched out nine in a road start at Mizzou (March 25) … Held Mississippi State (April 1) to one run on four hits over seven innings while fanning six … Twirled seven scoreless innings at Florida (April 7), allowing only one and striking out seven … Collected a quality start against No. 15 LSU (April 14), striking out seven over six innings … Picked up his fourth consecutive quality start in an outing at Texas A&M (April 22), allowing two runs (both unearned) on two hits while fanning seven … Went a season-long eight innings against Ole Miss (April 29) … In the NCAA Tournament, made five appearances (four starts) and posted a 3-1 record with a 2.43 ERA in 29.2 innings of work … Earned a spot on the NCAA Stillwater Regional All-Tournament Team after a dominant outing vs. Grand Canyon (June 3) in which he tossed seven innings of one-run ball and struck out four … Made his lone relief appearance of the season at No. 6 Oklahoma State (June 5) … In the NCAA Chapel Hill Super Regional, earned a quality start at No. 11 UNC (June 11) with six strikeouts over 6.2 scoreless innings of work … In the College World Series, made two starts and compiled a 1-1 record with a 2.30 ERA over 15.2 innings … Threw 7.2 innings of two-run ball vs. No. 2 Stanford … Earned his 11th quality start of the season in his final start of the year, matching his season long of eight innings vs. Ole Miss (June 23) … Did not walk a batter and struck out seven while allowing just two runs … Earned a spot on the College World Series All-Tournament Team for his efforts … Named a finalist for the ABCA/Rawlings Gold Glove Award … Earned a spot on the midseason watch list for the USA Baseball Golden Spikes Award … Named to the watch list for the College Baseball Foundation Pitcher of the Year Award … Helped Arkansas set a new school record in fielding percentage with a .982 mark for the year … Member of a Razorback pitching staff that set a new school record with 674 strikeouts in 2022.

Made nine appearances on the year, going 1-0 with a 6.91 ERA in 14.1 innings of work exclusively out of the bullpen … Logged one save … Struck out 15 while allowing 13 runs (11 earned) on 15 hits and four walks … Pitched multiple innings on three occasions and racked up multiple strikeouts in four outings … Made his season debut against SEMO (Feb. 26), collecting five strikeouts in a season-long 4.2 innings … Fanned a pair in a scoreless inning of relief against Arkansas State (May 11) … Earned his first career save after punching out four in three hitless innings of work against No. 12 Ole Miss (May 29) at the SEC Tournament, helping the Razorbacks win their first SEC Tournament title … Two strikeouts in two scoreless frames against No. 19 Nebraska (June 6) in the NCAA Fayetteville Regional … Member of an Arkansas pitching staff that set a school record with 657 strikeouts in 2021.

Sophomore (2020)
Entered the season ranked 63rd among starting pitchers in D1 Baseball’s Preseason Position Power Rankings … Started three games on the mound for the Razorbacks in 2020 … Put together a 2-0 record, winning each of the first two games he started … Finished with a 2.00 ERA with 19 strikeouts over 18.0 innings on the mound … Allowed seven runs, four earned, on 13 hits and four walks, as opponents hit .203 against him … One of seven Hogs to strike out 10 or more batters in 2020 … Started Opening Day for the Hogs … Went 6.2 innings of two-hit, one run (unearned) ball with one walk and 11 strikeouts against Eastern Illinois (Feb. 14) … Career-high K’s vs. the Panthers … Last time an Arkansas pitcher struck out 11 batters was Isaiah Campbell vs. Missouri on March 15, 2019 … One of six Razorbacks to strike out 11 or more in a game since 2011 … Eighth career performance with 1 or fewer runs allowed … Picked up his second win of the season after tossing 6.0 innings against Gonzaga on Feb. 21 … Allowed three runs, two earned, on five hits & three walks, striking out three … Reached two wins in two games, taking 11 starts to do so in 2019 … Went 5.1 innings against No. 22 Oklahoma in Houston, allowing three runs, two earned, with five strikeouts … Did not receive a decision vs. OU … Eighth start with no walks allowed … Part of a pitching staff that finished with a 3.68 ERA and 143 strikeouts over 142.0 innings of work.

Made 20 appearances on the mound, 19 being starts … Named to Opening Week rotation, starting game two against Eastern Illinois (Feb. 16) … Built up a 4.02 ERA over 78.1 innings, the second most by a Razorback pitcher in 2019 … Had six outings of five or more innings (Louisiana Tech – March 9, Mississippi State – April 20, Tennessee – April 28, LSU – May 11, Ole Miss – May 24, Central Connecticut – May 31) … Went 3-5 with wins over Arkansas-Pine Bluff (April 16), Mississippi State (April 20) and Central Connecticut (May 31) in the NCAA Regional … His lone relief appearance came against Missouri State (March 26) where he threw one scoreless inning on 12 pitches … Struck out 55 batters during the season and walked only 14 for a 3.9 strikeout-to-walk ratio, the 14th-highest in the SEC … Never allowed more than two walks in an appearance … Walk total (14) tied for the 37th-lowest in the nation and tied for third-lowest in the SEC … Pitched a season-high 7.2  scoreless innings in his 11th start of the year, coming against No. 2 Mississippi State (April 20), striking out five with no walks and only four hits allowed … Followed it up with a second-straight 7+ inning outing, going 7.0 against No. 18 Tennessee (April 28) and striking out a season-high 10 batters with only two hits allowed and one walk … Started the opening game of the NCAA Fayetteville Regional vs. Central Connecticut (May 31), going 5.1 innings with two hits allowed, one earned run, one walk and two strikeouts on 58 pitches … Combined during the NCAA Tournament, made three starts, throwing 10.1 innings and allowing only one walk.

High School
Played for head coach Trey Holloway at Greenwood HS … Four-star athlete in football, according to ESPN and the No. 6 overall ranked player in the state of Arkansas by Perfect Game … A 2018 Preseason All-American by Perfect Game and top-500 ranking among all players in the nation … Compiled a 0.45 ERA over his final two years of high school, including a 0.42 ERA as a senior … Was a perfect 10-0 on the mound in 2018, allowing just four earned runs in 66.2 innings … Also struck out 123 batters and walked only 14 … Notched seven games throughout the year with at least 10 strikeouts … Did not allow a run in his final eight starts, including a 4-0 win over Benton in the Class 6A state championship game … Struck out 12 in the championship game in 2018 … 2018 Arkansas Democrat-Gazette All-Arkansas Preps baseball player of the year … Also was a force offensively, hitting .424 with four home runs and 37 RBI.