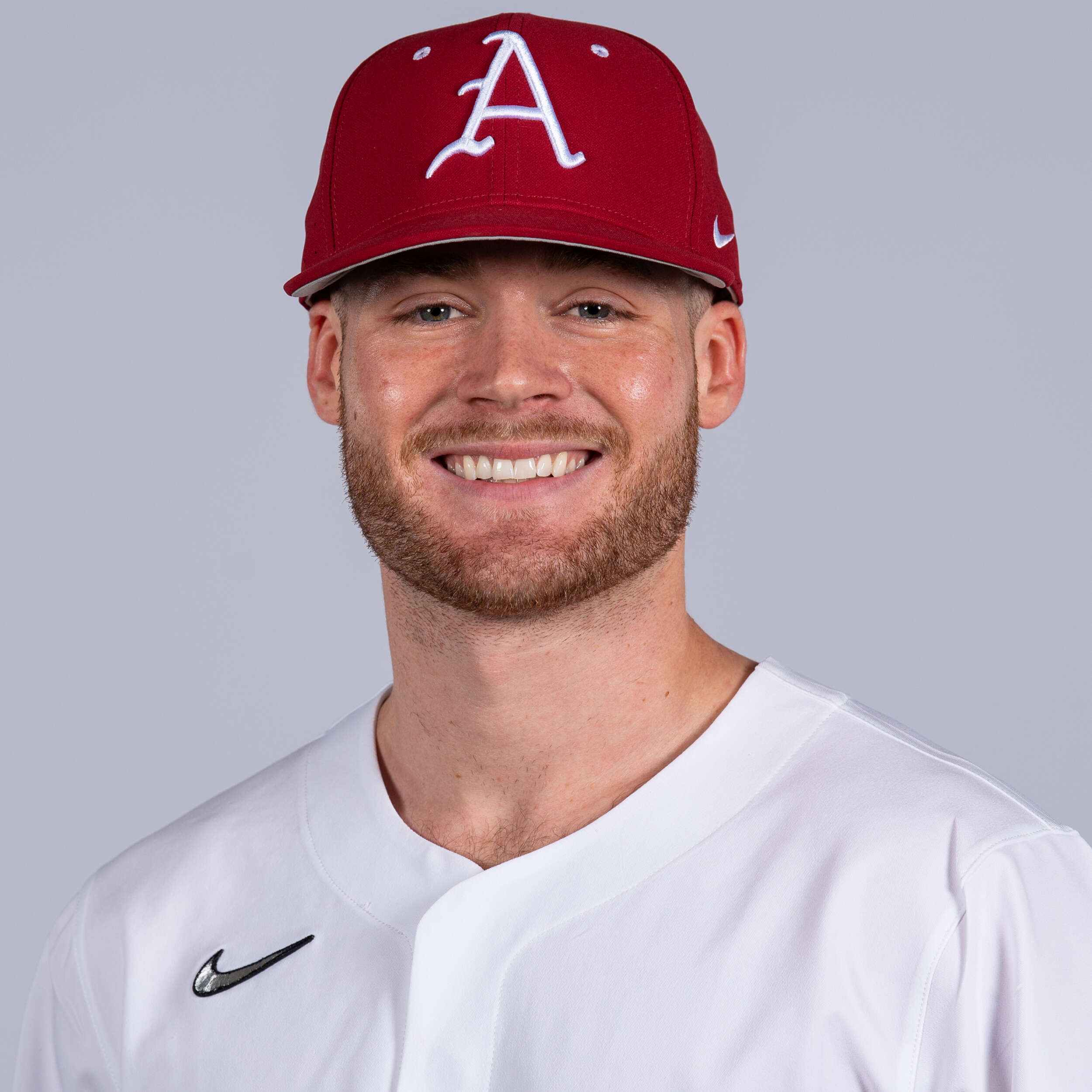 Redshirt Senior (2021)
Played in 51 games with 49 starts (39 at third base, nine at first base, one at second base), slashing .263/.395/.519 with 11 home runs and 35 runs batted in … Scored 39 runs … Tallied 41 hits, including seven doubles, on the year … Posted a team-best 1.0 walk-to-strikeout ratio with 34 walks and 34 strikeouts … Also plunked by four pitches … Totaled 81 bases … Had the second-most sacrifice flies (6) on the Razorbacks … Recorded 10 multi-hit games and nine multi-RBI games, tying INF/OF Cayden Wallace with a team-best three three-RBI efforts … Posted a season-long seven game hitting streak and a season-long reached base streak of 10 consecutive games … Stole two bases in five attempts … Recorded a .945 fielding percentage with eight errors in 145 chances … Made his first start as a Razorback in the season opener against No. 3 Texas Tech (Feb. 20) in the State Farm College Baseball Showdown at Globe Life Field in Arlington, Texas, collecting an RBI, two runs scored and two walks … Hit his first home run of the season against Murray State (March 6), driving in three runs in the contest … Recorded two hits, including a home run, with three runs batted in, three runs scored and three walks on the road at No. 3 Ole Miss (April 11) … Had two home runs against UAPB (April 14), driving in three runs and scoring a season-high four runs … Posted a .357/.471/1.071 slash line with three homers, seven RBI and five runs scored at the SEC Tournament (May 26-30) to help Arkansas win its first SEC Tournament title … Delivered a season-high four RBI on two hits, including a home run, against No. 16 NC State (June 11) in game one of the NCAA Fayetteville Super Regional … Part of a Razorback offense that hit a school-record 109 home runs in 2021 … Helped Arkansas set a school record in fielding percentage with a .980 mark for the year.

Senior (2020)
Redshirt season … Sat out due to transfer rules.

Junior at East Tennessee State (2019)
Smith started all 55 games for the Blue and Gold with and was second on the squad with a .304 batting average … Selected to the All-SoCon second team for the second straight year … Totaled seven homers on the season, 30 RBI, 14 doubles and 42 walks … Logged four three-hit games, including two in SoCon play … Second on the team with a .427 OBP and second in the league with 42 walks throughout the season … Finished 2019 with seven steals in 11 attempts.

Sophomore at East Tennessee State (2018)
Moved defensively to second base from the hot corner, starting 46 games with 47 appearances … Selected to the All-Southern Conference second team … Batted .295 for the season with 12 doubles, a triple, two homers, 22 RBI and 32 runs … Went on a 13-game hit streak near the end of the season, working his way into the cleanup spot for seven games during the stretch … Also hit safely in 20 of 21 games midway through the season with a 27-game reached base streak, the second longest of any ETSU player in 2018 … Tied for the team lead in stolen bases, swiping eight bags in 10 attempts.

Freshman at East Tennessee State (2017)
Named to the Southern Conference All-Freshman team after starting all 59 games for the Bucs … Batted .301 in 219 at-bats while racking up 66 hits and 38 RBI … Batted from the six-hole in 46 of his 59 games, starting at the hot corner in every game … Was one of three ETSU players to start every game at one position (Cook at SS, Maher in RF) … Started his first career game with a bang, earning two hits and two runs while driving in a team-high three RBI to lead ETSU to an opening day 18-6 win over Central Michigan.

Wilson Central High School
Attended Wilson Central HS … One of the top players in the Nashville area … Named to the Tennessee Baseball Coaches Association All-Star team as a shortstop.

Personal
Father, Shawn, played at Southern Mississippi University and was a scout for a number of MLB organizations later in his career.