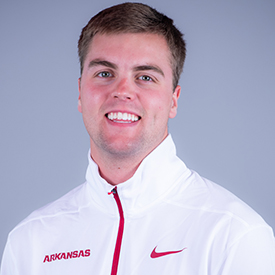 Junior (2017)
Opened his second season as a combined events performer for Arkansas placing fourth at the Razorback Invitational off a PR of 5,588 in the heptathlon … Scored three points towards Arkansas’ SEC Indoor Championships victory, placing sixth in the heptathlon through PR performances in the high jump 1.94m/6-4.25 and shot put 12.92m/42-4.75 … Opened the outdoor season placing second in the decathlon at the Arkansas Spring Invitational with a score of 7, 437 … PR’d in the discus throw with a mark of 41.00m/134-6 at the John McDonnell Invitational … Placed fourth in the decathlon at the SEC Outdoor Championships off a PR performance of 7,635 led by a major personal best in the pole vault of 4.70m/15-5 … Qualified for the NCAA Outdoor Championships in the decathlon … Capped the collegiate season earning NCAA honorable mention honors with an 18th-place finish at the national meet … Placed 11th at the USATF Outdoor Championships with a score of 7,255.

Sophomore (2016)
Placed seventh in the heptathlon in his combined events debut for Arkansas at the Razorback Invitational (1/30) with a score of 5,282 points … Improved to a new personal best of 5,336 points at the SEC Indoor Championship (2/27), placing seventh overall to help the Razorbacks to an indoor conference title … Opened the outdoor season with a third-place finish in the decathlon at the Arkansas Spring Invitational (3/26), scoring 7,281 points … Set personal bests of 10.91 in the 100 and 4:27.44 in the 1,500 at the SEC Outdoor Championship (5/14) which propelled him to a new decathlon PR of 7,356 points, earning entry into the NCAA Outdoor Championship … Capped his first year as a Razorback, placing 18th at the outdoor national meet, good for NCAA Honorable Mention recognition.

High School
Lettered in track and field at Cedar Rapids Kennedy High School … A four-time state meet and Drake Relays qualifier … Holds the school record in the long jump, 4-x-100 meter relay, 4-x-200 meter relay and the shuttle hurdle relay … Was a part of the shuttle hurdle relay team that ran the third-fastest time in state history … Also lettered in baseball where he was a two-time All-Conference, All-Metro, All-District and All-State selection … Was the team MVP for football … Also lettered in football.

Personal
Born on July 23, 1995 … Son of Eric and Shelley … Has three siblings; Devon, Dalles, Kamae … Majoring in sports management … Was a four-year math, science and social studies scholar at Cedar Rapids Kennedy along with an Academic Honors medalist.