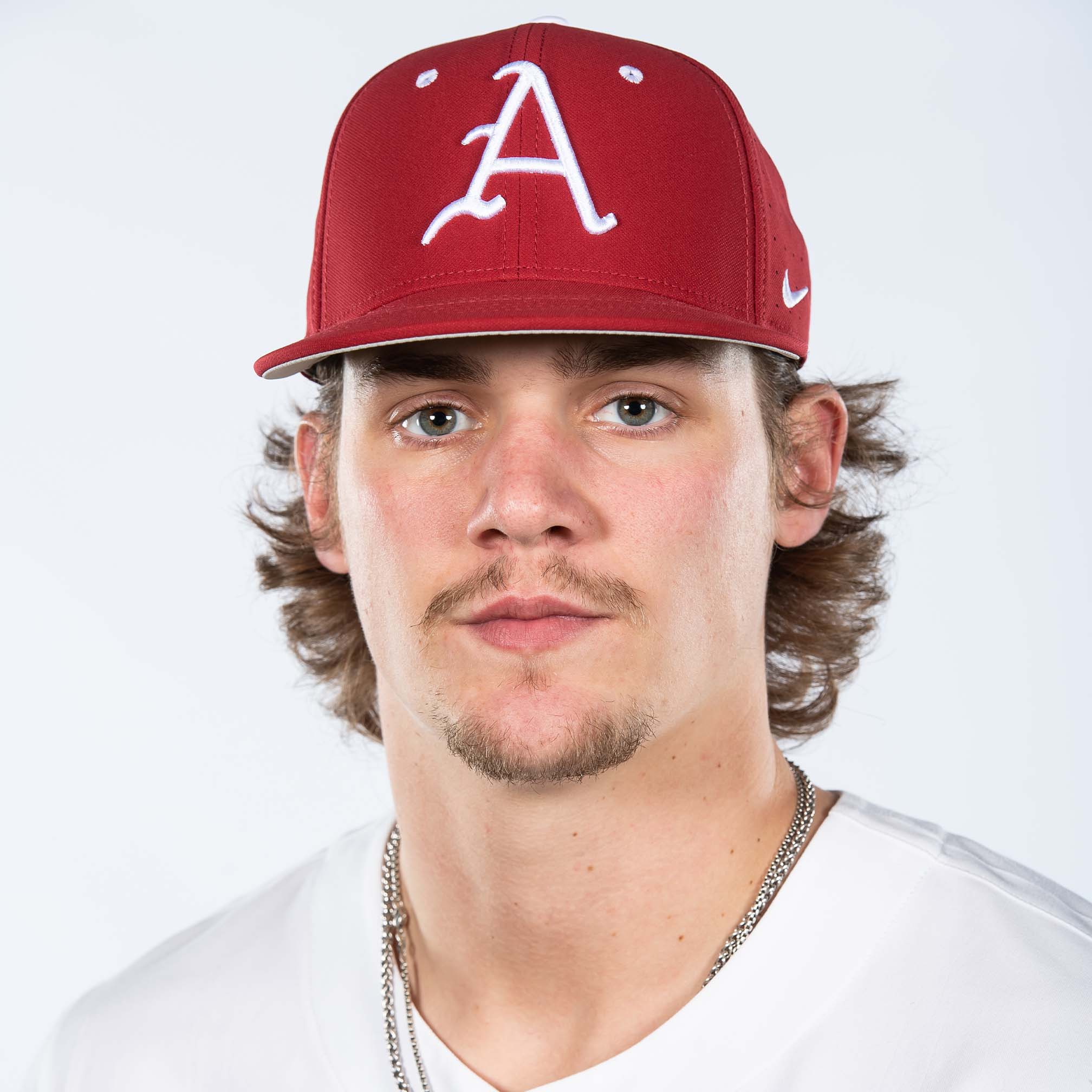 Senior (2022)
Made 14 appearances in relief … Went 0-1 with a 3.77 ERA in 14.1 innings of work … Recorded 17 strikeouts … Allowed seven runs (six earned) on six hits and 12 walks … Limited opposing hitters to a .125 batting average … Made his season debut vs. No. 6 Stanford (Feb. 27) in the Karbach Round Rock Classic at Dell Diamond in Round Rock, Texas, punching out one in 1.1 innings out of the bullpen … Punched out a pair of batters in a scoreless frame against Grambling (March 15) … Recorded a season-high three strikeouts in game one of a doubleheader against UAPB (April 12) … In the College World Series, pitched a season-long 2.1 innings vs. Ole Miss (June 20) and struck out three in a scoreless relief outing … Member of a Razorback pitching staff that set a new school record with 674 strikeouts in 2022.

Junior (2021)
Made 10 appearances out of the bullpen … Logged a 1-0 record with a 3.14 ERA in 14.1 innings pitched … Struck out 15 on the year, allowing seven runs (five earned) on 12 hits and eight walks … Picked off a runner, the only Razorback pitcher to do so during the season … Season debut came against No. 3 Texas Tech (Feb. 20) in the State Farm College Baseball Showdown at Globe Life Field in Arlington, Texas, striking out four batters over a season-long three innings of two-hit, one-run ball … Fanned a pair in two hitless innings against Oklahoma (March 16) … Punched out two in a perfect frame against Memphis (March 23) … Member of an Arkansas pitching staff that set a school record with 657 strikeouts in 2021.

Sophomore (2020)
Made seven appearances in relief for the Razorbacks in 2020 … Put together a 1.93 ERA over 9.1 innings of work, allowing just two runs on seven hits … Recorded 10 strikeouts and walked three, with just one extra-base hit given up … Retired the first batter he faced four times … Posted five scoreless outings … Was the final reliever used in the Sunday finale against Eastern Illinois (Feb. 16) … Tossed a clean ninth inning against the Panthers … Did not allow a hit, walk or run … Ninth scoreless outing of his career … Pitched a perfect eighth inning against Gonzaga on Feb. 20 … Back-to-back showings with all three outs put in play … Pitched again against the Zags on Feb. 22, throwing the ninth inning to finish out the 5-0 victory … Struck out one and allowed one of the two hits in the contest … Worked 1.2 innings against Baylor on March 1, giving up one run on two hits, walking one and striking out two … Allowed a homer in the sixth inning … Tossed one inning against Illinois State on March 3, giving up one run on one hit, striking out the other two batters he faced … Pitched the middle three innings against South Alabama on March 8, keeping the Jags off the scoreboard after three runs in the opening three frames … Allowed only one walk and two walks, striking out four … Career-high four strikeouts … Second time to work 3.0 innings … Entered in relief in the seventh inning against Grand Canyon on March 11 … Allowed two hits and struck out one over the final two outs of the frame … All three of his inherited runners scored in the frame … Ended the season with 13 career scoreless outings … Part of a pitching staff that finished with a 3.68 ERA and 143 strikeouts over 142.0 innings of work.

Freshman (2019)
Made 15 appearances, all in relief and most among all Razorback freshmen … Compiled a 7.58 ERA and a 1-1 record, his lone win coming against Tennessee (April 28) … Threw 19.0 innings and allowed 16 earned runs with 19 strikeouts and 17 walks … Held opponents to a .250 batting average and didn’t give up an extra-base hit … Five of his appearances came in conference play, where he compiled a 4.05 ERA in 6.2 innings … Made his first collegiate appearance against Louisiana Tech (March 10), throwing one scoreless inning and striking out the side … Appeared in two more games before making his SEC debut on the road at Alabama (March 22) … Had another scoreless outing against the Tide, giving up no hits on 12 pitches … Pitched a season-high 3.0 innings at No. No. 7 Vanderbilt (April 13), allowing just one hit and striking out one … Made one appearance in the postseason, pitching 2.0 innings in the NCAA Super Regional against Ole Miss (June 9) and giving up two runs and striking out three.

High School
Played for head coach Skylar Stagner at White Oak High School … Went 11-1 as a senior with a 0.68 ERA and two saves … Also notched 130 strikeouts with only 30 walks in 91.2 innings … Threw three no-hitters during the playoffs before falling in the regional finals … Also batted .367 with eight home runs, seven doubles, six triples, 36 RBIs and 30 runs scored … Was also 12-for-13 in stolen bases … Was named the All-East Texas Baseball Player of the Year … Missed most of junior season due to injury … Went 7-1 on the mound as a sophomore with a 1.28 ERA and 44 strikeouts in 43.1 innings … Hit .307 with a pair of home runs and 10 doubles in 2016 … Also played football for White Oak High School and recorded nearly 200 tackles over the past two seasons … Plays for head coach Skylar Stagner at White Oak High School.