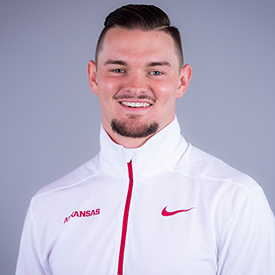 Junior (2018)
Competed in seven meets during the indoor season… Set a personal-best in the 60-meter hurdles with a time of 8.08 at the Arkansas Qualifier (Feb. 16)… Recorded a second-place finish at the SEC Indoor Championships with a score of 5,650-points in the heptathlon… Earned First-Team All-American honors in the heptathlon with a sixth-place finish at the NCAA Championships in College Station, Texas… Competed in eight meets during the outdoor season… Set a personal-best in the 110-meter hurdles running 14.82 at the Stanford Invitational (Mar. 30)… Finished the SEC Outdoor Championships with a personal-best total in the decathlon scoring 7,901-points…  Earned Second-Team All-American honors in the decathlon finishing with a total of 7,670-points…

Redshirt Sophomore (2017)
NCAA Outdoor Second Team All-American (decathlon), NCAA Indoor Second Team All-American (heptathlon) … Made his combined events debut for the Hogs placing fifth in the heptathlon at the Razorback Invitational with a score of 5,512 points off a PR performance of 8.41 in the 60-meter hurdles … Scored a personal best 5,688 points en route to placing fourth in the heptathlon at the SEC Indoor Championships, secured with PRs in the 60 (7.02) and the long jump (7.30m/23-11.50) … Completed the indoor season as a top-12 finisher in the heptathlon at the NCAA Indoor Championships … Started the outdoor season strong with a PR in the decathlon of 7,564 points off PRs in the 400 (49.07), high jump (2.00m/6-6.75) and pole vault (4.65m/15-3) at the John McDonnell Invitational … Scored four points for Arkansas at the SEC Outdoor Championships, placing fifth in the decathlon with a total of 7,546 points through PRs in the discus (43.83m/143-9) and javelin (57.55m/188-10) … Finished his collegiate season as one of the top-13 best-combined events performers at the NCAA Outdoor Championships … Wrapped up the year placing seventh in the decathlon at the USATF Outdoor Championships with a PR of 7,699 points … His performance at the USATF meet earned him a spot on the national team and a trip to Germany for the Thorpe Cup.

Personal
Son of Christine Moore… Has one sister; Anna, a nephew; Cooper, a niece, Emma Rose, and a brother-in-law, Travis Underwood.