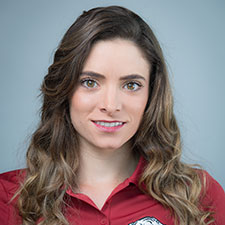 As a junior, Lopez played to a third-place showing at the Mexican Amateur in January … She shot 72-72-76-71=291 for the event … As a sophomore-to-be Gabriela Lopez took part in several amateur events during the summer months…Lopez tied for second at a U.S. Women’s Amateur qualifier and reached the first round of match play at the amateur…She finished third at the Canadian Amateur shooting 69-75-71-68=283 in Beloeil, Qubec, and took part in the Northwest Arkansas LPGA Championship on a sponsor’s exemption shooting 79-74=153…Lopez had a busy summer of amateur golf before joining the Razorbacks in the fall of 2012.  Lopez joined future Razorback teammate Emily Tubert at The Spirit International in November of 2011 in an international event in Texas…She then joined former Razorback Stacy Lewis at the 2012 U.S. Women’s Open in Kohler, Wis….Although she did not make the cut, the experience propelled her on to the 110th North & South Amateur Championship…Lopez posted a 221 playing 15th overall in stroke play before being eliminated in match play.

AS A SENIOR (2015)
Gabriela Lopez earned her LPGA Tour card and turned professional Dec. 6, 2015,  after finishing tied for 10th in the final stage of Qualifying School in Daytona Beach, Florida.  Lopez will forgo her final semester of play at Arkansas and begin preparation and play on Tour this spring. She is the second Razorback women’s golfer to earn her Tour card under Arkansas head coach Shauna Estes-Taylor joining Stacy Lewis who won stage three in 2008.  Lopez shot 68-72-70-70-73=353. The top-20 finishers all earned Tour cards with players who finished 21-45 earning conditional status from the 157-player field.

“Right now I have a million emotions in my mind and in my heart,” Lopez said. “This round was a tough one. I didn’t expect it to be that hard but I proved to myself that I was prepared for that moment.”

“Arkansas has been a huge part of my career,” Lopez explained. “I improved so much on the golf course and matured so much on and off the golf course. I’m so blessed to be part of such a great program. I’m just really grateful because they helped me get to this point. Without them I don’t know if I would be here.”

In three-and-a-half seasons with Arkansas, Lopez posted a 90% winning percentage and a 72.42 stroke average. She had three tournament wins and 19 top-10 finishes in 36 career events. Lopez finished as the NCAA individual runner up as a junior in Florida last season and has made two U.S. Women’s Open appearances while playing at Arkansas.

Led the team with a 70.92 stroke average in four fall events … Had one top five finish in the fall … Had eight rounds at par or better in the fall … Shot nine-under 207 with rounds of 68-71-68 at the Alamo Invite pacing Arkansas to a runner-up finish … Finished third overall at the Alamo….Spring saw Lopez tie for second at both the NCAA Regional in St. George, Utah, and the NCAA Championship in Bradenton, Fla…Lopez was a first-team All-SEC and All-America selection…Led the team with a 71.75 stroke average…Finished season with four consecutive top 10 places.

Success continued for Gabriela Lopez in her second season of college golf…Opened with a 215 to tie for 17th at the NCAA Preview shooting 72-73-70 against one of the toughest fields of the fall…Went two-under with 72-68 in the rain-shortened Mercedes Benz to tie for second and was one-under with a 215 at the Ruth’s Chris Tar Heel Invitational to tie for eighth…Remained under par with a three-under 213 with rounds of 73-68-72 to tie for seventh overall at the Alamo Invitational as she played the four fall events one-under…Success continued in the spring with Lopez picked up a third-place finish in Puerto Rico and winning the stroke play title at the Liz Murphey Collegiate…Rallied winning a one-hole playoff at LSU for the individual title helping Arkansas to the team title…Lopez went into the SEC Championship playing well and finished tied for second overall at the league event with a one-over 217 at Greystone…She capped the season at the NCAA Central Regional carding a 71 in the second round finishing with five birdies in the final six holes…Lopez was selected to the SEC First-Team, her second All-SEC honor, and finished the year with a team-best 72.85 stroke average…Has a 72.87 career average.

Lopez competed in all 11 team events on one as an individual with a 73.77 stroke average ranking second on the team…Lopez opened her Razorback career shooting a 210 with rounds of 72-70-68, tying the eighth-best three round total in program history…She improved on that with a 208 shooting 72-70-66 at the Westbrook Invitational…Her 208 ranks tied for the fourth-best round and her 66 in the final round ties the school record for best single round…Lopez finished the year with four top 10 finishes and picked up her first collegiate win at the Westbrook Invitational in February…Lopez was selected to the Southeastern Conference All-Freshman Team and was an All-SEC Second-Team selection as a freshman…Lopez was named an honorable mention All-American by Golfweek, earned SEC Freshman of the Week honors and is a National Golf Coaches Association All-Scholar selection…Lopez was a member of the Razorback Athletic Department’s Athletic Director’s List with a GPA from 3.50-3.99 for the fall 2012 and spring 2013 semesters.

Gabriela Lopez checks in from Mexico City, Mexico, where she attended Colegio Sagrado Corazon…Lopez took up golf when she was four years old and played in the 2011 U.S. Women’s Amateur…She competed in The Spirit International against future Razorback teammate Emily Tubert and is currently ranked 14th by the Golfweek prep rankings…Lopez was asked about her decision to attend Arkansas in an interview at the U.S. Women’s Amateur.

Maria Gabriela Lopez Butron was born Nov. 9, 1993, and is the daughter of Jose and Gabriela and has younger twin brothers, Jose Luis and Fernando.