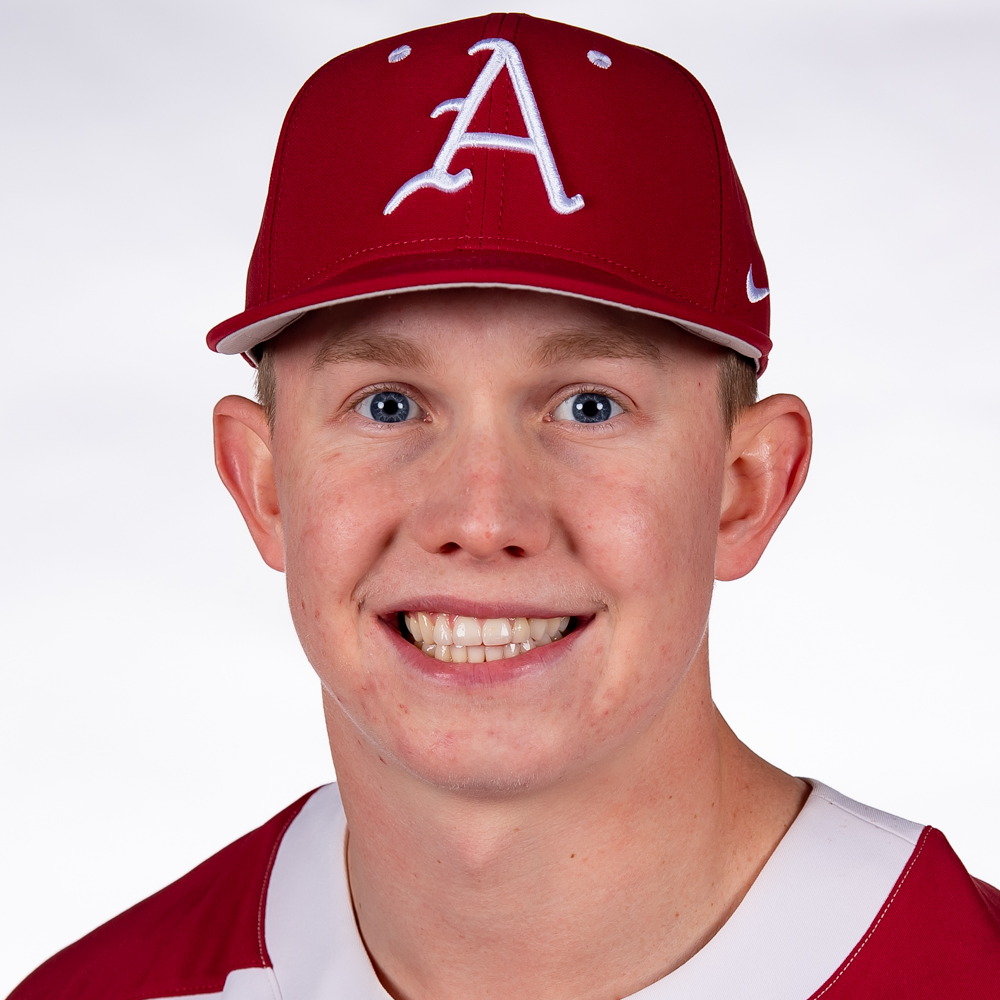 Began the year as a unanimous First Team Preseason All-American, gaining recognition from five outlets … Rated as the top outfielder in the country in D1 Baseball’s Preseason Position Power Rankings … USA Baseball Golden Spikes Award Preseason Watch List … Preseason All-SEC First Team Outfielder (Coaches) … Recognized by D1 Baseball as the best hitter in the conference after the season … Started all 16 games of the 2020 season at right field … SEC Co-Player of the Week (Feb. 18) and Collegiate Baseball National Player of the Week (Feb. 18) … Placed in the two- and three-hole spots in the batting order, seeing nine starts as the second hitter in the lineup … Finished the season in seventh in career home runs at Arkansas with 37 … Led the team in seven offensive categories – batting average (.448), slugging percentage (.791), on-base percentage (.513), hits (30), homers (six), RBIs (20) and total bases (53) … SEC leader in hits (30), total bases (53), slugging percentage (.791), finishing second in batting average (.448) … Eleven of his 30 hits went for extra bases, with five doubles and six home runs … Scored 19 runs and earned 10 free passes via seven walks and three HBPs … Recorded a hit in every game of the 2020 season, with a 17-game hitting streak dating back to the final game of the 2019 campaign … Earned his player of the week nods for his performance in the opening weekend against Eastern Illinois (Feb. 14-16) … Racked up seven hits in the series, five for extra bases, which included a pair of two homer games in the opener and finale against the Panthers … Kicked off the year with a three-hit, three-RBI game, launching a pair of two-out homers in the fifth and seventh innings … Moved into a tie for 10th in career home runs at Arkansas with 33, joining Dominic Fletcher (2017-19), Ryan Fox (2001-03) and Kevin McReynolds (1979-81) … Had one hit, one RBI, two runs and two walks in the middle game of the series vs. EIU … Wrapped the weekend with another three-hit performance, with a double and two more home runs, driving in six runs and scored twice … Hit homers in the second and sixth innings, making it three of his four dingers coming with two outs in the inning … Those two home runs bumped him to 35 for his career, sharing seventh all-time at Arkansas with Rodney Nye (1998-99) and Greg D’Alexander (1987-90) … All seven hits against the Panthers brought in at least one run … First Razorback since at least 2002 to record four home runs in the first series of the year … Four homers in the opening weekend totaled 1,427 feet (342, 324, 383, 378) … Had one hit in every game against Gonzaga (Feb. 20-23) … Scored twice and walked once in the opener against the Bulldogs, making it four-straight games to open the season with two runs scored in a game … Posted an RBI double in the third and fourth games of the series vs. the Zags, scoring once with two walks in the finale on Feb. 23 … Was the team’s top hitter at the Shriners Hospitals for Children College Classic in Houston, racking up seven hits, including a double and a homer, with two RBIs and three runs scored … Finished the weekend with a .538/.846/.571 line at the plate, sporting multi-hit performances in all three games … Had two singles in the opener against Oklahoma on Feb. 28 … Followed it with a three-hit, two-RBI, two-run showing vs. Texas on Feb. 29 … Launched a solo home run to straightaway centerfield in the sixth inning against the Longhorns to kickstart an attempted comeback late … Put him in sole possession of seventh in career homers at Arkansas with 34 … Added two more hits against Baylor in the Shriners finale on March 1, with a double and a single, the latter coming in the eighth, scoring the first of two runs in the frame to make it a one-run game vs. the Bears … Named to the 2020 Shriners College Classic All-Tournament Team … Recorded an RBI single vs. Illinois State on March 3 as part of a two-hit day for his fourth consecutive multi-hit showing … Kept the hitting streak alive with an eighth-inning single against South Alabama in the series opener on March 6 … Followed it with a pair of two-hit games at the plate, tallying three RBIs in the middle game of the set and two in the final contest of the series … His two RBIs in the finale came on a walk-off two-run home run in the ninth inning against the Jags … First walk-off homer of his career and first by a Razorback since Joe Serrano vs. San Diego State on March 8, 2013, exactly seven years apart … Tallied his fourth three-hit game of the year in the first midweek opener against Grand Canyon on March 10, scoring in the fifth, while driving in a run in the sixth … Added two more hits and two runs scored in the final game of the season on March 11, finishing the year with multi-hit performances and at least one run scored in each of the last four games … Needed two more homers to tie for sixth in career home runs at Arkansas.

Finished with the third-highest batting average on the team (.327), playing 65 games … Also matched his hit total (87) from 2018 and totaled 13 doubles, one triple and a career-best 17 home runs … Notched 51 RBIs, becoming the first Razorback to have 50 or more RBIs in his first two seasons since Rodney Nye in 1998 and 1999 … His home run total tied for second-most in the SEC and good for 28th in the nation … His hit total was also good for 10th-best in the league and his team-best slugging percentage (.575) was the ninth-highest in the conference … Totaled 153 bases, good for second on the team, fifth in the SEC and 18th most in the nation … In conference play, hit .319 in 29 games, the second-highest average on the team with six home runs and 20 RBIs … Also slugged .509 and had a .402 on-base percentage against conference opponents … In the NCAA Tournament, he hit .313, the third-highest average on the team with a .688 slugging percentage, three home runs and seven RBIs … Had a home run in the NCAA Fayetteville Regional (vs. Central Connecticut – May 31), in the NCAA Fayetteville Super Regional (vs. Ole Miss – June 10) and in the College World Series (vs. Texas Tech – June 17) and now has five postseason home runs in his career … Finished the year with 24 multi-hit games and 13 multi-RBI games … Half of his multi-hit games consisted of three hits or more, including two four-hit games (vs. Western Illinois – March 12; at #7 Vanderbilt – April 14) … Had a 14-game hitting streak from March 31-April 24, matching a career-long and tying for the longest on the team … Hit .369 during that hit streak with 24 hits, 16 RBIs and five home runs … Also had seven multi-hit games during that streak, including two games with three hits or more (4 at Vanderbilt – April 14 & 3 vs. Northwestern St. – April 23) … Against Vanderbilt, he tied his career high with four hits with three of those hits being singles and drove in one RBI in the 14-12 come-from-behind victory … Tied his career high in hits earlier in the year against Western Illinois (March 13), going a perfect 4-for-4 with a triple and a home run falling a double short of the cycle, while also scoring a career-high three runs … Had one of the best bats in the month of April, hitting .364 with a team-best eight home runs and 25 RBIs … Had eight multi-hit games during the month and also had two 5-RBI games (vs. Oral Roberts -April 9; vs. #18 Tennessee – April 27) … Against ORU, he only had two hits, but both were home runs, including his second-career grand slam … Ten games later, he notched his fourth multi-home run game of his career against Tennessee (April 27), part of a three-hit game … Was nearly held hitless in the NCAA Super Regional against Ole Miss, going 0-for-4 in Game 1 and just 1-for-4 in Game 2, but went 3-for-4 in Game 3 with four RBIs with a career-high two doubles and one home run in the 14-1 victory.

Played in and started all 69 games in the outfield … Hit .332, good for second on the team with 87 hits, 30 for extra bases, 16 doubles, 14 home runs, 58 RBIs and 145 total bases … Won SEC Freshman of the Year honors, becoming only the third Razorback to win a major SEC award (Andrew Benintendi – 2015; Nick Schmidt – 2006) … His 87 hits tied with fellow freshman Casey Martin for the Arkansas freshman single-season record … His 65 runs scored and 14 home runs led the team and were good for fourth and ninth in the SEC, respectively … The 14 home runs set an Arkansas freshman single-season record, previously set by Zack Cox (13 in 2009) … His 145 total bases were the most by any freshman in the SEC and also set an Arkansas freshman single-season record, previously set by Danny Hamblin (122 in 2004) … Hit .322 in SEC play with five home runs and 21 RBIs … Also slugged .521 and had a .375 on-base percentage against league opponents … In the NCAA Tournament, he hit .311, the third-highest average on the team with a .659 slugging percentage, three home runs and 11 RBIs … In the College World Series, he hit .250 with six hits and four RBIs … Finished the year with 24 multi-hit games and 13 multi-RBI games … Tallied his first three-hit game on Opening Day vs. Bucknell (Feb. 16), part of a 3-for-4 day with three runs scored and one double … Hit his first collegiate home run against Arizona (Feb. 21) in San Diego, California, a solo shot that was the only run of the game … Combined in series at Charlotte (March 21) and Florida (March 23-25), went 9-for-16 (.563) at the plate with six extra-base hits, three home runs and a staggering 1.313 slugging percentage, while striking out just twice … Had a season-high four RBIs against Dayton (March 1), Missouri State (April 17) and Oral Roberts (June 1) in the NCAA Fayetteville Regional … In the game against Dayton, he was just 1-for-4, but his lone hit was his first career grand slam … In the NCAA Regional opener against Oral Roberts, he went 3-for-5 with two home runs, his second multi-home run game of the year … Finished the regional 5-for-10 (.500), leading all Razorbacks with five RBIs and three walks … Established Arkansas’ freshman single-season home run record (14) with a solo shot in game two of the NCAA Fayetteville Super Regional against South Carolina (June 10) … Strung together a 14-game hitting streak from March 14 against Texas to April 4 against ULM, the longest hitting streak on the team … Hit .439 during that streak with eight multi-hit games and three games with three hits or more … Throughout the month of March, he hit .360 with six home runs and 22 RBIs … Was one of five freshmen and the only freshman in the SEC to have a .330 batting average or higher and a .550 slugging percentage or higher.

Canyon Randall High School
Ranked No. 369 in the nation by Perfect Game and No. 26 in the state of Texas … Attended the Perfect Game South Underclass Showcase as a freshman … Named the District 3-5A Newcomer of the Year in 2015 … Part of Canyon Randall team that finished 2015 with a 33-6 record and a district championship … Was also a Third Team TSWA 5A All-State player as a sophomore … Completed a stellar junior campaign by batting .477 at the plate with 32 RBI … Named District 3-5A MVP and First Team 5A All-State player in 2016 … Member of Amarillo Globe-News 2016 Baseball Super Team … Attended the 2016 Perfect Game National Showcase … Played summer ball with D-Bat 17u Robertson and was part of the AABC Connie Mack World Series … Named to CMWS All-Tournament Team after batting .524 with five extra-base hits … Played for Cory Hamilton at Canyon Randall High School.