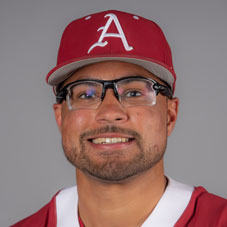 As a Redshirt Sophomore (2018)
Made 18 appearances with 17 starts, including eight in conference play, four in the NCAA Tournament and two in the College World Series … Recorded a 4.26 ERA and five victories, the third-most wins on the team … Allowed only 33 earned runs over 69.2 innings and struck out 75 batters, which were also the third-highest total on the team … Earned wins against Bucknell (Feb. 17), Kentucky (March 17), South Carolina (April 14), Texas A&M (May 13) and Florida (June 22) … Made his first appearance on Feb. 17 against Bucknell after being shut down for the 2017 season for bone spurs in his throwing elbow … Struck out a then-career-high seven batters over four innings on 78 pitches against Bucknell … Struck out a career-high eight batters in a career-long eight innings in the SEC-opening series against Kentucky … Made the start in the SEC Tournament semifinals against LSU (May 26) and struck out seven over five innings with just one hit allowed in the first five innings … Earned the victory that sent Arkansas to the CWS final with a 5.1-inning performance against Florida in the semifinals, giving up two hits and tying a career high with eight strikeouts on 86 pitches.

As a Sophomore (2017)
Made one appearance against Bryant (Feb. 25), throwing 0.2 innings, while walking one and striking out one on 26 pitches … Was shut down for the remainder of the year with an elbow injury, but was given a medical redshirt for the season.

As a Freshman (2016)
Made six starts in 13 appearances … Recorded 23 strikeouts in 31.2 innings of work, while going 3-1 with a 3.69 ERA … His 31.2 innings were the fifth-most on the team and he tied for second in wins … Recorded first career start, strikeout and win against Mississippi Valley State (Feb. 23), going 2.0 innings in a 21-4 victory … Earned wins against Grambling State (March 15) and No. 25 Creighton (April 19) … Made seven appearances in SEC play with one start … Was one of three freshmen to have at least one start in conference play … Compiled a 3.86 ERA against SEC teams, striking out 10 batters in 16.1 innings … Longest outing and first quality start was against Alabama (May 13), allowing one run in 5.0 innings pitched with two strikeouts … Had a career-high four strikeouts against Grambling State (March 15) … Turned in scoreless outings against Gonzaga (March 9), at Memphis (April 6), No. 25 Creighton (April 19) and Alabama (May 13) … Played for the Conejo Oaks in the California Collegiate Summer Baseball League where he was named to the South All-Star Team … Named to the 2015-16 First-Year SEC Academic Honor Roll.

Personal
Born on Aug. 15, 1997 … Son of Parry and Deanna Campbell … Has one sister, Taylor … Was born in Portugal … Biochemistry major.