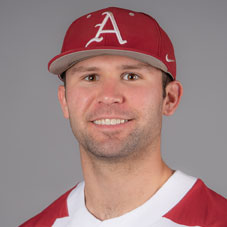 As a Sophomore (2018)
Made a career-high 43 appearances with 16 starts … Made 10 of his starts in conference play … Hit .222 with 13 hits, two doubles and 10 RBIs … Also walked 13 times and had a .389 on-base percentage … Only made three errors for a .957 fielding percentage …  Five of his 10 RBIs came against SEC opponents … Started nine of the final 10 games of the regular season at either shortstop or third base … Had a great season-opening series against Bucknell (Feb. 16-18), going 2-for-4 at the plate with a career-high two RBIs and two runs scored in game two … Matched his career-high two RBIs against Alabama (April 28) after going 2-for-3 with two singles and one run scored … Tied a career-high with two hits in the SEC Tournament quarterfinals against South Carolina (May 23) … Also had one RBI and two walks in that win over the Gamecocks … Appeared in three games in the College World Series, including two of the CWS Final, with all coming as a pinch runner.

As a Freshman (2017)
Made 34 appearances with six starts, five at third base and one at shortstop … Hit .133 with four hits, one double, two RBIs, and two walks … Made his first collegiate start at Missouri (March 25) … Went on to make four starts in the final 13 games, two in the NCAA Fayetteville Regional … Notched his first collegiate hit, an RBI double, in Arkansas’ SEC Tournament opener against Mississippi State (May 25) … Went a season-best 2-for-4 at the plate in the Hogs’ regional opener against Oral Roberts (June 2) with a run scored … Had one stolen base against LSU in the SEC Tournament championship game … Did not make an error in 28 chances.

Personal
Son of William and Carol Kenley … Has one sister, Grace, who plays soccer, basketball and lacrosse … Majoring in business.