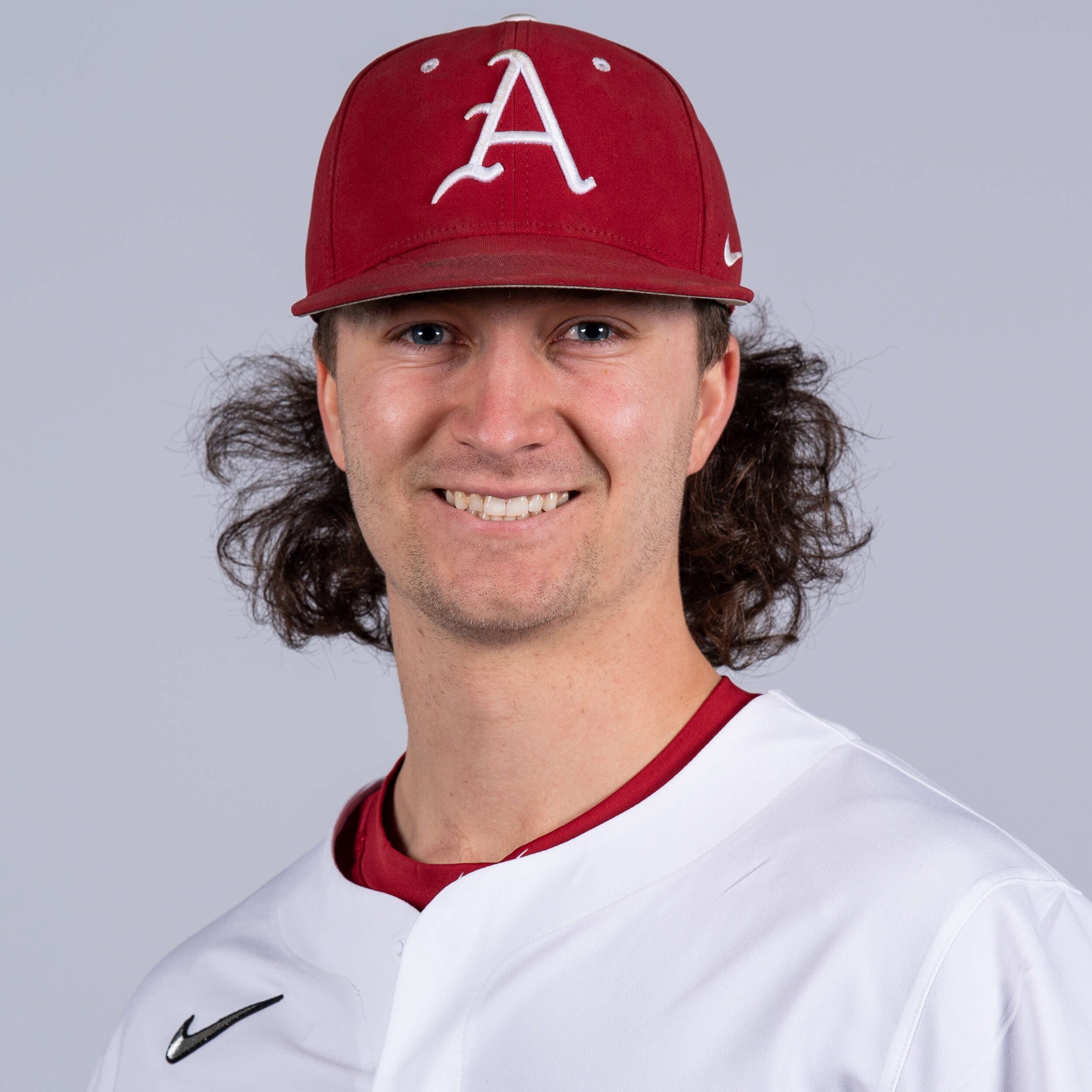 As a Sophomore (2020)
Made five appearances out of the bullpen for the Razorbacks in 2020 … Put together a 4.15 ERA over 4.1 innings of work … Allowed two runs on seven walks and one hit, striking out six … Inherited two runners over the course of the season and did not allow either to score … Retired the first batter he faced twice … Made first appearance of the year on Feb. 16, pitching the eighth inning against Eastern Illinois … Worked a scoreless frame, walking two and striking out two … First game with multiple strikeouts … Seventh outing with no runs allowed, fourth-straight dating back to 2019 season … Tossed a scoreless ninth inning against Gonzaga on Feb. 21 … Allowed one walk and struck out one Bulldog … Back-to-back shutout outings …. Eighth appearance with no runs allowed … Pitched in a season-high 2.0 innings against Texas on Feb. 29, allowing two walks with three strikeouts … Second time in his career with 2.0 IP, striking out the side in the seventh inning, then working around two runners on in the eighth … Career-high three strikeouts … Faced one Illinois State batter on March 3, walking him … Worked the end of the sixth inning and start of the seventh against Grand Canyon on March 11 … Charged with two runs on one hit and a walk after getting out of a jam in the sixth … First runs allowed in 2020 … Part of a pitching staff that finished with a 3.68 ERA and 143 strikeouts over 142.0 innings of work.

As a Freshman (2019)
Made 11 appearances, all in relief … Compiled a 4.82 ERA in 9.1 innings and gave up five earned runs with seven strikeouts and six walks … Held opponents to a .278 average … Made two of his appearances in conference play, throwing 2.0 scoreless innings with one hit allowed and one strikeout … Made his first collegiate appearance on Opening Weekend against Eastern Illinois (Feb. 16), giving up three earned runs in 2.0 innings … Went on to make 10 more appearances throughout the season and never gave up more than one earned run … Eight of his final 10 appearances were scoreless outings and never consisted of more than one inning of work … Made his SEC debut against Tennessee (April 27), where he pitched one scoreless inning and struck out one … Had at least one strikeout in seven of his 11 appearances … Threw a season-high 32 pitches in his first collegiate appearance against EIU.

New Diana High School
Ranked in the top 500 in the nation by Perfect Game … Named a Perfect Game Preseason Underclassmen All-American in 2016 and 2017 … The No. 63-ranked player in the state of Texas and No. 33-ranked right-handed pitcher … Was named a Perfect Game Preseason Second Team All-Region player … Also played in the 2016 Junior National Showcase and 2016 Perfect Game Underclass All-American Games after his sophomore season … Went 10-4 on the mound as a junior with 112 strikeouts and a 1.39 ERA … Also hit .382 with eight doubles, five triples, two home runs, 22 RBIs, 46 runs scored, and 21 stolen bases as a junior … Named back-to-back 16-3A Pitcher MVP as a sophomore and junior … Selected to the TSWA All-State Team … Played for Bernie Martinez at New Diana High School.