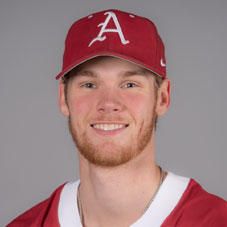 As a Sophomore (2018)
Made nine appearances with one save … Had a 6.43 ERA over 14.0 innings pitched with 10 earned runs allowed and 10 strikeouts … Three of his appearances came in league play as he threw 4.2 innings with three strikeouts … Did not give up an earned run in his first four appearances (5.1 innings), striking out six and allowing only five hits … Threw a career-high 3.2 innings at No. 2 Florida (March 24) … Picked up his first career save by finishing the final three innings against Texas (March 13), allowing only two runs and striking out one … Notched a career-high three strikeouts in a three-inning outing at San Diego (Feb. 25).

As a Freshman (2017)
Appeared in six games, earning one victory … Threw 5.1 innings with just four hits allowed and six strikeouts … Made his debut against Nebraska (March 4) at the Frisco College Classic, throwing 0.2 innings … Earned first collegiate victory came against Kansas State (April 25) at Kauffman Stadium … Threw the final inning against the Wildcats, striking out one, to secure the 6-5 win … Totaled two or more strikeouts in an outing twice (vs. Nebraska – March 4; vs. ULM – March 8) … His best outing came against ULM, holding the Warhawks hitless over two innings with two strikeouts on 21 pitches.

Francis Howell High School
Ranked as the No. 222 right-handed pitcher and a top 500 recruit according to Perfect Game … Ranked as the No. 2 right-handed pitcher and the No. 11 overall recruit in the state of Missouri … Named 2016 Rawlings-Perfect Game All-America honorable mention and Central second team All-Region … Named 2015 Perfect Game Underclassman High All-America honorable mention … Selected to the 2016 Class 5 MHSBCA All-State First-Team … 2016 All-Metro Pitcher of the Year … Posted a 10-1 record with a 0.56 earned run average and struck out 92 batters compared to 32 walks in 62.1 innings … Helped lead Francis Howell to a 29-11 record and a Missouri Class 5 state championship in 2016 and a 29-11 record and a Missouri Class 5 state runner-up finish in 2015 … Played summer and fall ball for the St. Louis Pirates Elite … Played for head coach Tony Perkins at Francis Howell High School.

Personal
Son of Greg and Kathy Kostyshock … Has one sister, Kaitlin … Chose Arkansas because it was not too far from home and is a great program all around … Majoring in business.