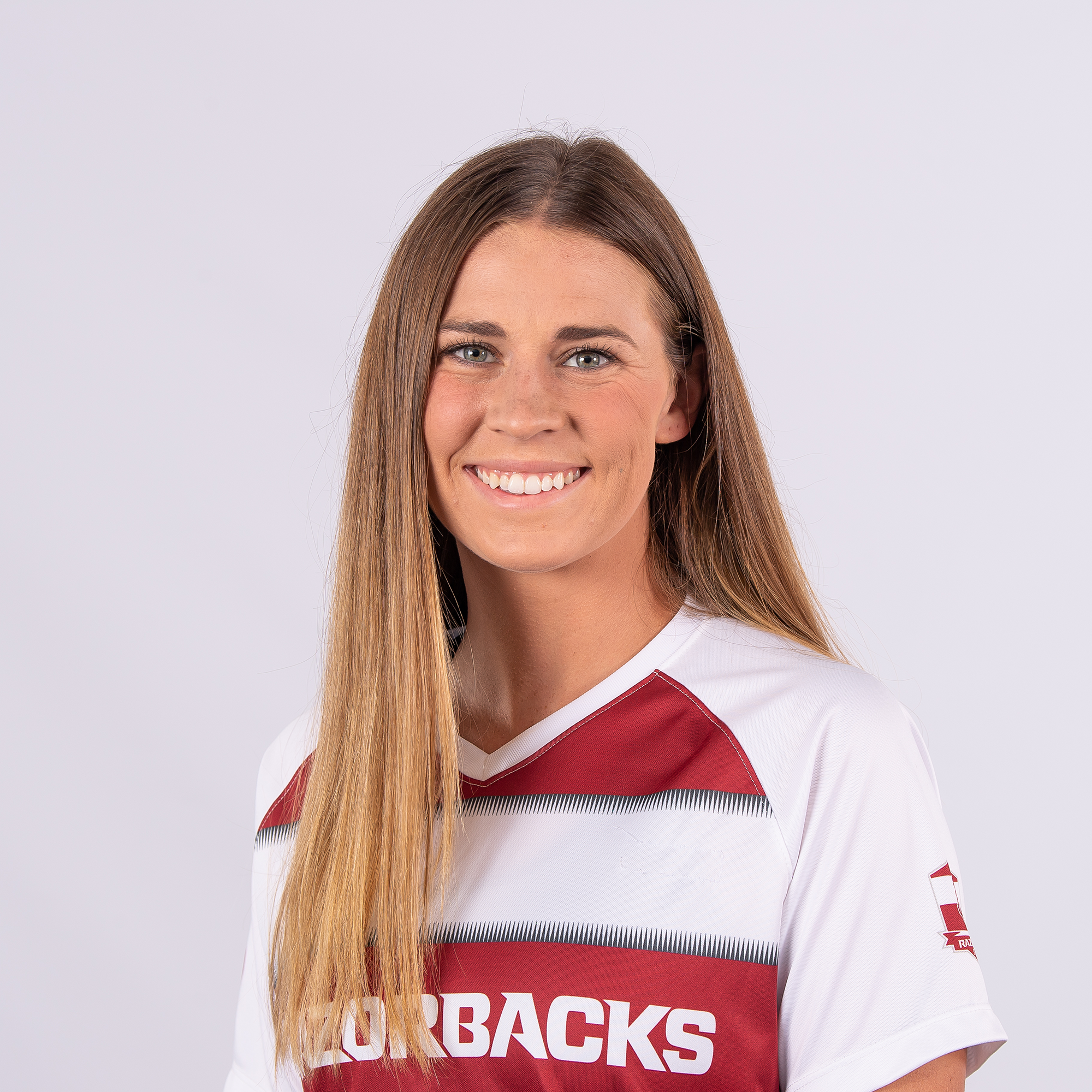 Played in all 24 matches, getting the start in 23… Became the program’s leader in all-time games played at 109, tied with Haley VanFossen… Has the second-most career starts at 104… Tallied 1,756 minutes, for a career total of 8,141… Averaged 73 minutes per game… Notched seven goals and assists this season, including two braces in SEC play… 20 of her 37 shots were on frame… Had the game-winner in the Hogs’ victories over Missouri and Auburn… Recorded 37 points, good for fourth-best on the team and tied for the program’s fifth-most career points at 92… Sent a season-high of four shots twice, at LSU and against Auburn in the SEC Tournament… Named to the SEC Fall Academic Honor Roll while getting her graduate degree in engineering management.

Got the starting nod in 15 games coming off an injury during her senior season… Was third on the team with six goals and 15 points, including two game-winners… All six goals during the season came against SEC opponents… Went 90 minutes in matches at Mississippi State (Nov. 6) and vs. South Carolina in the SEC Tournament semifinals (Nov. 19)… Put away a brace in Arkansas’ SEC Tournament quarterfinal victory over No. 15 Auburn (Nov. 17)… Recorded a point in four-straight matches to close out the Fall portion of the season… Had a season-high four SOG in a 2-1 victory at Ole Miss (Oct. 25)… Played 80+ minutes in eight of 15 matches during the season… Was named to the SEC All-Tournament Team for the third time in her career… Member of the 2020 SEC Fall Academic Honor Roll, earning her B.S. in Industrial Engineering… Arkansas’ nominee for the SEC H. Boyd McWhorter Scholar-Athlete award.

Did not compete due to injury.

Played in and started all 23 matches … Tied for the team-best with nine goals to go along with career highs in assists (7) and points (25) … The points were the most on the team and fifth-most in the conference … Also led the team with six game-winning goals, good for second in the SEC and ninth in the nation … Four of her nine goals came in SEC play, including at Georgia (Sept. 13), at Alabama (Sept. 23), at Ole Miss (Oct. 7) and vs. Kentucky (Oct. 11) … The goals against Ole Miss and Kentucky were in back-to-back matches … Also notched an assist in the 2-1 double-overtime victory over LSU, her only assists in conference play … Finished with 57 shots, good for second on the team, 25 coming on goal for a .439 shot-on-goal percentage … Notched at least one point in four-consecutive matches for the second-straight year between Aug. 31-Sept. 13 with goals against Baylor (Aug. 31), Florida Atlantic (Sept. 7), at Georgia (Sept. 13) and an assist against UConn (Sept. 9) … Totaled a career-high three assists in the 4-0 SEC Tournament victory over five-seed Ole Miss (Oct. 30) … Followed it up with the game-winning goal against eight-seed Florida in overtime to send Arkansas to its third-straight SEC Tournament final … Was named to the SEC All-Tournament Team … Totaled a career-high four points in the 5-1 victory over Little Rock in the first round of the NCAA Tournament, finishing with two assists and a goal … Named to SEC Fall Academic Honor Roll, majoring in Industrial Engineering.

As a Sophomore (2017)
Played in 23 matches, starting 22 in the midfield … Scored four goals with five assists for 13 points, fourth most on the team … The four goals tied for fourth on the team and made her one of six Razorbacks with at least one game-winning goal … Finished fourth on the team with 41 shots, 23 coming on goal to make up a .561 shot on goal percentage … The percentage was best on the team among players with 30 or more shot attempts … Had a season-high five shots against Mississippi Valley State (Sept. 3), at UConn (Sept. 7) and against Vanderbilt (Nov. 2) in the SEC Tournament semifinals … Her five assists were fourth most on the squad … Scored goals against North Texas (Aug. 20), MVSU and Vanderbilt in the SEC Tournament semifinals … Secured her third multi-goal game of her career by finding the net twice in the 11-0 win over MVSU … Scored in the 22nd minute against the Commodores to help send the Razorbacks to their second-straight SEC Tournament final … Recorded at least one point in five of the first seven matches, including a four-match point-scoring streak from Aug. 20-Sept. 3 … Scored eight points during that streak, six off goals scored … Had an assist in two of Arkansas four SEC Tournament matches (Ole Miss – Oct. 29; South Carolina – Oct. 31), both 1-0 victories … Played all 90 minutes of Arkansas’ NCAA Tournament First Round match at NC State, registering one shot … Named to SEC Fall Academic Honor Roll.

Appeared in 24 games and earned 22 starts … Collected nine goals, two assists, 20 points and three game-winners during her first season as a Razorback … Tied for ninth in the SEC for goals (9) … Finished third on the team in points, second in goals scored, seventh in assists, third in shots (49) and shots on goal (23) and fourth in game-winning goals (3) … McKeon recorded 49 shots with 23 on goal for a .469 shot on goal percentage … Scored two goals in two separate matches: Against Northern Iowa during the 12th and 21st minutes of play (Sept. 1) and against Mississippi State (Sept. 9) … Assisted Claire Kelley during the 77th minute of play to lift Arkansas past Vanderbilt 1-0 during the SEC Tournament quarterfinals (Nov. 2) … Scored on a penalty kick against second-seeded Auburn during the SEC Tournament semifinal match … Selected into SEC All-Conference Freshman Team … After participating in her first SEC Tournament, McKeon was named into the SEC All-Tournament Team … Selected to the TopDrawerSoccer.com ‘Team of the Week’ list on Aug. 23, 2016 after scoring goals during consecutive road matches to open the 2016 season … Ranked No. 29 by TopDrawerSoccer.com on its ‘Women’s Freshmen Top 100’ list.