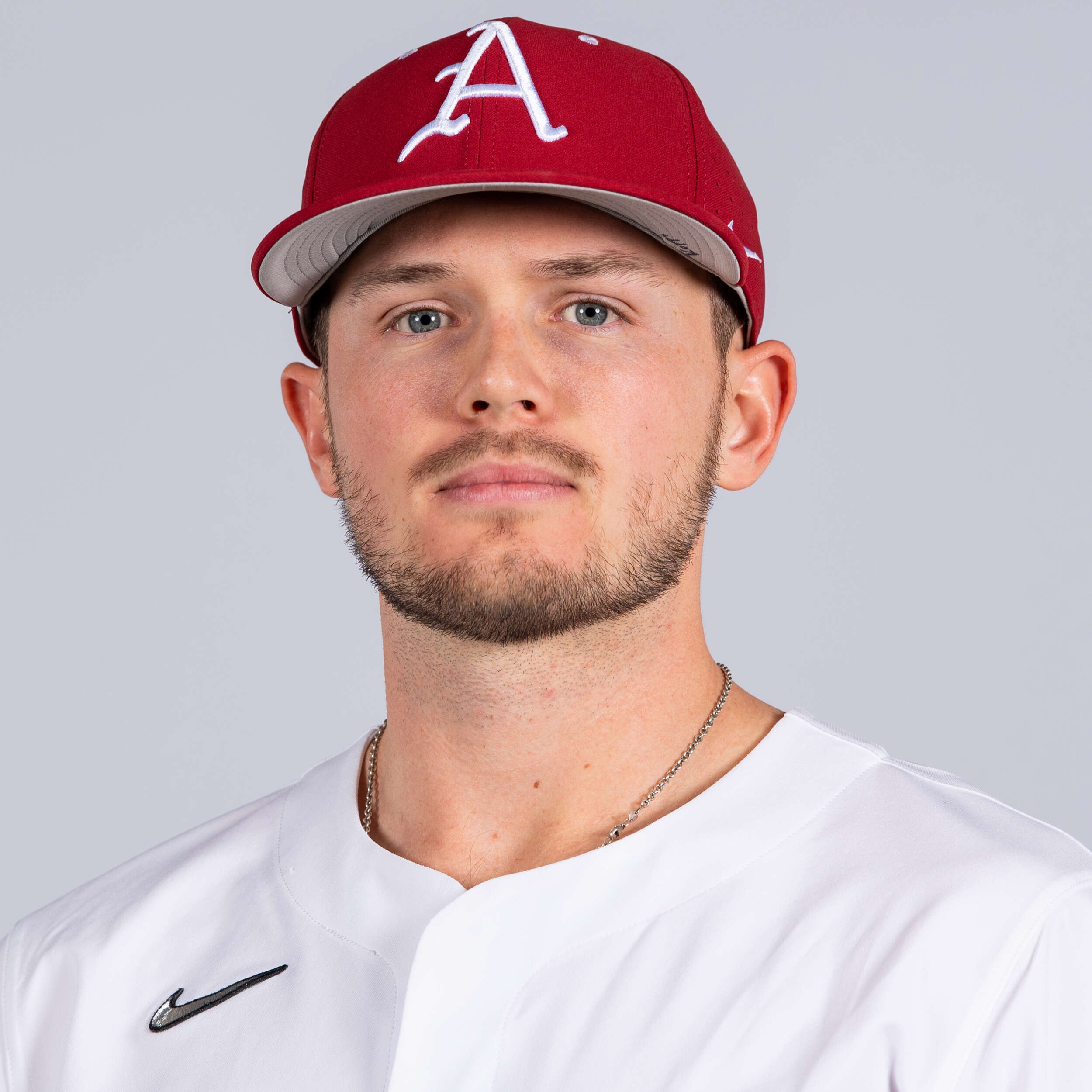 Made a team-high 33 appearances on the mound, including one start … Posted a 12-1 record with 11 saves, logging a school-record 0.90 ERA (min. 45.0 IP) in 89.2 innings of work … Struck out 131 batters, the third-most total in program history, while walking just 18 and allowing only nine earned runs all season … Punched out at least one batter in all 33 of his appearances, including 29 multi-strikeout efforts … Lone start of the season came against NC State in a must-win Game 3 of the NCAA Tournament Super Regional (June 13), striking out a season-high nine in 8.0 innings … Member of an Arkansas pitching staff that set a school record with 657 strikeouts in 2021 … Named one of five finalists, along with US Olympic gold medalists Simone Biles (gymnastics), Caeleb Dressel (swimming), Athing Mu (track and field) and Maddie Musselman (water polo), for the Amateur Athletic Union (AAU) James E. Sullivan Award, presented to the most outstanding athlete in the United States.

Redshirt Junior (2020)
Made seven total appearances, including one start, on the mound in 2020 … Logged an 8.18 ERA with an 0-1 record in 11.0 innings, allowing 14 runs (10 earned) on 18 hits and four walks while striking out nine … Inherited seven runners in relief efforts, allowing four to score … Retired the first batter he faced out of the bullpen 50 percent of the time (3/6) … Closed out the season opener against Eastern Illinois on Feb. 14 … Pitched a scoreless frame with one hit allowed and one strikeout … First reliever used against Gonzaga on Feb. 20, allowing three runs on four hits over 2.1 innings … Longest outing of the season at that point … Appeared again in the series on Saturday in game three (Feb. 22), tossing a scoreless inning with one walk … Second shutout outing this season … Entered as first reliever vs. No. 22 Oklahoma (Feb. 28) at the Shriners College Classic in Houston … Kept OU off scoreboard in sixth, but allowed three runs in seventh to earn first decision in 6-3 loss … Worked 3.1 innings as the first reliever against Illinois State on March 3 … Allowed two runs, one earned, on five hits, striking out five … Second time in his career with five strikeouts, last doing so in his first start/appearance on Feb. 19, 2017, against Miami (Ohio) … Gave up three runs on two hits and two walks against South Alabama on March 6 … Made his first start since his freshman season in Arkansas’ final game of the year against Grand Canyon on March 11 … Pitched 1.2 innings, allowing three runs on three hits and a walk, striking out two, exiting with the game tied at three.

Redshirt Sophomore (2019)
Made a team-high 30 appearances, all in relief, one year after having Tommy John surgery … Generated a 3.89 ERA and a 6-3 record in 41.2 innings … The six wins were tied for the third-most on the team … Also made 16 appearances in conference play, building up a 4-3 record and a 4.35 ERA … Pitched 20.2 innings against SEC opponents with 10 runs allowed and 25 strikeouts … Earned conference wins against Auburn (April 5), Mississippi State (April 19), Tennessee (April 26), LSU (May 10) … Also earned the win in the SEC Tournament against Ole Miss (May 22), going 1.2 innings and allowing just one run on two hits and striking out two … Only gave up one run in his first 10 appearances, coming off a home run against Stony Brook (March 1) … Also walked just four over that same span and struck out 17 … Only worked more than two innings four times, twice coming in the NCAA Tournament (vs. Ole Miss – June 9; vs. Texas Tech – June 17) … Pitched a season-high 4.0 innings against LSU (May 10), giving up just one hit, one walk and striking out four … The four strikeouts tied a season-high, which he matched four times throughout the season (at Alabama – March 24; vs. Central Connecticut St. – May 31; vs. Texas Tech – June 17) … Notched 19 scoreless outings, five of two innings or more.

Redshirt Sophomore (2018)
Did not appear in a game after undergoing Tommy John surgery … Earned a medical redshirt.

Made 22 appearances with five starts in his first full season … Generated a 3.31 ERA and a 3-1 record over 49.0 innings with 40 strikeouts … Also totaled two saves against New Orleans (March 22) and at Texas A&M (May 20) … Made 10 appearances in conference play, all out of the bullpen … Allowed just nine earned runs in 25.0 innings for a 3.24 ERA, the second-lowest among all Razorbacks pitchers with 10.0 or more innings … Earned a victory in his first collegiate start against Miami (Ohio) (Feb. 19), going 3.1 innings, while allowing one run with a career-high five strikeouts … Also earned the win against Georgia (April 15) after a career-high 5.2 scoreless innings out of the bullpen with three strikeouts … Earned the start in the SEC Tournament Championship against LSU (May 28) … Gave up just one earned run over 3.0 innings with one strikeout and no walks … Struck out four or more batters four times (Miami [Ohio] – Feb. 19; at Missouri – March 26; at Alabama – April 1; at Texas A&M – May 20) … Started game one of the NCAA Fayetteville Regional final against Missouri State (June 4), throwing 2.0 innings and allowing two earned runs with two strikeouts in the 11-10 win … Notched 11 scoreless outings, seven of two innings or more.

High School
Played for head coach Greg Kobza at George Ranch High School … 23-5A All-District MVP pitcher … Two-Time All-State honorable mention … Two-Time All-Greater Houston selection … In his junior and senior seasons, struck out 172 out of 524 batters faced with a 17-4 overall record … Batted over .300 in the regular season and playoffs combined … Graduated with a 4.0 GPA … Member of the National Honor Society … Most memorable athletic moment was pitching in the Connie Mack World Series.

Personal
Son of Rick and Michelle Kopps … Has one sister, Ashley … Ashley played softball at Sam Houston State … Chose to attend Arkansas he feels it is the best place for him to reach his full potential as a player … Ambition is to impact a lot of people as well as bring positive change to the hospital he will work in … Plans to become an orthopedic surgeon after his playing career is over … Involved with League of Champions, a baseball program in his hometown that mentors children with special needs … Majoring in biomedical engineering.