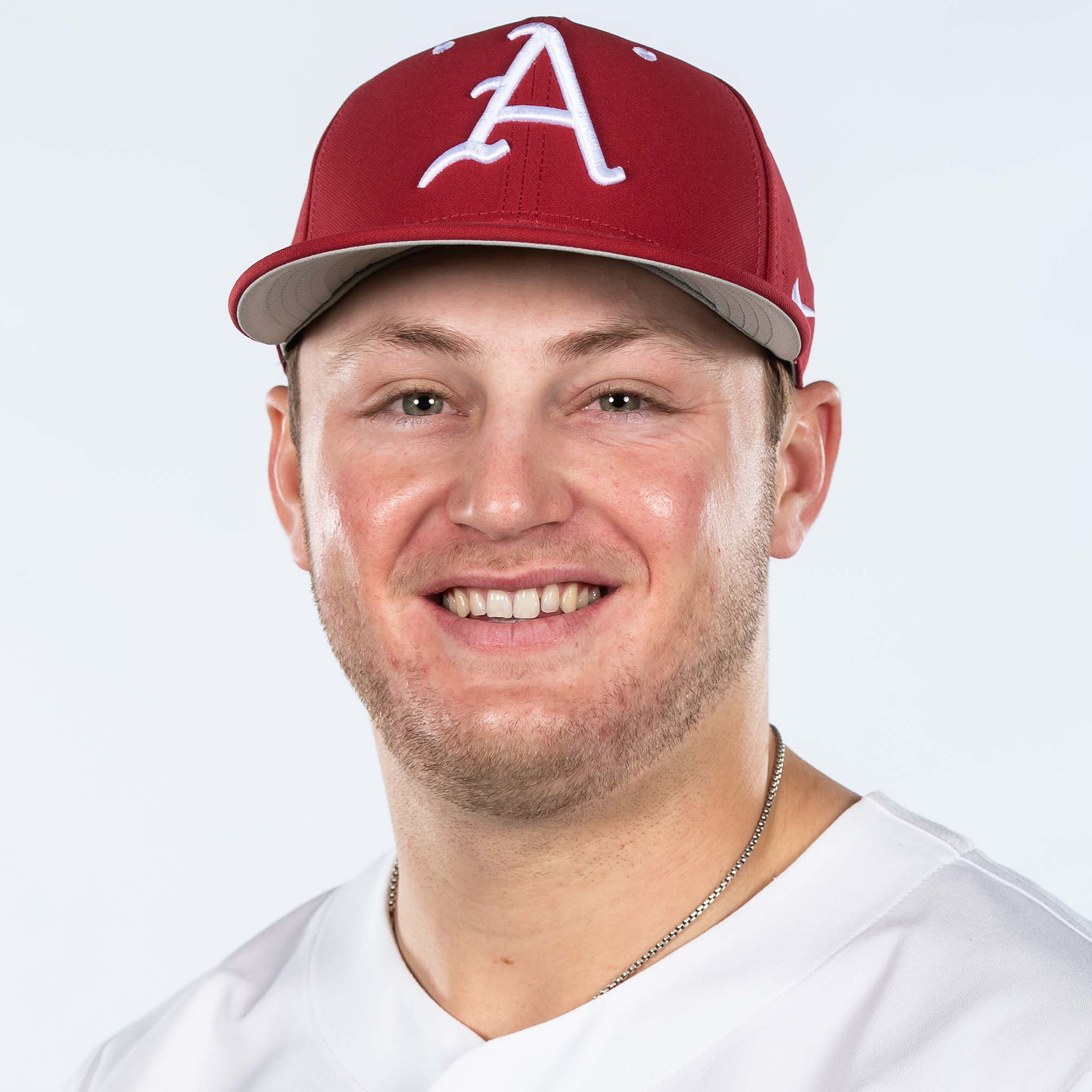 Made 31 appearances, including two starts, on the mound … Posted a 3-2 record with a 4.80 ERA and three saves in 50.2 innings … Racked up 61 strikeouts and limited opposing hitter to a .226 batting average … Allowed 30 runs (27 earned) on 44 hits and 19 walks … In SEC play, posted a 4.50 ERA over 12 appearances … Struck out 22 in 16.0 innings, all of which were in relief … Tallied a season-high six strikeouts against Illinois State (Feb. 20), earning a four-inning save in the process … Named to the Karbach Round Rock Classic All-Tournament Team after picking up a pair of saves vs. Indiana (Feb. 25) and vs. Louisiana (Feb. 27) … Matched his season high with six strikeouts in a three-inning save against the Hooisers … Locked down his third save of the season with a scoreless frame against the Ragin’ Cajuns … Threw three scoreless innings in relief at Florida (April 8) … Earned his first start of the season in game one of a doubleheader against UAPB (April 12), twirling three perfect innings with five strikeouts and picking up his first win of the year … Also started against Arkansas State (April 19), earning his second win of the season after tossing three innings of one-run ball … Fanned five in 2.2 innings at Texas A&M (April 25), allowing two runs (one earned) in the relief outing … Tallied five strikeouts in a two-inning relief appearance against Missouri State (May 3) … Threw two perfect frames with four strikeout at Alabama (May 20) … Made six appearances in the NCAA Tournament, beginning with two scoreless frames in relief vs. Grand Canyon (June 3) in the NCAA Stillwater Regional … Racked up three strikeouts against the Lopes … Came out of the bullpen to face No. 11 Oklahoma State (June 6) and piled up five strikeouts in 2.2 innings of three-run ball … Pitched in two games at the College World Series: vs. No. 2 Stanford (June 18) and vs. Ole Miss (June 20) … Member of a Razorback pitching staff that set a new school record with 674 strikeouts in 2022.

Made 13 appearances, including three starts, on the mound … Logged a 2-1 record with a 6.75 ERA in 24.0 innings of work … Recorded one save, the first of his career … Struck out 29 while allowing 20 runs (18 earned) on 33 hits and eight walks … Struck out four in three innings of relief against Memphis (March 24) … Made his first start of the season against UCA (March 30), fanning a pair while allowing three runs (two earned) over four innings … Struck out a season-high seven in a start against Little Rock (April 7), pitching a season-long 4.2 innings in the contest … Third start of the year came against UAPB (April 14), punching out four in two scoreless frames … Pitched out of the bullpen against NJIT (June 4) in the NCAA Fayetteville Regional, striking out three in two innings of relief … Member of an Arkansas pitching staff that set a school record with 657 strikeouts in 2021.

Junior (2020)
Started three games and made two appearances in relief in 2020 … Put together a 1-1 record, earning the win in relief and dropping one of his starts … Finished with a 4.40 ERA over 14.1 innings of work on the mound, allowing eight runs, seven earned, on 17 hits and five walks … Struck out 14, one of seven Hogs to strike out 10 or more batters in 2020 … Retired the first batter he faced as a reliever in both outings, but allowed both inherited runners to score … Appeared as the first reliever on Sunday, Feb. 16, against Eastern Illinois … Worked 2.0 innings of relief, allowing just one hit and one walk, striking out two, to earn the victory … Second consecutive year to enter in relief in his first appearance of the year and come away with the win … 16th career shutout outing … Made his first start of the 2020 season on Feb. 20 against Gonzaga … Went 2.2 innings, allowing two runs on four hits & two walks, striking out two … Fifth career start … Worked 1.2 innings in relief on Sunday, Feb. 23, against Gonzaga, allowing one run, unearned, on two hits … Picked up his second start of the season, first on normal rest and delivered five strong innings against Baylor on March 1 … Allowed just two runs on four hits and a walk, striking out six, one off a career-high … Most innings pitched since a start against Northwestern State on April 23, 2019 … Second time in his career to go 5.0 frames … Started the finale against South Alabama (3/8), allowing three runs on six hits over three innings … Struck out four in the contest, allowing season-highs in hits and runs … Part of a pitching staff that finished with a 3.68 ERA and 143 strikeouts over 142.0 innings of work.

Sophomore (2019)
Made 24 appearances with two starts … His appearance total tied for third-most on the team … Compiled a 5.25 ERA and a 7-1 record, the second-most wins on the pitching staff … Also totaled 53 strikeouts while giving up 35 earned runs in 60.0 innings … Walked 29 batters and held opponents to a .260 batting average … Made nine appearances in SEC play, going 1-0 with a 7.09 ERA in 26.2 innings … Struck out 20 batters in league play and walked 11 for a 1.8 strikeout-to-walk ratio … Pitched 2.0+ innings in 13 of his final 17 appearances of the season and eight of those outings were in conference play … Threw 3.0+ innings in five of his seven victories … Earned the win in his first three appearances, all in relief (vs. Eastern Illinois – Feb. 16; at USC – Feb. 21, vs. Stony Brook – March 1) … All three of those appearances consisted of 2.0+ innings, the final two were 3.0+ innings … Struck out 10 batters over that three-game stretch and allowed just one unearned run … Did not give up an earned run in his first 12 innings of the season, walking only three during that same stretch … Went a career-long 5.0 innings in his first start of the season (vs. Northwestern State – April 23), allowing just one run on five hits, striking out five and walking one … Struck out a career-high seven batters in a 4.0-inning start against Grambling State (April 30) at Dickey-Stephens Park in North Little Rock … Walked a career-high five batters at No. 15 Auburn (April 5) in 4.2 innings of relief, his longest relief appearance of his career and the first time he had allowed more than two walks in an outing in 33-straight appearances … Made three appearances in the postseason, two coming in the SEC Tournament and one in the NCAA Super Regional against Ole Miss … Gave up just one run in three innings of the SEC Tournament, coming against Georgia (May 23) and struck out a combined three.

Freshman (2018)
Made 21 appearances with two starts … His appearances were the most for any freshman Razorback pitcher and the fourth-most on the pitching staff … Compiled a 4.00 ERA over 36.0 innings with 50 strikeouts and only 16 earned runs … Only walked 16 batters and held opponents to a .261 average … Made six appearances in conference play and only gave up five earned runs over 11.1 innings, while striking out 16 … Made four appearances in the NCAA Tournament, three coming in the College World Series … Struck out six over 4.2 innings in the College World Series … Made his first collegiate appearance against Bucknell (Feb. 16), striking out four over two innings while allowing just one hit … Made his first collegiate start against Kentucky (March 17) … Also started the regular-season finale against Georgia (May 19), throwing a season-high 4.2 innings and allowing only two earned runs with a season-high five strikeouts … Picked up his first collegiate win against Missouri State (April 17) … Had five appearances with four or more strikeouts (vs. Bucknell – Feb. 16; vs. Kent State – March 9; at Ole Miss – March 30; vs. Grambling State – April 10; at Georgia – May 19).

High School
Played for head coach Larry Vucan at Southlake Carroll High School … Ranked No. 63 in the state of Texas by Perfect Game … Attended the 2015 Perfect Game South Underclass Showcase … Went 8-2 on the mound as a junior with a 1.10 ERA and 75 strikeouts in 70 innings pitched … Named First Team 7-6A All-District in 2016 … Was 3-1 as a sophomore with a 2.37 ERA and 40 strikeouts … Also played football for Southlake Carroll … Played summer ball with the Dallas Patriots-Stout Team.