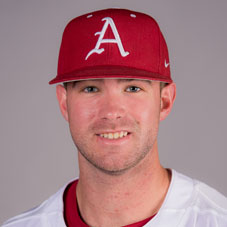 As a Junior (2017)
Started all 64 games as either the designated hitter or left fielder … Hit .294 with 73 hits, nine home runs, and 49 RBIs … Hits, home runs, and RBIs were all career-bests … Produced a .448 slugging percentage and walked 30 times for a .366 on-base percentage … Made only one error in 55 chances for a .982 fielding percentage … Notched 24 multi-hit games to lead all Razorbacks and six games with a career-high three hits … Also had 15 multi-RBI games, second-most on the team … Hit .300 for the NCAA Fayetteville Regional with two multi-hit games vs. Missouri State (June 3 and June 4) … His three hits against the Bears in the regional semifinals tied a career-high … Had a season-long seven-game hitting streak running from game two against Alcorn State (March 15) through game two at No. 18 Missouri (March 25) … During the seven-game streak, he went 13-for-27 (.481) with five multi-hit games, five RBIs, and two home runs … Tied a career-high two doubles at No. 10 Auburn (April 22), part of a 2-for-3 game with one RBI … Stole his first career base at No. 22 Texas A&M (May 18) … Notched the walk-off single in the bottom of the ninth against Rhode Island (March 10) to help claim Arkansas’ fourth series win of the year … Went 2-for-5 in that game with the lone winning RBI against the Rams … Won SEC Player of the Week honors after hitting .400 for the week against Missouri State (April 11) and Georgia (April 13-15) with two home runs and 11 RBIs over a four-game span … Went 5-for-14 (.357) at the plate against Georgia with four of those hits coming with runners on base and three with two outs … Hit final home run of the season in the first inning against Mississippi State (May 25) in the SEC Tournament, one of 10 home runs hit by the Hogs during the tournament.

As a Sophomore (2016)
Started 48 of 49 games played as the team’s primary left fielder … Hit .304 with 52 hits, team-best eight home runs and 39 RBI … One of two Razorbacks to hit over .300 and his 39 RBI were also a team-high … All offensive totals were new career-bests … Produced a .509 slugging percentage and walked 26 times for a team-leading .402 on-base percentage … Made only one error in the field for a .977 fielding percentage … Hit his first career home run vs. Central Michigan (Feb. 21), a three-run homer … Set single-game career-highs in hits, runs, RBI and walks … Had a career-high three hits three different times against Mississippi Valley State (Feb. 23), Western Illinois (March 12) and ULM (April 12) … Three hits against Mississippi Valley State also included four runs scored and five RBI, all career-highs … Notched 14 multi-hit games and nine multi-RBI games … Had a season-long eight-game hitting streak running from game three against Missouri (April 3) through game two vs. No. 2 Florida (April 15) … During the eight-game streak, he went 13-for-33 (.394) with five RBI, two home runs and five runs scored.

As a Freshman (2015)
Saw action in 28 games during the 2015 season, hitting .177 with one double and seven runs batted in … Recorded his first collegiate hit in the season-opener against North Dakota (Feb. 13) … Tallied his first RBI against Gonzaga (March 10) … Scored a season-high two runs against Stephen F. Austin (April 15) … Recorded his only multi-RBI game of the year on the road at No. 1 Texas A&M, helping Arkansas secure a series win against the top-ranked Aggies … Had a season-high three walks against Stephen F. Austin (April 15) … Recorded a hit and scored a run in his only plate appearance in the NCAA Fayetteville Super Regional against Missouri State (June 5).

IMG Academy (FL)
Ranked as the 57th-best recruit nationally and the third-best recruit in the state of New Jersey according to Perfect Game … Named a Perfect Game Preseason First Team All-American in 2014 … Named Northeast All-Region first team … Named to the Perfect Game Florida All-State Team in 2014 and a Perfect Game state of Florida top hitter in 2014 … Hit .379 with three home runs and 19 RBI in 2014 in 24 games played … Ranked 187th nationally and a top five prospect who got away in the 2014 MLB Draft by Baseball America … Ranked as a top five college summer league player and ranked No. 2 top prospect in 2014 by FCBL.

Personal
Son of Dave and Susan Bonfield … Has one sister, Caroline … Recreation and sport management major.