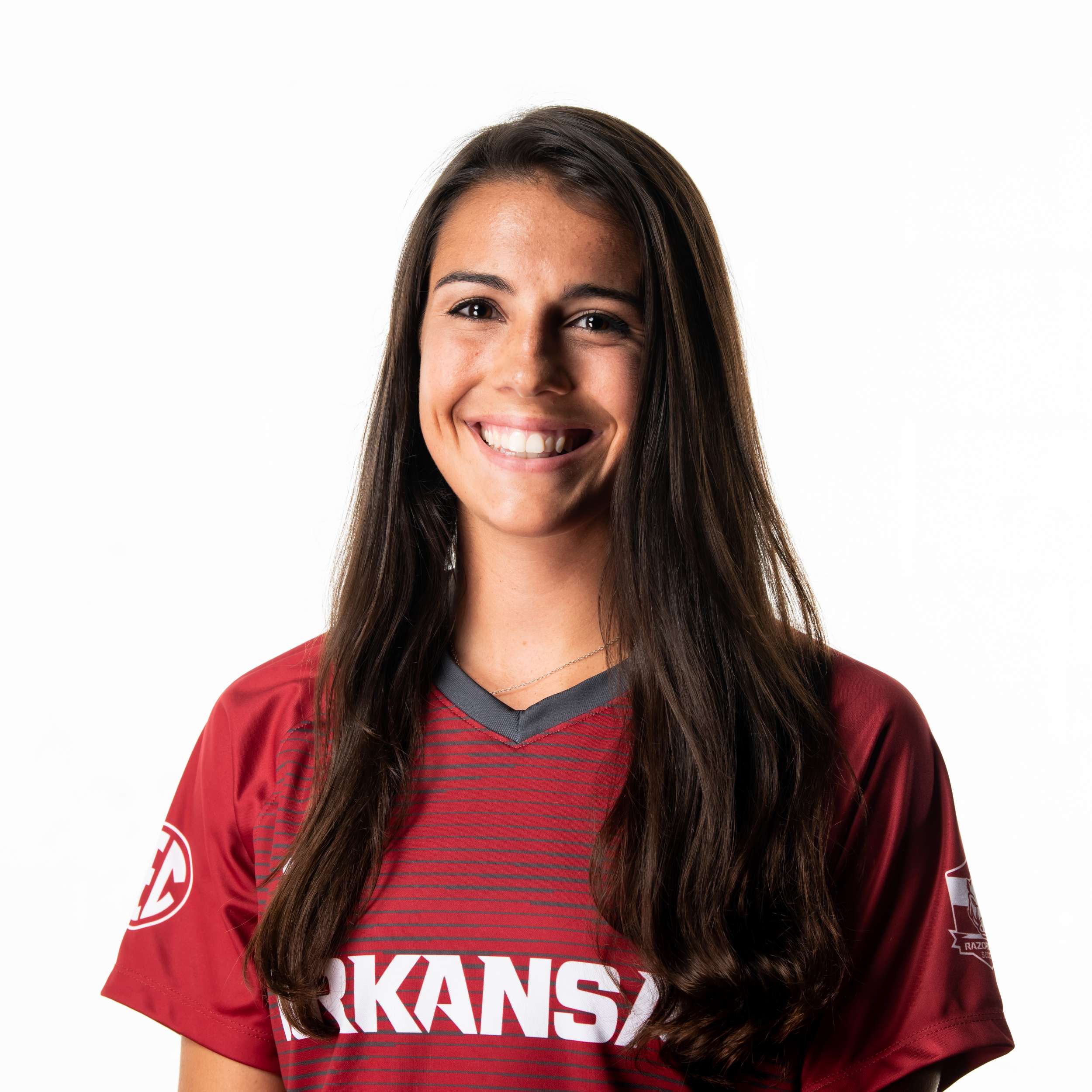 As a Senior (2019)
Played in 15 matches, logging 197 minutes … Netted a goal against Lamar on Sept. 5 and had three shots in the match with two finding the frame … Made an appearance in both of Arkansas’ NCAA Tournament matches against North Texas (Nov. 15) and NC State (Nov. 21) … Her 34 minutes against Lamar were a season-high.

As a Junior at Arkansas (2018)
Played in 22 matches, starting three … Made Razorback debut in season-opener against Duquesne (Aug. 17), getting the start and logging 45 minutes … Also saw action in two SEC Tournament matches, including the SEC Tournament final (30 minutes vs. Ole Miss – Oct. 30; 3 minutes vs. LSU – Nov. 4) … Played a season-high 53 minutes in the 5-1 victory over Little Rock (Nov. 9) in the first round of the NCAA Tournament … Also logged six minutes of action in the second-round matchup against Virginia Tech (Nov. 16) … Notched only three shots on the year, working primarily as a defender … Named to SEC Fall Academic Honor Roll, majoring in Kinesiology: Exercise Science.

As a Sophomore at Miami (2017)
Played in five matches, starting each of the first four outings of the season … Played over 75 minutes four times, including going the distance on three occasions … Played all 90 minutes in the season opener against St. Francis (PA) (Aug. 18) to help Miami log a shutout … On the field for the full 90 minutes in the shutout at FIU (Aug. 20) … Played the entire 90 minutes at Miami (OH) (Aug. 25) in the Hurricanes’ third clean sheet in a row … Logged 79 minutes of action at Cincinnati (Aug. 27) … Played in Miami’s matchup versus fifth-ranked North Carolina (Oct. 5).

As a Freshman at Miami (2016)
Played in 10 matches with eight starts, the latter third-most among Miami freshmen … Tallied a pair of assists to rank third on the team among freshmen … Started each of the first eight matches of her career, going the distance in six of them … Played 70-plus minutes eight times … Helped the Hurricanes set program records for fewest goals allowed (16) and lowest goals against average (0.82) … Made her college debut at North Florida (Aug. 19) and was one of three players to go all 90 minutes, aiding the team to a shutout … Played all 90 minutes in the win at Stetson (Aug. 21), logging her first-career point with an assist in the 79th minute … Went the distance versus Ohio State (Aug. 26) in her first-career home match … Played the full 90 minutes in the shutout of Miami (OH) (Sept. 2) … Went the whole 90 minutes and logged an assist on the match’s lone goal versus Florida Atlantic (Sept. 4), helping the Hurricanes notch their third straight shutout … Went the distance in the match versus FIU (Sept. 11) … Saw the first ACC action of her career at No. 15 North Carolina (Oct. 6).

High School
Four-year starter at Siegel High School … Team captain as both a senior and junior … Played in the 2015 Girls’ High School All-American Game in Raleigh, N.C. … Selected as the Defensive Player of the Game at the 2015 Tennessee East-West All-Star Game … Four-time First Team All-District 7-AAA honoree, four-time The Daily News Journal All-Area Team choice and three-time first team all-state pick by both the THSSCA (coaches) and TSWA (sports writers) … As a senior, tallied six goals and 13 assists, while aiding her team to 11 shutouts, a 12-3-1 record, a second-place conference finish and a state playoff appearance … Following her senior season, named All-District 7-AAA Defensive MVP and The Tennessean First Team All-Midstate, as well as both a Tennessee State Star and Mid-East Region Team choice by Top Drawer Soccer  … Also, for the second straight year, was both The Daily News Journal MVP and a First Team All-State choice … Logged five goals and 10 assists as a junior, leading her team to a 12-5-4 record, a conference title and a state playoff berth … Earned All-District 7-AAA Midfielder of the Year honors after her junior campaign … Chosen as the All-District 7-AAA Freshman of the Year after helping her team reach the state finals … Member of the National Honor Society and the Beta Club, as well as an AP Scholar.