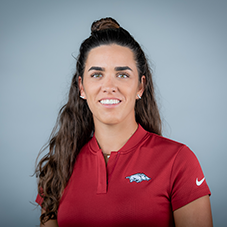 AS A SOPHOMORE (2016-17)
First full season with the Razorbacks after joining the team in January of her freshman season … Won first event of the fall (second of her career) at the ANNIKA Intercollegiate … Posted career-low 205 at ANNIKA with rounds of 71-66-68 … Seven rounds of par of lower in four fall events … Finished fall with a 71.83 stroke average … Played in every event of the season … Had three top-10 finishes … Her win at the ANNIKA was the second of her career and the second time she won the first event of the year as a Razorback … Was one of Arkansas’ top two finishers in five events as a sophomore … Earned a Monday qualifying spot at the NWA Championship in 2017.

AS A FRESHMAN (2015-16)
Women’s Golf Coaches Association All-American Honorable Mention as a freshman … Named All-SEC Second-Team and to the SEC All-Freshman Team … Joined the team in January after graduating high school early (December) … Qualified and played in all seven spring tournaments since joining the team in January … Been Arkansas’s low finisher in first five tournaments of her Razorback career … First Razorback to win her first-ever tournament as a freshman shooting 208 at the Lady Puerto Rico Classic … Four top-10 finishes in first five events … Season/Career bests include a single-round 67 (second round of Puerto Rico) and three-round total 208 (Puerto Rico) … Leads Razorbacks with a 72.80 stroke average … Ranks No. 15 on the SEC leaderboard and as the fourth-ranked freshman … Ranks No. 11 on Golfweek rankings … Ranks No. 55 on WAGR.com … Win/loss record of 470-128-26 in spring tournaments.

PRIOR TO ARKANSAS
Becomes the third star from Mexico to join the Razorbacks after signing in November 2015 … She finished high school early and joins the team for the second semester in January 2016 … Following on the heels of the recent success of seniors Gabriela Lopez and Regina Plasenica, Fassi also advanced through qualifying to play in the U.S. Women’s Open last summer … . She finished as a runner-up in the South American Women’s Amateur and was the top-ranked female amateur in Mexico, according to the Mexican Golf Federation … Fassi won the Mexican Amateur in 2015 and recently in 2016, playing with several of her Razorback teammates … Other major events Fassi took part in prior to joining the Razorbacks include three appearances at the U.S. Girls Junior Championship (2012, 2013, 2015), two trips to the U.S. Women’s Amateur (2013, 2015) and the Spirit International (2015) winning the event.

PERSONAL
Fassi hails from Pachuca, Hidalgo, Mexico and was born March 25, 1998. She is the daughter of Andres Fassi and Fabiana and attended UFD High School. She as two older brothers, Sebastian and Juan Pablo, and a younger brother, Fronco.

FROM SHAUNA TAYLOR
Convincing Maria to become a Razorback would not have been possible without the help of Gaby Lopez. They have been friends for quite some time and the great experience Gaby had as a student-athlete at The University of Arkansas definitely proved helpful in the recruiting process with Maria. I have watched Maria compete and play over the past few years and she possesses many of the intangibles that you just can’t teach. She has had many great competitive experiences across the world and when you couple that with her great length you have a recipe for success. Maria is a special athlete and I know she will leave her mark on program moving forward.