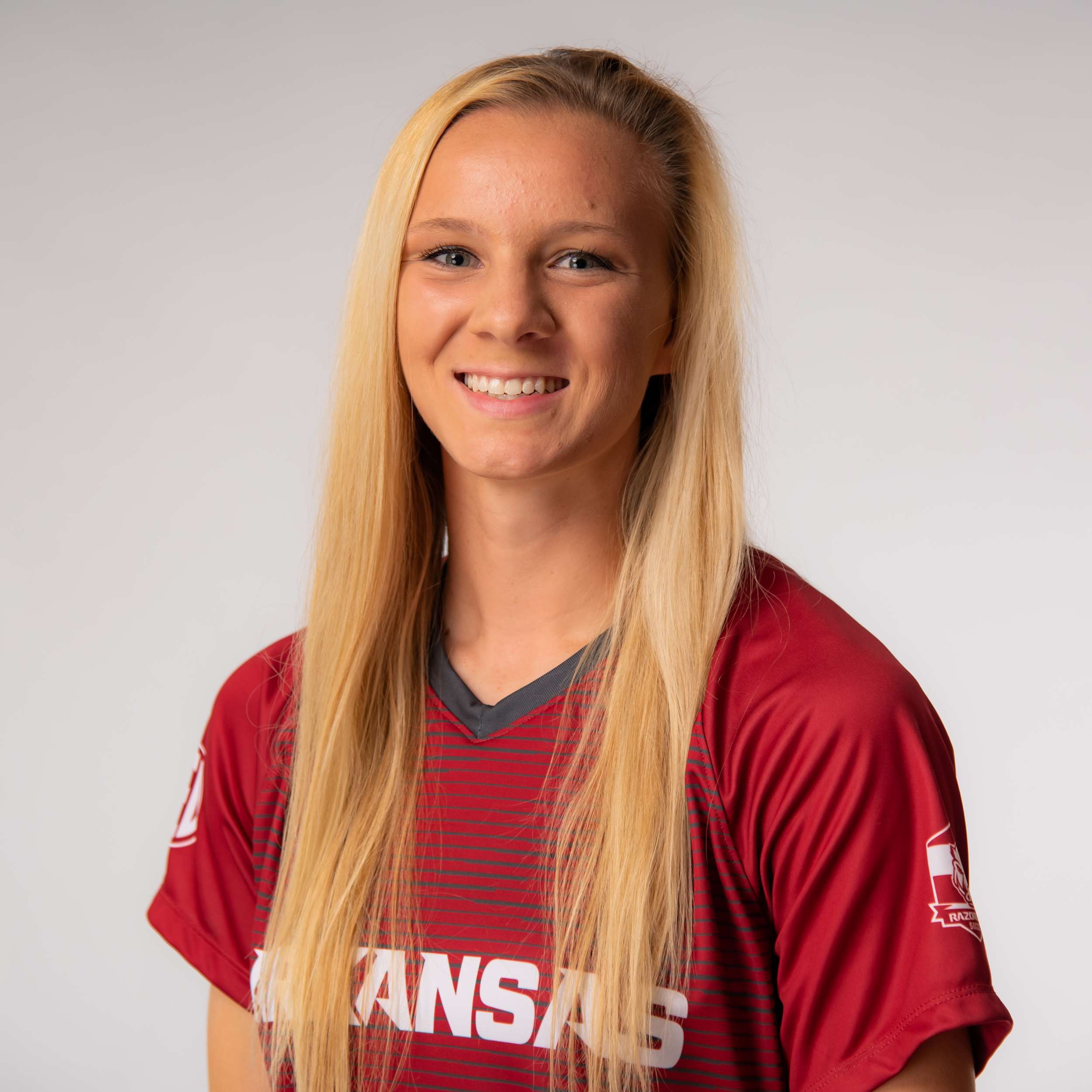 As a Junior at Arkansas (2018)
Played in 23 games, starting nine contests … Started seven of Arkansas’ final eight matches of the season, including both NCAA Tournament matches … Scored four goals and notched four assists for 12 points, fifth most on the team … Also had two game-winning goals, tying for the second most on the team … Game-winning goals came against Omaha (Aug. 24) and No. 21 Auburn (Oct. 21) … Secured her first career brace in the third match of the season (vs. Omaha, Aug. 24), part of a 2-0 victory … Also scored against UConn (Sept. 9) in the 38th minute to tie the match at 1-1 and eventually lead to a 3-1 Razorback win … Totaled a career-best two assists in a 4-0 SEC Tournament-opening victory over Ole Miss (Oct. 30) … Followed that up with another assist on the game-winning goal against Florida (Nov. 2) in the SEC Tournament semifinals to help Arkansas reach its third-consecutive SEC Tournament final … Played 80 or more minutes twice, including in the NCAA Tournament Second Round match against Virginia Tech (Nov. 16) … Named to SEC Fall Academic Honor Roll.

As a Sophomore at Baylor (2017)
Played in eight matches for the Lady Bears, starting one (at Portland – Sept. 8) … Scored one goal in 227 minutes and registered 10 shots with four on goal … Her lone score coming in the season opener against Louisiana-Lafayette (Aug. 18) … Played in two conference matches (vs. Iowa State – Sept. 24; at Oklahoma St. – Oct. 1) … Was one of 12 Baylor players to record at least one goal during the season.

As a Freshman at Baylor (2016)
Played in two matches, totaling one shot in 78 minutes played … Big 12 Commissioner’s Honor Roll selection in both the fall and spring semesters … Baylor Dean’s List honoree in the spring semester.

Club
Played defender for Dallas Sting ECNL U18 league … Helped team to No. 7 national ranking in 2015-16 … Despite injuries, played for Sting team that finished ranked No. 7 nationally in 2014-15 … Helped team end with No. 11 national ranking in 2013-14 … In first season with Sting, played on team that finished first nationally.