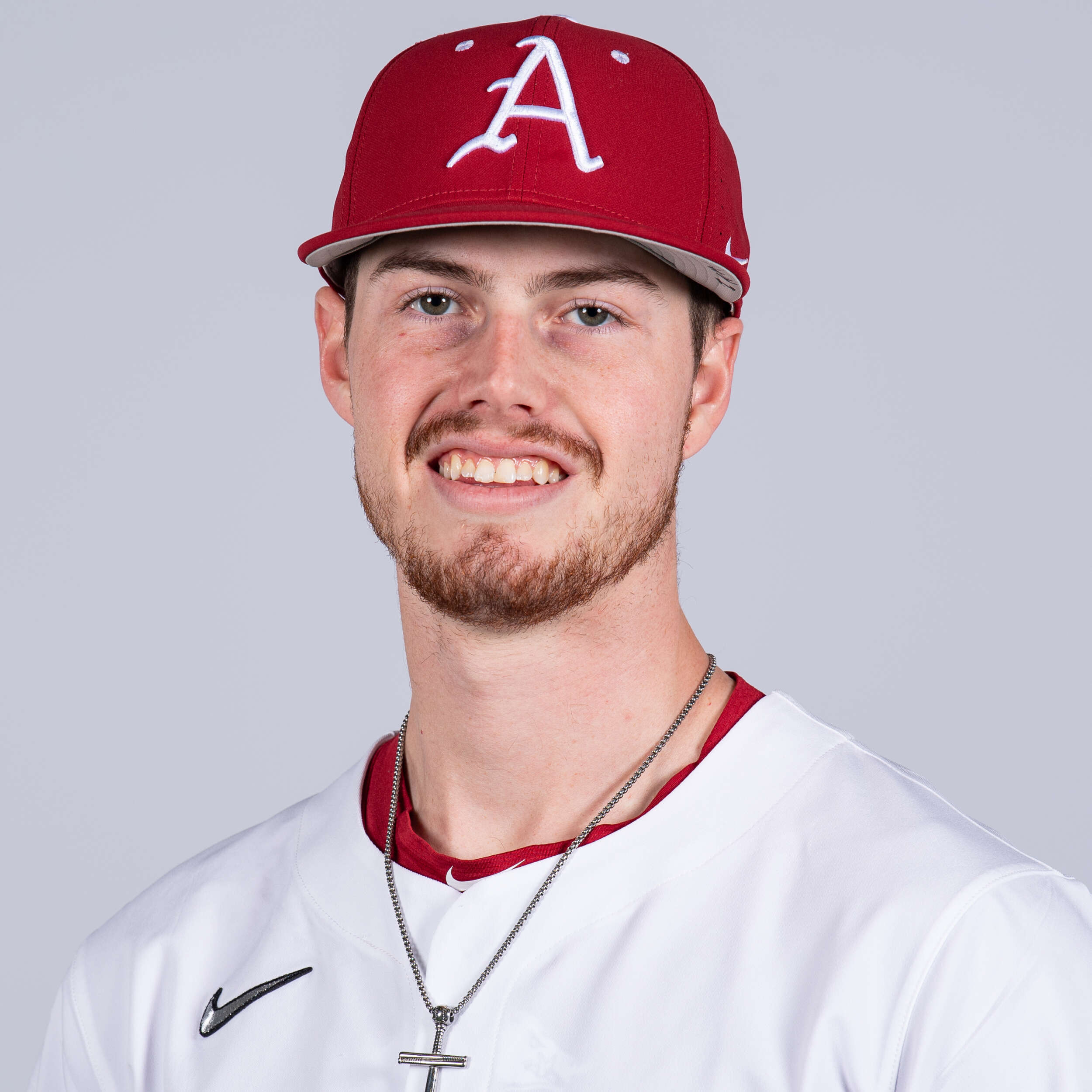 Played in 55 games with 54 starts (43 as designated hitter, six in right field, three at first base, two in left field), slashing .264/.386/.481 with 13 home runs and 38 runs batted in … Scored 43 runs on the year … Collected 53 hits with six doubles … Drew 38 walks, including a team-leading five intentional walks, and five hit-by-pitches … Totaled 100 bases, one of five Razorbacks to eclipse the century mark during the season … 14 multi-hit games and 10 multi-RBI games … Had a season-long eight-game hitting streak and reached base in 17 consecutive games … Perfect 3-for-3 in stolen base attempts on the year … Hit home runs in four consecutive games on two occasions during the season … Named SEC Player of the Week after hitting four home runs in a four-game stretch, going yard at home against Memphis (March 24) before swatting three home runs in a three-game series on the road at No. 2 Mississippi State (March 26-28) … Earned National Player of the Week honors from Collegiate Baseball Newspaper after a five-homer tear over four games, hitting two dingers against UAPB (April 14) and adding three more in a three-game series against Texas A&M (April 17-18) … Tallied three RBI against No. 3 Vanderbilt (May 27) to help Arkansas win its first SEC Tournament title … Named to the NCAA Fayetteville Regional All-Tournament Team after slashing .333/.353/.533 with a home run and two RBI against NJIT and No. 19 Nebraska (June 4-7) … Prior to the campaign, earned preseason first-team All-SEC honors from the league’s coaches … Part of a Razorback offense that hit a school-record 109 home runs in 2021 … Helped Arkansas set a school record in fielding percentage with a .980 mark for the year.

Junior (2020)
Started all 16 games at designated hitter in 2020 … Hit third or fourth in all 16 games, with nine games in the three-hole … Put together a .302/.492/.400 line at the plate over 63 at-bats as a junior for the Hogs … Recorded 19 hits, with three doubles and three homers, as well as 18 RBIs and 14 runs … Tied for the team-high in free passes, which included another team-best with 10 walks and one HBP … Tallied six multi-hit games and five multi-RBI performances … Opened the year with four hits against Eastern Illinois (Feb. 14-16), with a homer, four RBIs, three runs and a walk … Launched a three-run home run in the second game of the year … Followed it with a three-hit, two-run performance in the finale against the Panthers … Added another three-hit game vs. Gonzaga on Feb. 23, racking up three RBIs and a run scored in the series finale … Totaled four hits in the series against the Bulldogs (Feb. 20-23) … Had a hit in each of the final two games of the Shriners College Classic in Houston (Feb. 28-March 1), both RBI doubles … Notched a hit, a walk and a run against Illinois State on March 3 … Recorded four hits against South Alabama (March 6-8), a double and a homer, with four RBIs, four runs and five walks in the series … Posted a pair of two-hit games in the first two games of the set vs. the Jags … Produced multi-hit performances in both matchups with Grand Canyon (March 10-11), with three RBIs and two runs in the final game of the set, which included a monster home run over the videoboard in right-center field … Part of an offense that finished with a .310 average at the plate with 175 hits and 118 runs scored in 2020 … Before the season, earned preseason first-team All-SEC honors from the league’s coaches.

Arkansas’ top hitter, batting .345 over 58 games as the designated hitter with 70 hits, 16 doubles, two triples, five home runs and 47 RBIs … Also walked 34 times and built up a .444 on-base percentage … Hit .369 in conference play with 14 extra-base hits which led to his All-SEC Second Team selection … Finished the year with the seventh-highest batting average among all league players and sixth-highest on-base percentage … Ranked in the top-15 of the SEC in batting average (4th), slugging (14th – .544) and on-base percentage (4th – .463) … Tied for the fourth-most doubles (11) against SEC opponents and was one of eight players with two or more triples (2) in conference play … Led the team with a .273 batting average in the SEC Tournament and was named to the All-Tournament Team … Hit .333 (11-for-33) in the NCAA Tournament with home runs against TCU (June 2) in the regional and Ole Miss (June 8) in the super regional … Reached base safely in every game of the NCAA Tournament with hits in all but two games, including three multi-hit games …Went 4-for-11 (.364) in the NCAA Regional and capped the weekend with a three-hit, one home run performance in the final against TCU (June 2) … Notched 21 multi-hit games and 11 multi-RBI games, including five games of three or more hits and four games or three or more RBIs … Hit his first career home run against Oral Roberts (April 9), part of a 2-for-4 game with a career-high four RBIs … Tied a career-high three hits five times, the most recent coming in Game 2 of the NCAA Super Regional against Ole Miss (June 9), where he went 3-for-5 with a career-high two doubles and an RBI.

Freshman at San Jacinto Community College (2018)
Batted .355 in 58 games, while hitting seven home runs and notching 43 RBIs with 55 runs scored and nine stolen bases … Also walked 29 times and had 65 hits with 11 doubles and four triples … His run total was good for fifth in the nation, while his average (13th), home runs (23rd), hits (11th), RBIs (18th) and walks (19th) were all top-25 totals in the country among junior college players … Compiled a .464 on-base percentage, which was good for ninth in the nation … Was named to the NJCAA Region XIV All-Conference Team … Had a stellar month of March, hitting .418 (23-for-55) with 17 RBIs and a .500 on-base percentage … Helped lead San Jacinto to an NJCAA Region XIV conference championship and a 52-15 record … Played in the 2018 JUCO World Series, tallying a 4-for-15 (.267) performance at the plate over a five-game stretch with three runs scored and five RBIs.

High School
Attended Magnolia HS … Named Most Valuable Player (MVP) of the Class 5A state championship game as a junior … Won state title with Magnolia in 2016 and finished as a runner-up in 2017.