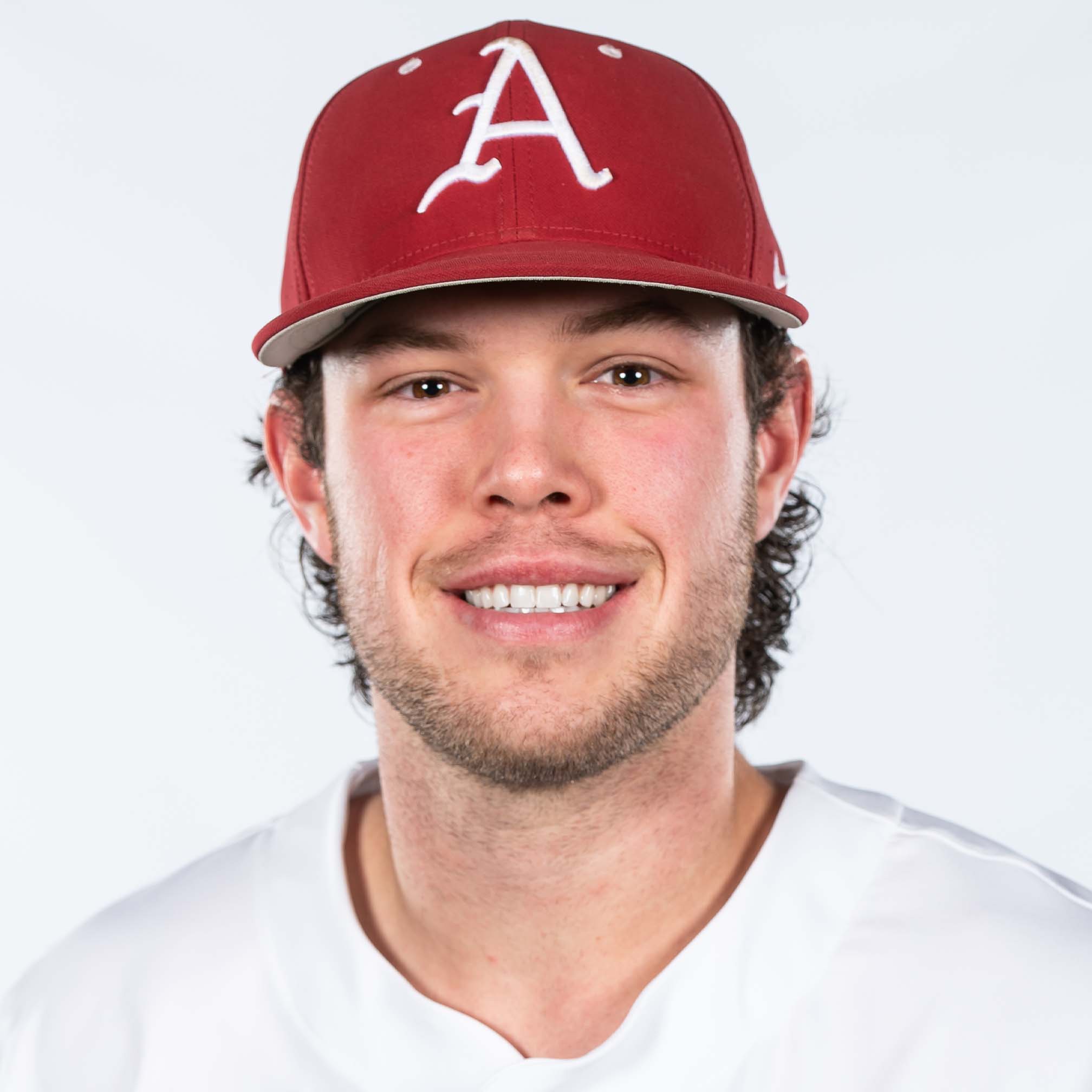 Played in 64 games with 63 starts (53 at catcher, five at first base, five as designated hitter), slashing .323/.388/.502 with nine home runs at 53 RBI … Scored 40 runs … Collected a team-leading 83 hits, including 17 doubles and one triple … Drew 27 walks … Was hit by three pitches and walked intentionally three times … Tallied 129 total bases, second most among Razorback hitters … Went a perfect 1-for-1 in stolen base attempts … Posted 21 multi-hit games, including eight three-hit games and a pair of four-hit efforts … Logged 15 multiple RBI games, including seven three-RBI games and one four-RBI performance … Season-long 12-game hitting streak was tied with INF Cayden Wallace and OF Chris Lanzilli for longest on the Hogs … Finished the season on a 12-game hitting streak, all of which came in postseason games … Had a season-long 18-game reached base streak … Defensively, committed only three errors in 588 total chances (.995 fielding percentage) … Tied with INF Peyton Stovall for the team lead in fielding percentage … Threw out 13-of-50 attempted base stealers (26.0%) … Picked off one runner … In SEC play, slashed .288/.343/.408 with two home runs and 16 RBI in 30 games … Totaled 36 hits, including nine doubles … Recorded his first two hits, including a double, and an RBI as a Razorback against Illinois State (Feb. 19) … Collected his lone triple of the season vs. Indiana (Feb. 25) in the Karbach Round Rock Classic at Dell Diamond in Round Rock, Texas … Hit his first home run as a Hog against Omaha (March 2), totaling three hits and three RBI in the ballgame … Two hits, including a double and a home run, with three RBI in game one of a doubleheader against Southeastern (March 5) … Had a season-high four hits, including a homer, and two runs batted in against UIC (March 12) … Drove in three runs on two hits, including a double, at Mizzou (March 25) … Recorded his first two-double game of the season against Little Rock (March 29), totaling three hits with two runs scored and an RBI … Swatted his first home run in SEC play against No. 15 LSU (April 15), finishing the game with three hits, including a double, and a pair of runs batted in … In the SEC Tournament, had two hits with a home run vs. Florida (May 27) … In the NCAA Tournament, slashed a team-leading .429/.451/.571 with two homers and 13 RBI … Tied with INF Peyton Stovall for the team lead in hits (21) during the postseason … Named the Most Outstanding Player of the NCAA Stillwater Regional after putting together a .455/.478/.545 slash line with five runs batted in over four games … Went 10-for-22 with a pair of doubles … Had multiple hits in three of his four games played … Had multiple runs batted in all four of the regional games … Three hits and three RBI vs. Grand Canyon (June 3) … Had two base knocks, including a homer, and four runs batted in at No. 6 Oklahoma State (June 4) … Homered for the second game in as many days at No. 6 Oklahoma State (June 5), finishing the game with two hits and two RBI … Went 1-for-4 with a double and two RBI in the elimination-game win at No. 6 Oklahoma State (June 6) to help the Razorbacks advance the super regional round … In the NCAA Chapel Hill Super Regional, went 3-for-9 with at least one hit in each game at No. 11 UNC (June 11-12) … Named to the College World Series All-Tournament Team after leading Arkansas with a .455/.478/.545 slash line … Went 10-for-22 with two doubles and five runs batted in over five games … Collected a season-high four hits vs. No. 2 Stanford (June 18) … Had a double and RBI vs. Ole Miss (June 20) before racking up three hits, including another double, with three runs batted in vs. Auburn (June 22) … Named a semifinalist for the Buster Posey National Collegiate Catcher of the Year Award … Helped Arkansas set a new school record in fielding percentage with a .982 mark for the year.

Junior at Kent State (2020)
Played and started in all 14 games, seeing time at catcher, first and third base … Recorded a hit in 12 of 14 games played … Tied for third on the team with three extra-base hits in 14 games.

Turned in a .369 batting average with 22 runs scored, 52 hits, and 42 RBIs … Slugged .539 with 12 doubles and four home runs … Belted two grand slams (at Ohio April 27 and at Bowling Green May 10), each lifting the Flashes out of a deficit to go and win the game … In MAC play, ranked second in RBIs (32) and third in batting average (.391) … Led the MAC in sacrifice flies (5) … Drove in a team-high six RBIs in a win at Bowling Green May 10, including his second grand slam of the season … Recipient of the Olga A. Mural Endowed Baseball Scholarship.

Personal
Father, Brian, was selected by the New York Yankees in the 40th round of the 1989 MLB Draft and played eight seasons of professional baseball.