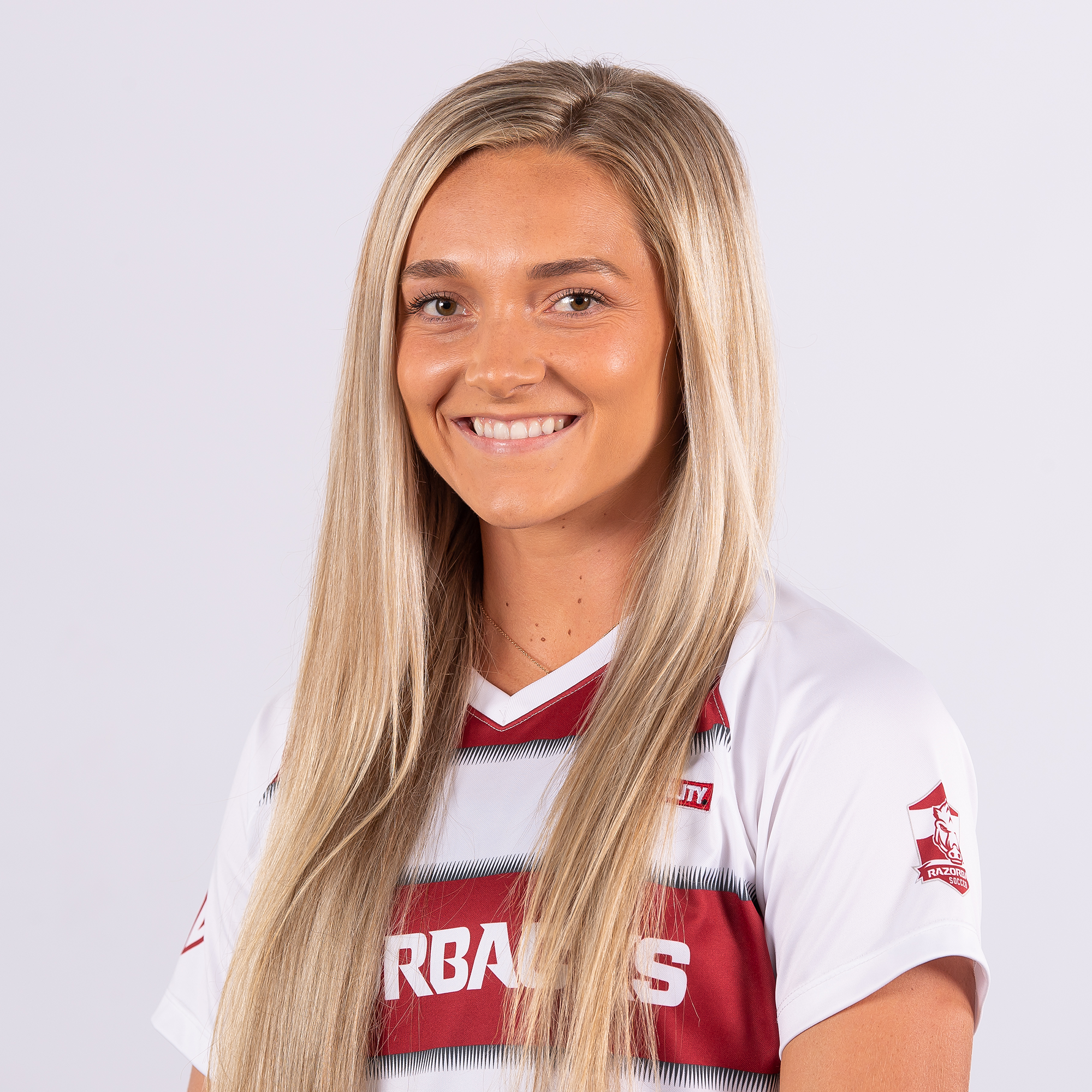 Got the start in all 16 matches, logging 1,183 minutes… Led the team with eight goals for the second time in her career and added three assists for 19 points… Had a team-high 48 shots, putting 25 on target… Put away two game-winners, including in the NCAA Tournament Second Round against Utah Valley (May 1)… Recorded a point in four of the final five matches to close out the season… Matched a season-high of 90 minutes played in the two NCAA Tournament matches… Her eight goals were tied for fourth in the league and was sixth in the conference in points… Became just the third United Soccer Coaches All-American in program history… Named the SEC Offensive Player of the Week on Oct. 5 after putting away an 11th-minute goal to help Arkansas upset No. 5 Texas A&M… Member of the TopDrawerSoccer Team of the Week (HM) on three occasions during the season… Selected by Racing Louisville FC as the first pick of the third round in the 2021 NWSL Draft… Named to the SEC Fall Academic Honor Roll while majoring in Exercise Science.

Started in all 23 matches and logged 1,320 minutes coming off an injury … Second on the team in points (29) and goals (10), both ranking in the top-five in the SEC … Tied for second on the team with nine assists … Her nine assists tie for seventh in program history in a single season while her 29 points also ranks in the top-10 in school history … Tallied a point in a seven game stretch from Sept. 1 through Sept. 26 which included a two assist game against SEMO (Sept. 1) and a four point match against McNeese State (Sept. 8) …  Netted a goal against No. 1 North Carolina (Sept. 15) in the Razorbacks first win over a top-ranked squad in school history … Finished the year with 47 shots, 22 coming on frame, and averaged 2+ shots per game … Put away a goal against North Texas to help Arkansas advance out of the first round of the NCAA Tournament … Turned in the game-winner against No. 15 Vanderbilt on Sept. 26.

Started the first 10 matches of the season before suffering a season-ending injury against Texas A&M (Sept. 20) … Scored two goals and notched four assists for eight points … Scored goals against Florida Atlantic (Sept. 7) and UConn (Sept. 9), both victories … Hit the game-winning goal against FAU, scoring on a one-timer from five yards out in the 75th minute … Her performance against the Owls and the Huskies led to her being named the SEC Offensive Player of the Week and as an honorable mention on Top Drawer Soccer’s Team of the Week … Totaled one assist in four-consecutive matches starting on Aug. 24 against Omaha and ending with her three-point match against FAU … Extended her point streak to five-consecutive matches after scoring her final goal of the season against UConn … Finished the year with 27 shots, 15 coming on goal (.556), the fourth-highest shots on goal total on the team … Played 90+ minutes twice during the season (95 at McNeese St. – Aug. 26; 96 vs. Providence – Sept. 16) … Named to SEC Fall Academic Honor Roll, majoring in Kinesiology: Exercise Science.

Played in 23 matches, starting 21, third-most among Razorback freshmen … Led the team with nine goals and seven assists for a team high 25 points … Also totaled 52 shots with 27 coming on goal (.519), leading all Arkansas players … Also led the team with four game-winning goals and took 37 corners, which were good for second … Her nine goals tied for the most by an Arkansas freshman in the last 17 years … Finished tied for fourth in the league in points, third among freshmen … Also tied for fifth in goals and tied for seventh in the SEC in assists … Scored her first collegiate goal in a 6-1 win over Abilene Christian (Aug. 27), part of a four-goal day … All four goals came in the first 60 minutes of play … She was the first Razorback with a hat trick and a four-goal game since 2001 … Is now one of 12 Razorbacks to score four times in the same match, which is also a program record for goals in a single match … Earned SEC Freshman of the Week honors on Sept. 18 after scoring game-winners against Mississippi State (Sept. 15) and Oral Roberts (Sept. 17), her sixth and seventh goals of the season … The score against Mississippi State, handed the Bulldogs their first loss of the year … Also turned in a game-winner against LSU (Oct. 12) … Picked up points in 10 matches overall, including five matches against conference opponents (MSU, LSU, Kentucky, Vanderbilt, Texas A&M) … Earned the assist on both goals in Arkansas’ 2-0 victory at Kentucky, both from corner kicks … Scored the equalizer in the 81st minute against Texas A&M in the SEC Tournament final, hitting a one-timer at the far post after a throw-in … Earned invitation during offseason to USWNT U-19 Training Camp in San Diego during the month of May.

High School
Four-star recruit according to TopDrawerSoccer.com … Ranked the No. 26 player in the nation according to IMG Academy, as well as the No. 2 South region player and the No. 12 forward … One of three high school athletes selected to participate in the U.S. team camp prior to the 2018 FIFA U-20 World Cup … Missed half of her junior season (2016) due to playing with the U.S. U-18 squad … Traveled to Spain with the U-18 team and delivered the assist on the game-winner against England … Two-time (2015 & 2016) NSCAA All-American and the only Oklahoman selected to the team her sophomore year (2015) … Named the Gatorade Oklahoma Girls Soccer Player of the Year and the Jim Thorpe Female Player of the Year following her junior season … Scored two goals and had one assist in a win over Owasso in the 2016 Oklahoma Class 6A state championship game … Helped lead Union HS to a 19-0 record in 2016, marking its second straight unbeaten season … Played with fellow signee Taylor Malham … Scored 10 goals and added eight assists in 2015 … Three-time Tulsa World All-Metro first team selection … Scored 17 goals a sophomore to lead Union HS to a 17-0 record, Class 6A championship and No. 1 spot in the TopDrawerSoccer.com rankings.