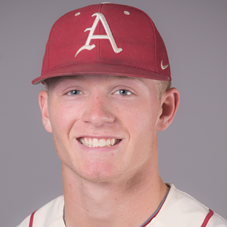 Saw action in 11 games, tossing 8.2 innings on the year … Did not allow a run in five of his 11 appearances … Recorded a season-high three strikeouts against North Dakota (Feb. 14), Loyola Marymount (March 7) and Mississippi Valley State (April 8) … Worked a season-long 2.0 innings in the opening weekend of the year against North Dakota (Feb. 14).

Missed most of his senior season due to injury, but struck out nine and threw five shutout innings in his only appearance … Posted a 3-4 record with a 4.95 ERA in his junior season, striking out 65 batters in 41 innings of work … Also played tennis in high school.

Son of Dick and Crystal Sanburn … Has two brothers, Nolan and Connor … Nolan played for the Razorbacks from 2011-12 and is currently in the Oakland A’s organization … Majoring in kinesiology.