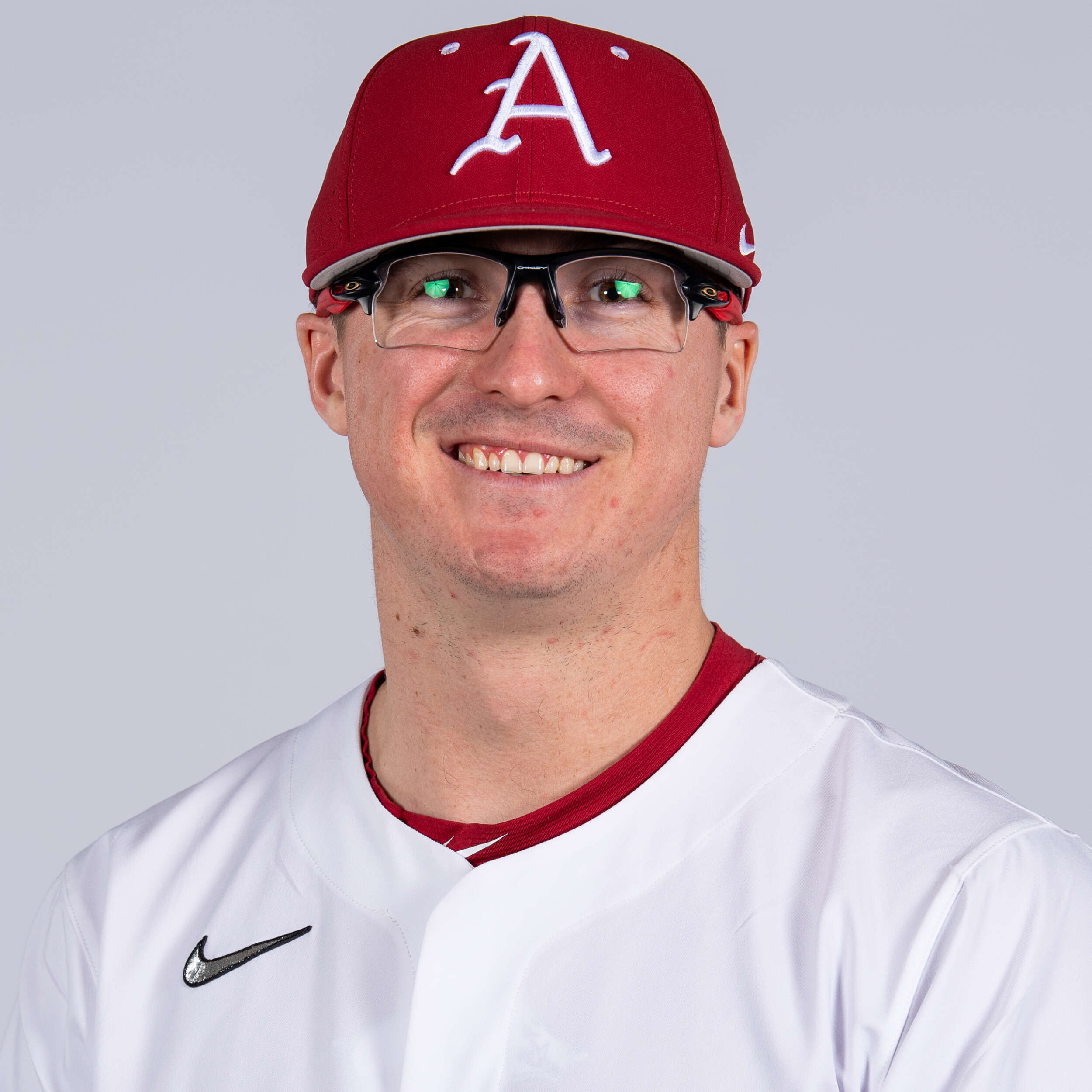 Emerged as the Razorbacks’ Friday night starter … Made 18 appearances with 13 starts … Posted a 7-1 record with a 2.09 ERA in 77.2 innings … Had the second-lowest earned run average among all SEC pitchers during the year … Struck out 85 batters … One of four Arkansas pitchers with 60-plus strikeouts in 2021 … Allowed 22 runs (18 earned) on 65 hits and 24 walks … Limited opposing hitters to a .226 batting average … First appearance of the season came in a relief role against SEMO (Feb. 25), striking out three in four scoreless innings of work … Made his first start of the year against Oklahoma (March 16), striking out one in 1.2 scoreless innings … Came out of the bullpen against No. 22 Alabama (March 19), fanning six over 5.1 innings of one-run ball … Returned to the rotation as a full-time starter at No. 2 Mississippi State (March 26),  limiting the Bulldogs to one run on two hits while striking out three over 5.0 innings … Went a season-long 7.0 innings in the second game of a doubleheader at No. 11 South Carolina (April 23), fanning five and limiting the Gamecocks to one run on two hits … Tossed 6.2 shutout innings at LSU (April 30), punching out five in the process … Nine strikeouts in 5.2 shutout innings against Georgia (May 7) … Fanned a career-high 11 against No. 9 Florida (May 20), limiting the Gators to one run on three hits and earning National Player of the Week honors from Collegiate Baseball Newspaper … Earned a spot on the NCAA Fayetteville Regional All-Tournament Team after striking out seven in five innings of two-hit, one-run ball against No. 19 Nebraska (June 5) … Picked up his seventh win of the season against No. 16 NC State (June 11) in the NCAA Fayetteville Super Regional, allowing one run in 6.0 innings of work … Member of an Arkansas pitching staff that set a school record with 657 strikeouts in 2021.

Sophomore (2020)
Entered the season rated as the No. 64 starting pitcher in D1 Baseball’s Preseason Position Power Rankings … Started four games for the Hogs in 2020 … Finished with a 2-2 record and a 6.32 ERA over 15.2 innings of work … Allowed 13 runs, 11 earned, on 13 hits and nine walks, striking out 17 … One of seven Hogs with double-digit strikeout totals in 2020 … Started game two of Arkansas’ three-game series against Eastern Illinois (Feb. 15) … Earned the win after going 5.0 innings of three-hit, two-walk ball with no runs allowed and seven strikeouts, one shy of a career-high … Sixth start of his career with no runs allowed … Picked up his second win of the season in his second start of the year, tossing 6.0 frames against Gonzaga on Feb. 22 … Allowed just one hit, a hit batter and one walk, matching his season-high strikeout total of seven … Took two starts to hit two wins, needing three to do so last season … Seventh start of his career with no runs allowed … Part of a pitching staff that finished with a 3.68 ERA and 143 strikeouts over 142.0 innings of work.

Made 22 appearances, 15 being starts and generated a 6-2 record with a 4.32 ERA … Pitched 66.2 innings and allowed just 32 earned runs on 50 hits and struck out 90 batters, the second-highest total among the pitching staff … His strikeout total was 15th-most among all pitchers in the SEC and second among all freshman pitchers … Held opponents to a .209 batting average, the second-lowest among Razorback starting pitchers … Made nine appearances in SEC play, six being starts and garnered three wins (at Auburn – April 6; vs. Tennessee – April 27; at Kentucky – May 5) … Pitched 28.0 innings against league opponents and struck out 35, the second-most on the pitching staff … Struck out six or more in four of his six conference starts (at Auburn – April 6; vs. Mississippi State – April 19; vs. Tennessee – April 27; at Kentucky – May 5) … Made two appearances in the NCAA Tournament (vs. TCU – June 2; vs. Ole Miss – June 10) and combined for 6.2 innings, allowing just one run on five hits and two walks, while striking out nine … Made his first collegiate appearance against Eastern Illinois (Feb. 17), working 2.1 innings and allowing just one run on two hits with four strikeouts … Made first collegiate start vs. Memphis (Feb. 27), going 3.0 innings and allowing two earned runs on three hits with four strikeouts … Picked up first collegiate win vs. Charlotte (March 6) after throwing 5.0 scoreless innings with only one hit allowed … Worked 5.0 or more innings six times, his longest outing coming against No. 18 Tennessee (April 27), where he struck out seven and allowed just two runs on four hits … Struck out a season-high eight batters twice in back-to-back outings (vs. Charlotte – March 6; vs. Western Illinois – March 12) … Gave up three hits in five scoreless innings in his first NCAA Tournament start vs. TCU (June 2), striking out seven and walking one … Followed it up the next weekend in the NCAA Super Regional vs. Ole Miss (June 10) with 1.2 innings of work and one run allowed with two strikeouts.

High School
Played for head coach John Diatte at Valley Christian High School … No. 267 player in the nation and No. 30 left-handed pitcher by Perfect Game … Was the No. 5 ranked left-hander in the state of California according to Perfect Game … Compiled a 1.57 ERA as a senior with seven wins in 15 appearances … Struck out a career-high 102 batters during his final high school season and ended up with 350 strikeouts in his career … Threw a no-hitter during his senior season, striking out 18 batters in the process with only one walk in a 7-0 win over San Francisco’s Archbishop Riordan … Compiled a 1.92 ERA as a junior with 94 strikeouts in 80.1 innings and a .192 opponent’s batting average … Helped Valley Christian to the 2017 CCS Open Division Championship … 2017 Collegiate Baseball Preseason Second Team High School All-American … Participated in 2017 Area Code Games for the A’s … Attended 2017 Perfect Game National Showcase.