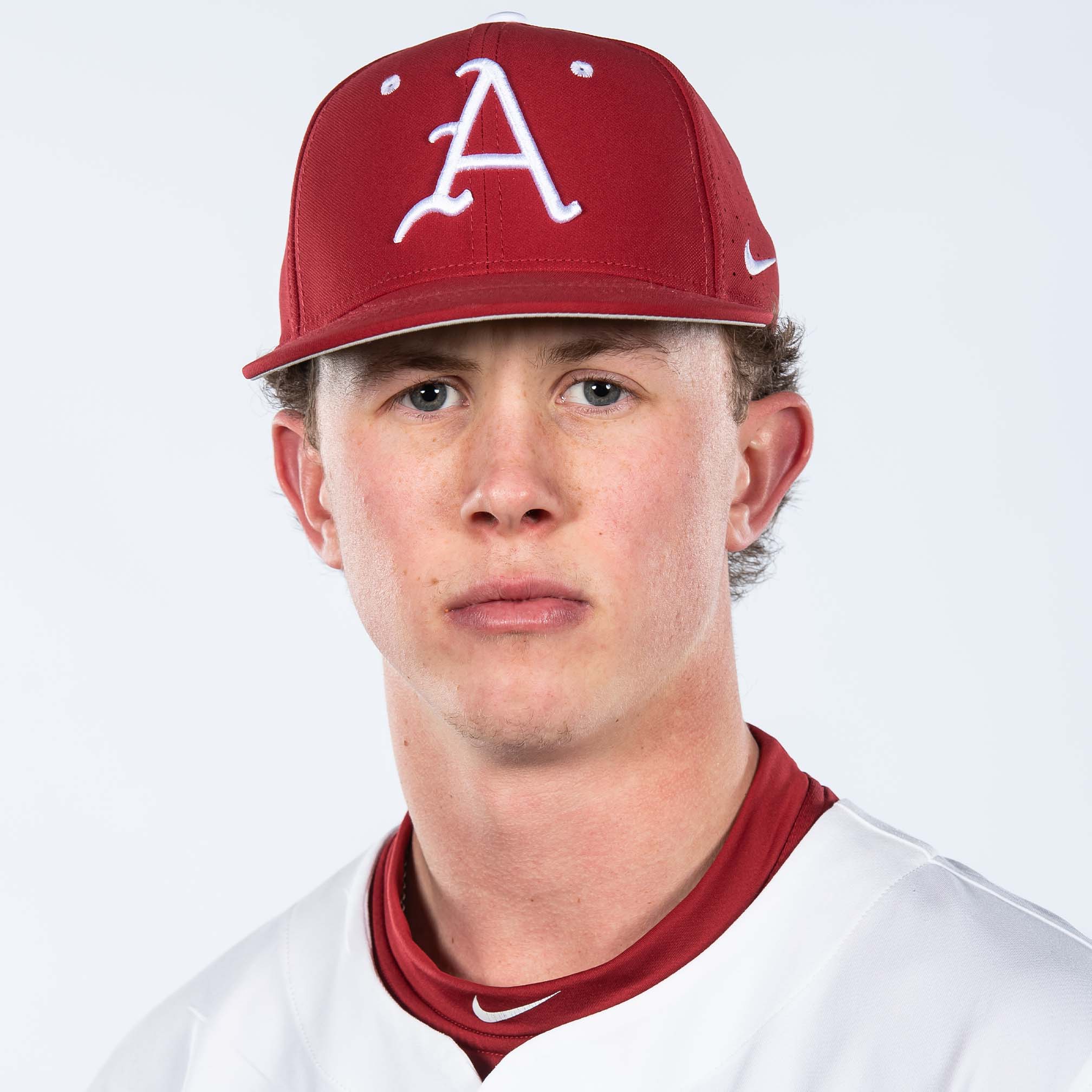 Junior (2022)
Redshirt season … Missed the entire year due to injury … Entered the campaign as a Perfect Game preseason All-American.

Stepped into the starting rotation during his first full season as a Razorback … Made 15 appearances, including 11 starts, logging a 1-2 record with a 4.02 ERA in 56.0 innings of work … Picked up one save, the second of his career … Struck out 67 batters while allowing 27 runs (25 earned) on 51 hits and 20 walks on the year … Limited opposing hitters to a .237 batting average … Struck out five or more batters in eight of his 11 starts … Made his first start of the year against No. 9 Texas (Feb. 21) in the State Farm College Baseball Showdown at Globe Life Field in Arlington, Texas, striking out eight in 4.1 scoreless innings of one-hit ball … Earned his first win of the season against SEMO (Feb. 27), striking out eight over five scoreless innings … Racked up a career-high 10 strikeouts in a start against Murray State (March 5) … Recorded his lone save of the season on the road at No. 2 Mississippi State (March 26), limiting the Bulldogs to one run on two hits while striking out a pair in four innings of relief work … Started against Texas A&M (April 17) in the second game of a doubleheader, fanning seven over six scoreless innings … Eight strikeouts in a start against Georgia (May 8) … Member of an Arkansas pitching staff that set a school record with 657 strikeouts in 2021.

Freshman (2020)
Made four appearances out of the bullpen for the Razorbacks in 2020 … Recorded a 1.59 ERA and one save after pitching 5.2 innings in his freshman season … Allowed three runs, one earned, on five hits and three walks, while striking out three … Retired the first batter he faced twice … Pitched the ninth inning of Saturday’s 10-1 win over Eastern Illinois on Feb. 16 … Allowed one run on two hits, trading the run for a 4-6-3 double play, ending the game on a called-strike three … First collegiate appearance … Pitched the eighth inning against No. 22 Oklahoma in Houston on Feb. 28, facing the minimum … Worked 1.2 innings against South Alabama on March 6, giving up two runs, both unearned, on three hits and a walk, striking out one … First game to pitch more than one inning … Earned the save in the final game of the year vs. Grand Canyon (March 11) after tossing the final two frames of the 2020 season … Walked two in the game and struck out one without allowing a hit, inducing a double play to end the game … Part of a pitching staff that finished with a 3.68 ERA and 143 strikeouts over 142.0 innings of work.

High School
Played for head coach Mark Balisterri at Benton High School and head coach Chase Brewster of the Arkansas Sticks … Ranked as the No. 2 RHP and fifth overall player in the state of Arkansas by Perfect Game … A top 500 player in the nation according to Perfect Game and a member of the Arkansas Sticks travel team … 2019 PG Preseason All-American – Southeast Region Honorable Mention … Played primarily at third base at Benton High school as a junior before transitioning full time to pitching last summer with the Sticks … Helped Benton HS to a runner-up finish in the Arkansas Class 6A state playoffs in 2018 … 2018 All-Conference Honorable Mention … Pitched only 8.2 innings for the Panthers last year, but struck out 15 and walked only five … Has seen his fastball go from the mid-80s to low 90s since focusing on pitching during the summer months.