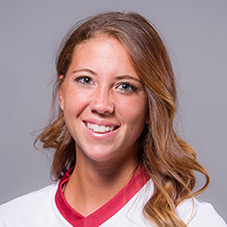 Appeared in 16 games with four starts … Posted 12 shots this season with three on goal … Started back-to-back games against Stephen F. Austin (Aug. 31) and No. 19 Duke (Sept. 5) … Handed out an assist on an Ashleigh Ellenwood goal in her first start of the season against Stephen F. Austin … Assisted on Hailey Pescatore’s game-winning goal against Vanderbilt (Oct. 3) … Posted two shots, one on goal, at Alabama (Oct. 17) and at Mississippi State (Oct. 26).

Freshman (2013)
Appeared in 23 games with eight starts … Tied for fifth on the team in points with 10 (3 goals, 4 assists) … Her three goals placed her in a tie for fifth-most … Finished fourth on the team in assists (4) … Scored the game-winning goal against Utah State (Sept. 13) and recorded her first career multi-goal game against the Aggies … Assisted on the game-winning goal in the 2-1 double overtime win over Nebraska (Sept. 8).

Olympic Development Program
Played for the Texas ODP team from 2007 to 2009.

Club
Played for Solar Chelsea ECNL … Won a state title and appeared in another state final and semifinal in her club career … Led Solar Chelsea to multiple tournament championships between the U11 and U17 levels.

Personal
Born on Aug. 3 … Daughter of Gary and Mellanie Riggs … Majoring in Psychology.