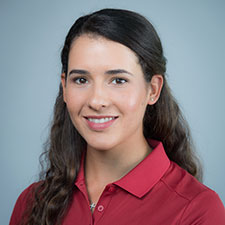 AMATEUR CAREER
Played to a runner-up finish at the Mexican Amateur in January 2015 … Plasencia closed out the summer of 2012 in style reaching the round of eight at the Women’s Trans National in Elgin, S.C. Plasenca finished stroke play tied for fifth overall shooting 147 in two rounds…Qualified for 2015 U.S. Women’s Open … Will take part in the Monday qualifier of the 2016 Walmart NW Arkansas LPGA Championship presented by P&G.

AS A SENIOR
Played in every event since joining the team as a freshman in 2012-13 … Six top-5 career finishes … Was Arkansas’ top finisher in three of the four fall events … One career victory shooting 71 in the stroke play portion of the 2014-15 Liz Murphey Collegiate Classic … Ranks third on the team with a 74.06 stroke average … One of three players in program history from Mexico (Gabriela Lopez, Maria Fassi) … Best SEC Championship finish was tie for 19th in 2014 as a sophomore … Four career NCAA Regional appearances with a best finish of t22 as a sophomore … Eight-time member of the University’s Athletics Department Academic Honor Roll … Ranks 27th in the SEC, 93rd in Golfstat.com and 104th in Golfweek.com

AS A JUNIOR (2014-15)
Finished the fall third on the team with a 71.50 stroke average … Three top 10 finishes in the fall … Tied for fifth overall shooting an eight-under 208 and helping Arkansas to the team title at the Powerade Cougar Classic … Shot a season-best 207 with rounds of 71-66-70 at the Schooner Fall Classic … Tallied eight rounds at par or better in the fall…Finished year with a 74.09 stroke average…Won first collegiate event shooting 71 in the stroke play portion of the Liz Murphey Collegiate Classic…Posted season-best round of 69 four times…SEC Second-Team selection.

AS A SOPHOMORE (2013-14)
Proving the best is yet to come, sophomore Regina Plasencia had a solid four-events kicking off her second season of college golf…A fifth-place finish at the NCAA Preview with a two-under 208 saw her start strong…Plasencia was two-under again at the rain-shortened Mercedes Benz tying for second overall…Rounds of 217 at the Ruth’s Chris Tar Heel Invitational and 215 at the Alamo Invitational rounded out the fall for Plasencia…She moved into the spring with solid finishes in all six events…Plasencia tied for 11th overall at the Liz Murphey Collegiate…She opened with a stroke play one-over 73 and won three matches in match play competition helping Arkansas to a runner-up finish…Plasencia was selected to the SEC All-Second-Team this year.

AS A FRESHMAN (2012-13)
Regina Plasencia joined the Razorbacks and wasted no time jumping into the lineup and competing…Plasencia took part in 11 team events and one individual championship as a freshman and posted two top 10 finishes in her first season of college golf…Plasencia’s best fish was a tie for sixth at the Westbrook Invitational where she shot a 219 with rounds of 74-73-72…Her 219 tied her performance at the Betsy Rawls Longhorn Invitational and ranks as her collegiate career-best round…Her best individual round was a 68 on day two of the season opener at Ole Waverly…Plasencia finished the season with a 75.86 stroke average and was selected to the Southeastern Conference All-Freshman Team in 2013.

PRIOR TO ARKANSAS
Regina Plasencia joins the Razorbacks and adds international flair to the Razorbacks checking in from Guadalajara, Mexico…Plasencia attended Instituto Alpes San Javier in Guadalajara, Mexico, and is a member of the LPGA Futures Tour as an amateur…She took part in the LPGA MasterCard Classic in 2009 and the LPGA Corona Morelia in 2009 and 2010…Plasencia played in the AJGA Polo Golf Junior Classic, the Optimist International Tournament of Champions and the Callaway Junior World Championships in 2010…Some of her more recent events include the Santorini Riviera Nayarit Classic as a special invitee where she shot a 152 (81-17) in April.