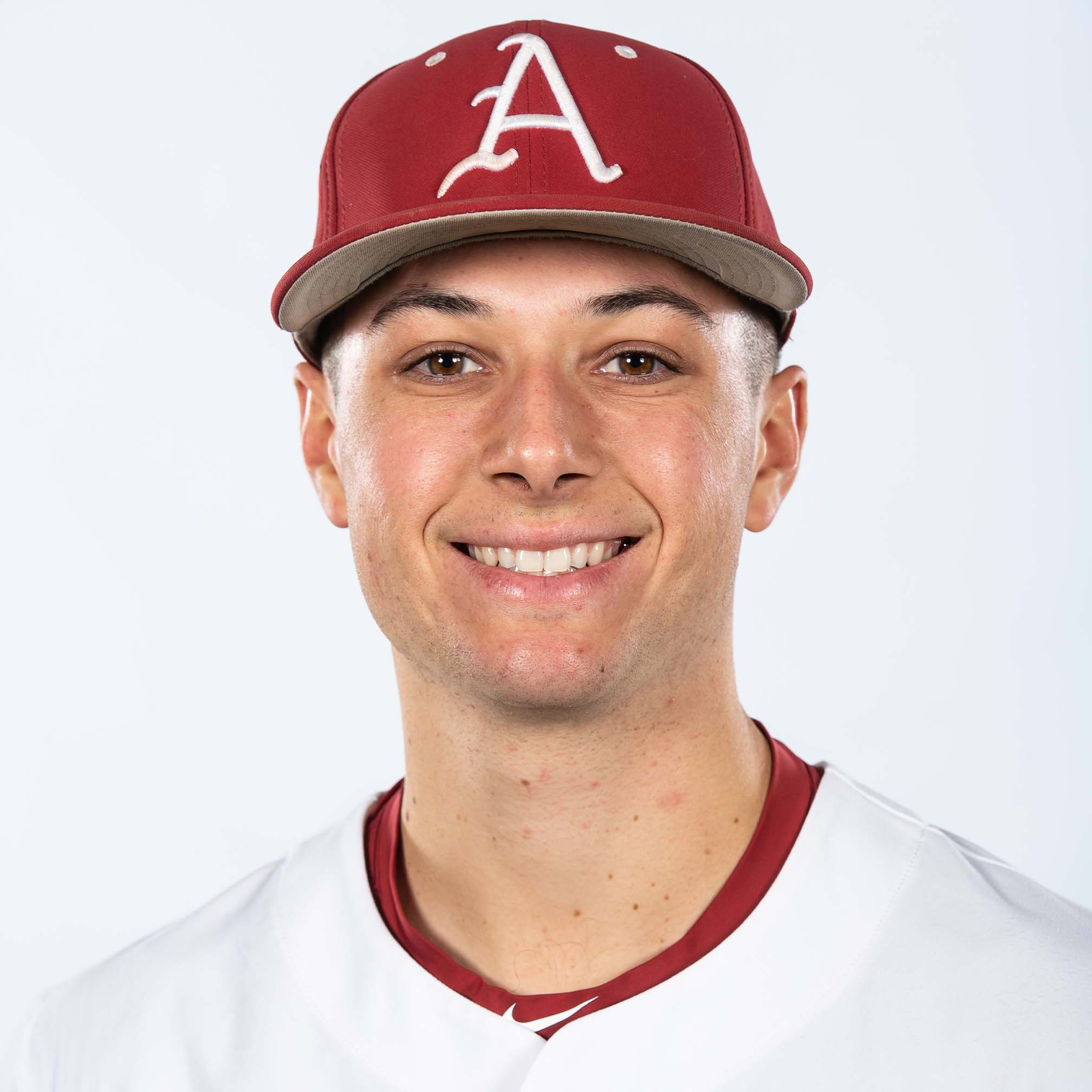 First Razorback in program history to earn Freshman All-America status in multiple seasons … Started and played in 61 games (60 at second base, one at shortstop), slashing .283/.384/.558 with a team-high 16 homers and 53 runs batted in … Led the Razorbacks in runs scored (59) … Racked up 66 base hits on the year, including 10 doubles and three triples … Drew 41 walks, including two IBB, and was hit by two pitches … Totaled a team-best 130 bases … Led the SEC in sacrifice flies (8) … Ranked eighth in the league in runs scored and tied for sixth in home runs … Tied with OF Christian Franklin and INF/OF Brady Slavens for team lead in multi-hit games with 18 … Finished second on the Razorbacks in multi-RBI games with 14 … Had a season-long hitting streak of nine games … Season-long reached base streak of 16 consecutive contests … Swiped six bases in seven attempts … Began the season with a two-hit effort against No. 3 Texas Tech (Feb. 20) in the State Farm College Baseball Showdown at Globe Life Field in Arlington, Texas, collecting an RBI, two walks and two stolen bases … Hit his first home run of the season against SEMO (Feb. 26) … Recorded his first of three two-homer games against Murray State (March 5), racking up three hits, including two homers, and four RBI … Hit for the cycle against UCA (March 30), becoming the first Arkansas batter to accomplish the feat since OF Kyle Harris did so during a game at Tennessee on March 27, 1994 … Drove in a career-high six runs against the Bears, reaching base in all six of his plate appearances … Logged his second multi-home run game of the season at No. 11 South Carolina (April 22), driving in three runs on two homers … Teed off in the first game of a doubleheader at LSU (May 1), collecting four RBI on three hits … Posted a .333/.444/.600 slash line with five hits, including a double and home run, one RBI and two runs scored during the NCAA Fayetteville Regional (June 5-7) to earn a spot on the All-Tournament Team … Delivered his third two-homer performance of the season against No. 16 NC State (June 11) in game one of the NCAA Fayetteville Super Regional, driving in five runs on four hits with five runs scored … Before the season, named a preseason All-American by Baseball America and D1Baseball … Earned preseason All-SEC honors from the league’s coaches … Landed on the Golden Spikes Award preseason watch list … Part of a Razorback offense that hit a school-record 109 home runs in 2021 … Helped Arkansas set a school record in fielding percentage with a .980 mark for the year.

Early enrollee … Started all 16 games as a freshman (15 at second base, one at shortstop) … One of five Hogs to start all 16 games … First Arkansas freshman to earn player of the week honors from the conference … Recorded a .317/.444/.403 line at the plate over 63 at-bats, tallying 20 hits with two doubles and two homers … Totaled 17 RBI with 10 runs scored, eight walks and a hit-by-pitch … 3-for-3 in stolen base attempts … One of three Hogs with 20 or more hits this year … One of six with 10 or more RBI … Finished with the second-most hits by a freshman in the SEC and was third among conference freshmen in batting average and RBI … Went 8-for-12 with a double and a homer in the four-game series against Gonzaga (Feb. 20-23) … Tallied nine RBI, four runs scored, four walks and two stolen bases against the Zags … Had a hit in all four games, including multi-hit performances in each of the last three contests … Earned SEC Co-Player of the Week and Perfect Game National Player of the Week for his effort against Gonzaga, slashing .667/1.000/.750 in the series … Tallied three hits at the Shriners College Classic (Feb. 28-March 1) with three RBI, two runs and two walks … Notched two hits against Illinois State with a run scored (March 3) … Hit .556 with five hits in nine at-bats against Grand Canyon (March 10-11) in the final series of the year … Tallied five singles, three RBIs and scored once … Had multi-hit performances in both games against the Antelopes, earning SEC Co-Freshman of the Week praise for his performance … Part of an offense that finished the pandemic-shortened 2020 season with a .310 batting average, 175 hits and 118 runs scored … Before the season, was rated as the No. 29 second baseman in the country by D1Baseball.

High School
Ranked as No. 1 player in the state of Kansas and No. 20 player in the nation by Perfect Game … Preseason Underclass First Team All-American and competed in the 2019 Perfect Game All-American Classic … Also competed in the 2017 and 2018 Junior National Showcase, as well as the 2019 National Showcase … Played for the 15U USA National Team in the summer of 2018 … Named a 2019 Class 6A Second Team All-State player … Played in first-ever High School All-Star Game during MLB’s All-Star Weekend in Cleveland … Collected two hits in three at-bats in the game, lining a ball to the opposite field and smashing a hard grounder up the middle for an RBI in the seventh inning … Batted .392 as a high school sophomore and voted second-team all-state by the league coaches … A member of USA Baseball’s national development team.