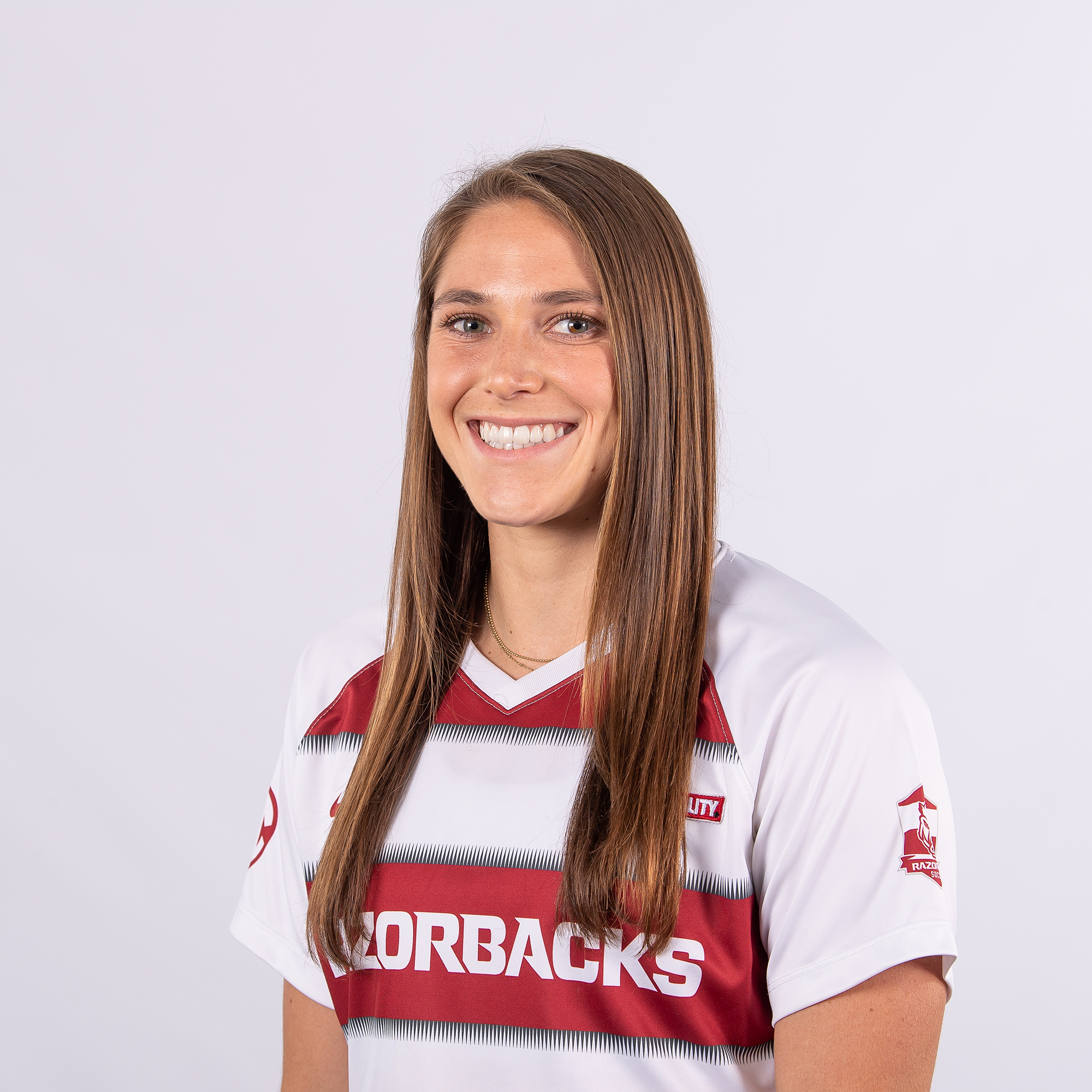 As a Graduate Senior (2021)
Started in all 24 matches, recording 1,898 minutes… Netted 11 goals and 6 assists for a total of 28 points, good for third best on the team… Has the most starts in program history (106)… Tallied three braces on the year, with one at Georgia (Oct. 3) and one in the Sweet 16 match for Notre Dame (Nov. 21)…  Had three game winners, including the Sweet 16 match versus Notre Dame (Nov. 21)… 32 of her 50 shots were on target… Had a season-high of five shots twice, versus Eastern Washington (Sept. 10) and versus Notre Dame (Nov. 21)… Had a season-high 9 shots versus Eastern Washington… Named to the SEC Fall Academic Honor Roll while getting her master’s in operations management.

As a Senior (2020-21)
Got the starting nod in 13 matches… Tallied two goals and five assists for nine points… Had the game-winning goal in the second match of the season at Kentucky (Sept. 27)… Recorded a goal and assist in Arkansas’ SEC Tournament quarterfinal victory over No. 15 Auburn (Nov. 17)… Played 80+ minutes in 12 of the 13 matches, including the full 90 in eight games… Named to the SEC Fall Academic Honor Roll, majoring in Exercise Science.

As a Junior (2019)
Started in all 23 matches for the second-straight season, logging 1,777 minutes … Tied for second on the team with nine assists and was fourth with eights goals … The nine assists are tied for seventh-best in school history for a single season … Her 25 points and 1.43 shots on goal per game was tied for sixth in the SEC … Led the squad with 67 shots, averaging 2.91 shots per game … Picked up a hat trick and dished out an assist in a 7-0 win over McNeese State on Sept. 8 … Had an assist in a four game stretch from Aug. 29 through Sept. 8 in a streak that Arkansas outscored opponents 20-1 … Had the game-winning goal in three matches, including Arkansas’ SEC Tournament quarterfinal match with Ole Miss, playing the full 90 minutes … Played 90+ minutes in six different matches with a season-high 103 minutes in the Razorbacks regular season finale against Georgia on Oct. 27 … Logged 70+ minutes in both of the Razorbacks matches in the NCAA Tournament against North Texas and NC State.

As a Sophomore (2018)
Played in and started all 23 matches, upping her career games played total to 47 matches … Logged 1,787 minutes, the second most on the team … Also scored six goals and notched a team-best nine assists for 21 points … The six goals match her total from her freshman season and were second-most on the team … The 21 points were the eighth-most in the SEC and the nine assists tied for the most in the league … The assist total also tied for the sixth-most in a single season in school history … Also notched 75 shots, 33 on target for a .440 shot on goal percentage, the second-highest percentage among Razorback layers with 40 or more shots … Finished with top-three totals on the team in points (21), shots (75), goals (6), shots on goal (33) and assists (9) … Two of six goals came in SEC play (Missouri – Sept. 27; Auburn – Oct. 21) … Also scored three times in postseason play, twice in the SEC Tournament (vs. Ole Miss – Oct. 30; vs. LSU – Nov. 4) … Recorded at least one point in 14 of 23 matches … In those matches, Arkansas went 11-1-2 … Combined for five points in two of final three matches after setting a career-high three points in the Razorbacks’ 5-1 win over Little Rock in the NCAA Tournament First Round … Scored the game-winner in Arkansas’ 1-0 victory over Missouri (Sept. 27), for the Razorbacks’ third-consecutive SEC win … Provided an assist in Arkansas’ second goal of a 3-2 victory over No. 2 Texas A&M, the first win over the Aggies since 1993 and first over a top-two team since 2016 … Played 90 or more minutes six times, including five matches of 100 or more minutes … Played a career-high 110 minutes in the SEC Tournament final against LSU (Nov. 4) … Started both of Arkansas’ two NCAA Tournament matches, logging 45 minutes against Little Rock (Nov. 9) and 103 minutes against Virginia Tech (Nov. 16) … Scored one of Arkansas’ five  first-half goals in the first round win over the Trojans, her sixth goal of the year, while also logging an assist.

Started all 24 matches, most of any freshman on the team … Logged 1,881 minutes, while scoring six goals and tallying two assists for 14 points … The six goals were good for second most on the team and the 14 points were third-best on the squad … Also notched 48 shots, 21 on target for a .438 shot-on-goal percentage, third-highest among Razorbacks with 20 or more shots during the season … Made her first collegiate start in the season opener at SMU (Aug. 18) and scored her first collegiate goal at North Texas (Aug. 20) … Scored four times during non-conference play, finding the net at North Texas, against top-ranked Penn State (Aug. 25), James Madison (Sept. 1), and Mississippi Valley State (Sept. 3) … Also scored goals in the regular-season finale against No. 19 Tennessee (Oct. 26) and in SEC Tournament-opener against Ole Miss (Oct. 29) … Goal against Rebels occurred in 32nd minute off a set piece and was the game-winner to send Razorbacks to the SEC Tournament quarterfinals … Scored two other game-winners against North Texas and James Madison … Had second-most game-winning goals on the team … Notched assists in 2-0 victory over Auburn (Oct. 5) and in 1-0 victory over top-seeded South Carolina (Oct. 31) to send Arkansas to the SEC Tournament semifinals … Was named to the SEC All-Tournament Team, one of three true freshmen to make the team … Played 90 or more minutes nine times throughout the year including in six-straight matches to end the year … Played a season-high 107 minutes in the SEC Tournament semifinals against Vanderbilt … Selected to US Women’s National U-18 Team for a two-match tour in Switzerland in April … Scored the game-winner in a 1-0 victory over the Switzerland U-19 team in their second match … Also was invited with teammate Parker Goins for USWNT U-19 training camp in San Diego in May.

Club
One of just 24 players selected to participate in the U.S. Under-17 National Team camp in December 2015 … Participated in the Nike National Camp, U.S. National Camp, U.S. Soccer Player Development Program and id2 National Identification and Development Program … Won Texas Conference in 2016 with TSC Hurricane, leading the club team in goals and assists … Finished fourth in the conference in scoring and second in assists … Played with fellow signees Parker Goins, Nayeli Perez and Haley Vanfossen.

High School
Rated a three-star recruit according to TopDrawerSoccer.com … Ranked the No. 88 player in the nation by IMG Academy as well as the No. 35 midfielder …  Helped lead Union High School to back-to-back Oklahoma Class 6A state titles and the No. 1 spot in the TopDrawerSoccer.com national ranking as a sophomore (2015) and junior (2016) with a combined record of 36-0 … Four-year starter in soccer at Union High School … Two-time TopDrawerSoccer.com national champions (2015, 16) … 2016 NSCAA national champions, 2016 NSCAA All-Region … 2016 Gatorade Player of the Year runner-up … Led Union HS with 49 points on 15 goals and 19 assists as a junior in 2016 and earned Team MVP honors … Scored the insurance goal to help Union HS seal its second-straight Class 6A state title (2016) … Earned a spot on the Tulsa World All-Metro first team in 2016 … Named to the Tulsa Area All-VYPE team and Tulsa World All-Metro honorable mention following her sophomore season in which she scored 11 goals … Four-year starter for Union High School in basketball, averaged 17.2 points, 6.2 rebounds and 4.1 steals per game.