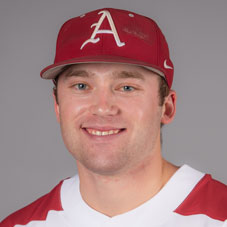 In his first season as a Razorback, played in and started all 66 games at either first base or second base … Hit .329, good for second on the team, while also leading the squad with 25 doubles and second in hits (84) … His 72 runs scored led all Razorbacks and was good for 4th most in the SEC and 11th in the country … The 72 runs scored tied with Dave Patterson (1986) for sixth-most in a season by a Razorback … Also had 49 RBIs and 47 walks … His home runs (10) and doubles were career highs and he finished his career with 247 games played, which ranked fifth-most among recent active players in the 2019 season … Finished with 335 career hits over his five years in Division I Baseball, ranking fourth among recent active players … His 25 doubles were the sixth-most in a season in Razorback history, three shy of the record (28 by Jim Kremers – 1987) and most in the SEC, fourth-most in the nation … Led the team with 19 stolen bases, his second most in a season in his career, and finished ninth in the league … It was most stolen bases in a season by a Razorback since Andrew Benintendi stole 24 in the 2015 season … Only made three errors in 521 chances at first base, leading to his SEC All-Defensive Team selection … Hit .256 in conference play with 14 doubles, five home runs and 24 RBIs … Stole six bases in conference play and led the team with 22 walks in his 30 SEC games … Was Arkansas’ top hitter in the 2019 NCAA Tournament, hitting .459 over eight games, compiling 17 hits, six being doubles, two home runs and eight RBIs … Also slugged .784 in the NCAA Tournament, the only Razorback to slug .700 or higher in the tournament, tying for the highest of any player that reached the College World Series … Tied a school record with six runs scored in a 3-for-3 day against Grambling St. (April 30), a record last set by Jeremy Jackson and Todd Zacher in 1997 and 1981, respectively … Went 3-for-4 on Opening Day, his first game as a Razorback, with three RBIs, two doubles, a home run and a walk vs. Eastern Illinois (Feb. 16) … Ended the year on a nine-game hitting streak (May 24-June 17), his second-longest of the season and including four games of three hits or more … Went 8-for-14 (.571) in the NCAA Fayetteville Regional, including a four-hit, three double game against TCU (June 2) … Also went 7-for-14 (.500) in the NCAA Super Regional against Ole Miss, tallying three-hit games in Games 1 and 3, while driving in four runs and hitting three doubles.

Returned from injury to start in 56 games and lead the team with a .377 batting average and a .442 on-base percentage … Finished first on the team in runs scored (52), hits (87), triples (4) and stolen bases (11) … Hit .409 in OVC play, starting all 30 games and recording over half of his season hits (54) … Drove in 26 of his 50 RBIs in conference play and stole six of his 11 bases against league opponents … Finished the year with 24 multi-hit games and 14 multi-RBI games … Notched 13 multi-hit games with three hits or more … Had a team-best 42-game reached base streak that lasted from March 9 vs. Morehead State to May 24 vs. Morehead State in the OVC Tournament … Only went hitless seven times during that streak … Also opened the year on a season-best 12-game hitting streak, lasting from Feb. 16 at Charleston to March 4 vs. South Dakota State … Tallied a season-high four hits in three games (vs. South Dakota State – March 4; vs. Morehead St. – March 10; at Tennessee Tech – April 29) … Went 10-for-14 (.714) at the plate in the Tennessee Tech series earning three or more hits in all three games and six total RBIs …

As a Junior at SE Missouri St.(2017)
Started seven games at second base before a back injury ended his season Was later granted a medical redshirt…Collected eight hits, six runs scored, a double, one triple, one home run and five RBIs prior to his injury…Added three stolen bases…Had a triple, four RBIs and three runs scored vs. Western Illinois (2/24)…Also posted two hits vs. UT Arlington (2/17) and Western Illinois (2/26)…Ohio Valley Conference Medal of Honor recipient and OVC Commissioner’s Honor Roll selection…Southeast Scholar-Athlete.

Started 59 games…Registered a team-high 23 stolen bases in 25 attempts…Was third on the team in hits (79) and second in on-base percentage (.458)…Went 3-for-3 on steal attempts while tying for a team-best eight runs scored during the OVC Tournament… One of three Redhawks to sport at perfect fielding percentage during the OVC Tournament…Broke the school’s single-season runs record with 70…Set the new mark in the championship game of the OVC Tournament when he scored three times His 246 at-bats set a new Southeast single-season record… Led the team with 25 multiple-hit games…Had six multi-RBI performances…Strung together an 18-game hitting streak and reached base in 28-straight contests…Ranked nationally in walks (14th, 53), runs (fourth, 70), and runs per game (third, 1.19)… His 53 walks tied for fourth on the school’s single-season list… Earned CoSIDA Academic All-American status as a third-team infielder with a 3.92 GPA…Named Louisville Slugger Preseason All-American by Baseball America…2016 CoSIDA Academic All-District pick…Second Team All-OVC honoree…Earned NCAA Starkville Regional All-Tournament Team honors…Recipient of the OVC Medal of Honor…Member of the OVC Commissioner’s Honor Roll… Southeast Scholar-Athlete.

As a Freshman at SE Missouri St. (2015)
Had a breakout season as a true freshman…Earned NCBWA Freshman All America status… Named OVC All-Freshman Team… Ranked ninth nationally in runs per game (1.12), 12th in runs (66), 18th in triples (6) and 43rd in walks (41)…Started all 59 games…Made 17 starts in left field before starting eight games at second base… Started 33 contests at third base…Served as the team’s leadoff hitter in 52 games…Tied a team-high 77 hits…Recorded 21 multi-hit games and 11 multi-RBI performances…Had three or more hits in eight games…Stole 11 bases…Had four hits in seven at-bats and drove in four runs at Murray State (4/25)…Member of the OVC Commissioner’s Honor Roll…Southeast Scholar Athlete.

Bryant High School
Graduated from Bryant High School…Started and lettered two of his prep seasons…Hit .516 with 49 hits, 11 doubles and 31 RBIs as a junior…Earned Second Team Louisville Slugger All-America and All-State honors…Helped lead his team to a state title in 2012 and two conference championships (2012, 2013)…Recorded a 4.13 GPA.