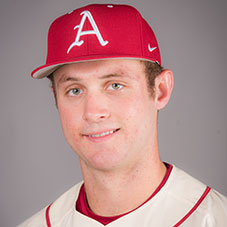 2016 (Senior)
Primary catcher for 2016 season, playing in 46 games, starting 40…Batted .265 with 36 hits, 10 of which were doubles, two home runs and 12 RBI…All offensive totals were personal season-highs as a Razorback…Also walked 12 times and stole two bases…Only made six errors behind the plate for a .984 fielding percentage…Caught 27 base stealers, which led the Southeastern Conference all season…The caught stolen base total ties Brady Toops for the most by a Razorback catcher since 2004…Was placed on the Johnny Bench Award Watch List midway through season, recognizing him as one of the nation’s top catchers…Recorded seven multi-hit games, three being of three hits or more…Went 3-for-4 against Texas Tech (2/28) at Houston Shriners College Classic, including two doubles…Also went 3-for-4 against Alabama (5/14) with two runs scored…Went a perfect 4-for-4 against LSU (5/7), tying a career-high in hits, while scoring twice and getting one walk…Was one of two Hog players (Rick Nomura) to have a four-hit game during the 2016 season…Set new personal season-high in slugging (.382) after hitting first two Division I home runs vs. Western Illinois (3/11) and South Carolina (3/18) along with double-digit RBIs…Finished career with .238 batting average over two seasons with 55 hits over 90 games played…Was signed by the San Diego Padres as a free agent during the summer of 2016.

2015 (Junior)
Started 44 games behind the plate during the 2015 season, hitting .200 with three doubles and seven runs batted in … Recorded his only two-hit performance in the NCAA Fayetteville Super Regional, going 2-for-4 with one RBI and two runs scored … Hit safely in seven of the last 10 games to raise his batting average 41 points … Recorded a hit in the SEC Tournament, NCAA Stillwater Regional, NCAA Fayetteville Super Regional and College World Series … Threw out 20 of 56 base stealers for a .643 stolen base allowed percentage … Posted a .983 fielding percentage at catcher.

Temple Junior College (TX)
Played with the Brazos Valley Bombers of the Texas Collegiate League during the summer of 2014 … Won the TCL Championship and batted .256 with 17 RBI in 34 games.

Personal
Son of Bill and Marla Pennell … Has two siblings, Reese and Raegan … Majoring in Marketing.