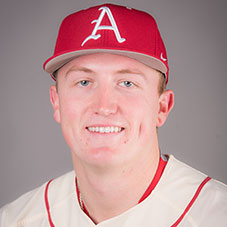 Made 18 appearances on the mound during the 2016 season, both as a starter and a reliever…Posted a 3-4 record with a 5.09 ERA, four saves and 66 strikeouts…The strikeout total was his second-most in a season in his three-year career…Named to three preseason all-american first teams (Louisville Slugger, Perfect Game, NCBWA) and was also a Preseason All-SEC first-teamer…Gave up a combined three hits and one run over his first five appearances of the season, all as a relief pitcher over a stretch of seven innings…Earned first save of the year against Central Michigan (2/20), going the final 1 1/3 innings with four strikeouts and just one run given up…Made a string of five-straight starts in the middle of the conference season, going as much as seven innings against No. 12 Kentucky (4/23/16), which was a complete game and a career-high innings pitched…Gave up just two hits and struck out eight, tying a career-high, against the Wildcats…Was one of just two pitchers to throw a complete game during the season…Tallied three or more strikeouts in each of his last eight appearances…Career-high eight strikeouts came against Ole Miss (4/9) and Kentucky; both starts…His 68 career appearances currently ties for ninth all-time in program history and his 15 saves is second all-time.

Made 27 appearances on the mound during the 2015 season, posting a 5-1 record with nine saves and a 2.10 earned run average … Named First Team All-SEC (Coaches) as a relief pitcher … Recorded 89 strikeouts in 60.0 innings of work and tallied a strikeout in 26 of his 27 appearances on the year … Made three starts and 24 relief appearances and never allowed more than two earned runs in a single outing … Allowed just two earned runs over his final 12 outings and 20.2 innings of the year … Named to the Stillwater Regional All-Tournament Team after appearing in all three games, picking up two saves and allowing just one hit, while striking out 10 of the 12 outs he recorded … Sent Arkansas to the College World Series with 3.2 innings of one-hit ball in the decisive Super Regional game against Missouri State, setting down 11 consecutive batters and adding six strikeouts … Recorded a season-high eight strikeouts in his first appearance of the year against North Dakota (Feb. 14) … Lasted a season-long 5.1 innings and allowed just one hit with five strikeouts against Loyola Marymount (March 6) … Selected to play for the USA Collegiate National Team following the season.

Became a premier reliever for the Razorbacks with 24 appearances, posting a 2.53 earned run average in 42.2 innings of work … Recorded 42 strikeouts, the most of any reliever on the team, and held opponents to a .184 batting average … Was one of five pitchers in the SEC to throw at least 3.0 innings without allowing one hit during the opening weekend … Recorded multiple strikeouts in each of his first five relief appearances … Allowed just one earned run in his final 13 appearances from the bullpen … Earned one of his two saves on the year in the opening round of the SEC Tournament, tossing 3.0 scoreless innings against Texas A&M (May 20) with four strikeouts to give the Razorbacks a 4-0 victory.

Named a second team All-American by Baseball America after compiling a 13-1 record with a 0.38 ERA and striking out 147 in 72.2 innings as a senior … Selected to the USA Today All-Oklahoma Team and The Oklahoman’s first team All-State … Named the Pitcher of the Year by the Tulsa Metro Baseball Coaches Association … Helped his team to a state championship as a senior … Earned first team All-Metro honors from the Tulsa World as a junior and was Tulsa World All-Metro honorable mention as a sophomore and freshman … Finished his high school career with a 39-3 record, a 1.08 ERA and struck out 437 batters … Also played football in high school and was named All-Conference Offensive Player of the Year as a senior … Finished his high school career with a 4.0 GPA and was valedictorian of his class.

Son of Kevin and Gina Jackson … Has one sister, Chelsea … Pursuing a degree in pre-business.