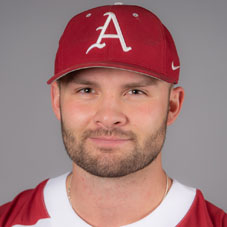 TCU (2015-16)
Made 19 starts in 39 games for the Horned Frogs … Totaled 12 hits with 10 runs scored and eight RBIs over the two seasons … Held a .167 batting average combined for the two seasons … Of his 39 appearances, 35 were either as a starter at catcher or as a defensive replacement behind the plate … Posted three multi-hit games and two multi-RBI games in 2015 … First career start for TCU came on Feb. 14, 2015, against Southern Illinois … As a sophomore, registered a hit in five games and reached base safely in nine.

L.D. Bell High School
Earned a pair of letters at L.D. Bell High School… Named district defensive MVP honors as a senior… Tabbed an all-area performer as as senior… Earned honorable mention all-district honors as a junior… Selected to the Star-Telegram Baseball Super Team following his senior season… Recognized as one of the top 500 high school players in the country by Perfect Game… Was selected to participate in the Perfect Game National Showcase at the Metrodome in Minneapolis, Minn.

Personal
Son of Jill and Terry Plunkett … Has one brother, Grant.