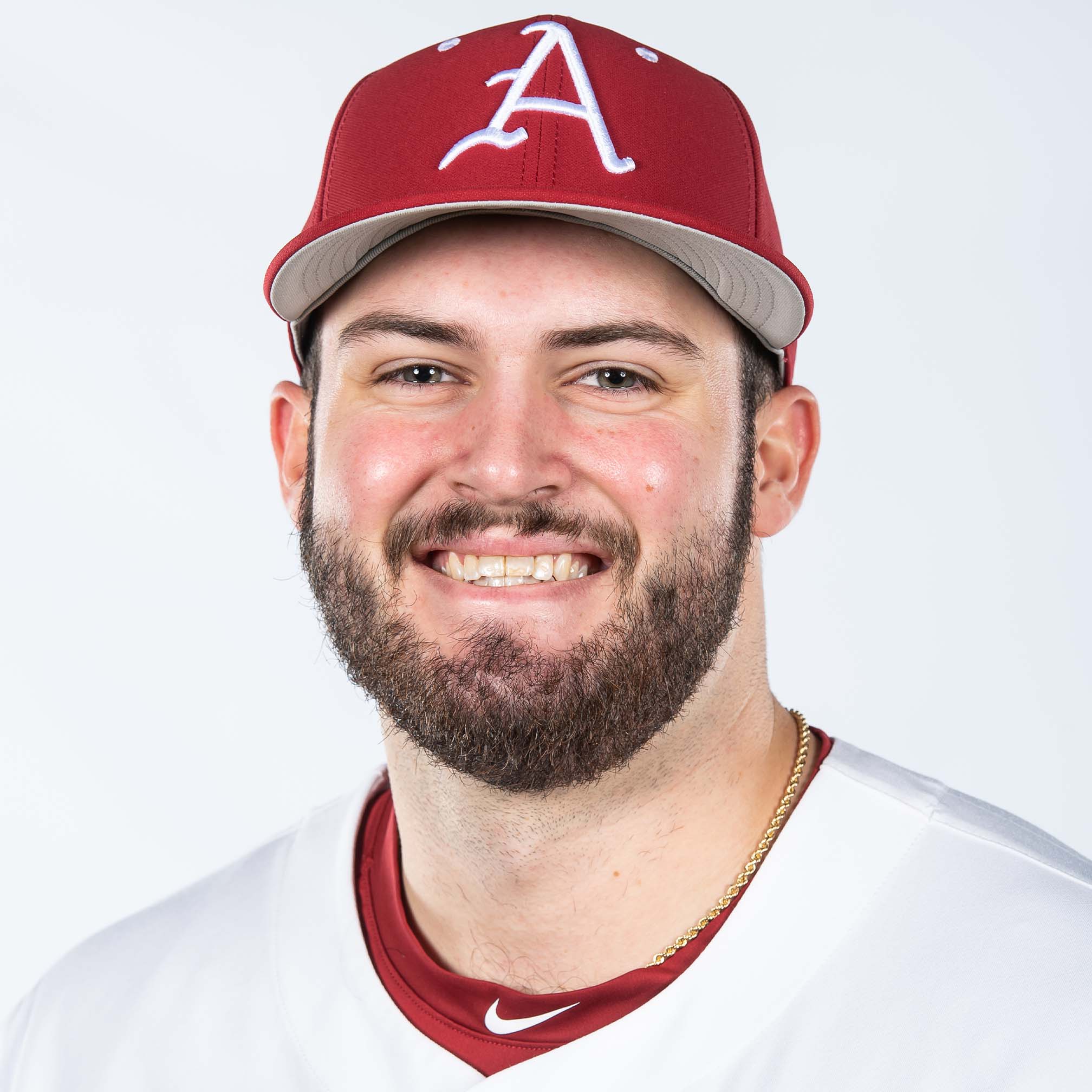 Redshirt Senior (2022)
Made 24 relief appearances on the mound … Went 2-0 with a 2.39 ERA and two saves in 26.1 innings … Struck out 28 on the year … Limited opposing hitters to a .220 batting average … Allowed seven runs on 22 hits and 10 walks … In SEC play, posted a 1-0 record with a 3.77 ERA and two saves in 14.1 innings over 12 games … Began the season with six consecutive scoreless outings, including a season-long three shutout innings against Kentucky (March 19) … Fanned a season-high five and earned his first save of the season in the outing against the Wildcats … Picked up his second save of the year at Florida (April 7), striking out two across two innings of work … Tallied three strikeouts in 2.1 innings at No. 19 Auburn (May 7) … In the NCAA Tournament, made four appearances and did not allow a run over 3.1 innings of work … Threw a scoreless inning with one strikeout vs. No. 2 Stanford (June 18) in the College World Series … Also tossed a shutout inning vs. No. 25 Auburn (June 21) … Member of an Arkansas pitching staff that set a new school record with 674 strikeouts in 2022.

Appeared in 15 games, making six starts … Posted an unblemished 3-0 record with a 4.69 ERA in 40.1 innings of work … Logged one save, the third of his career … Totaled 28 strikeouts on the year … Allowed 21 runs on 41 hits and 15 walks … Made his first career start in the season opener against No. 3 Texas Tech (Feb. 20) in the State Farm College Baseball Showdown at Globe Life Field in Arlington, Texas, striking out four over four innings of two-run ball … Earned his lone save of the season against Murray State (March 6), emerging from the bullpen to throw 2.1 scoreless innings … Went a career-long 8.0 innings in back-to-back starts at Louisiana Tech (March 13) and against No. 22 Alabama (March 20) … Limited Louisiana Tech to one run on three hit while striking out a pair … Held Alabama to one run on one hit while matching his season high in strikeouts with four … Came out of the bullpen in the first game of a doubleheader at No. 3 Ole Miss (April 10), fanning four in 1.2 innings of work … Tossed a scoreless frame with two strikeouts against No. 9 Florida (May 22) … Member of an Arkansas pitching staff that set a school record with 657 strikeouts in 2021 … Before the season, earned a spot on the NCBWA Stopper of the Year preseason watch list.

Junior (2020)
Entered the season rated as the No. 26 relief pitcher in D1 Baseball’s Preseason Position Power Rankings … Pitched five times in relief for the Razorbacks in 2020 … Posted a 1-0 record and earned one save … Was not charged with a run over 7.1 innings of work … Only Razorback pitcher with a 0.00 ERA in 2020 … Allowed just four hits, all singles, while striking out 12 … One of seven Hogs with double-digit strikeout totals … Retired the first batter he faced in three outings … Made his first appearance against Gonzaga on Feb. 20, pitching the ninth inning … Picked up his third career save after a shutout frame, allowing just two hits … Sixteenth scoreless outing … Finished off the series with a a clean ninth against the Zags on Feb. 23 … Struck out one and faced the minimum to cap off the four-game sweep … Tossed another scoreless inning against Baylor on March 1 … Struck out two of the three batters he faced … Worked 1.1 frames against Illinois State on March 3, giving up one hit that brought in two runs … Struck out three batters for a season-high mark … Earned the win after tossing the final three innings against South Alabama on Sunday, March 8 … Allowed just one hit to the first batter he faced, then retired the next nine, totaling six strikeouts in the process … It was a career-high strikeout figure and the third time in his career he’s pitched 3.0 innings … Part of a pitching staff that finished with a 3.68 ERA and 143 strikeouts over 142.0 innings of work.

Sophomore (2019)
Made a career-high 20 appearances, all in relief, with seven coming in league play … Built up a 3.63 ERA and a 4-1 record, one of five Razorbacks with four or more wins during the year … Threw 22.1 innings and allowed just nine earned runs with 21 strikeouts … Earned his first career win against Memphis (Feb. 17), throwing 2.0 scoreless innings and allowing just one hit with one strikeout … Also earned wins against Stony Brook (March 2), at Missouri State (March 26) and at Vanderbilt (April 14) … Earned one save, his second of his career, coming at No. 15 Auburn (April 6), throwing the final three innings with just two hits allowed and striking out three, matching a season-high … Allowed only one run in his first nine appearances, going 11.2 innings with only three walks and 11 combined strikeouts … Gave up two or less hits in 18 of his 20 appearances.

Freshman (2018)
Made seven appearances, three in conference play … Had a 4.82 ERA over 9.1 innings with five earned runs allowed and 11 strikeouts … Also earned one save coming against Dayton (Feb. 28), one of six Razorbacks to earn a save during the season … Made his first collegiate appearance against Bucknell (Feb. 17), throwing one inning and striking out one … In his save against Dayton, threw a season-high three innings, allowing only one unearned run and three strikeouts … Tallied a season-high four strikeouts in 2.1 innings against Florida with only one earned run allowed on three hits.