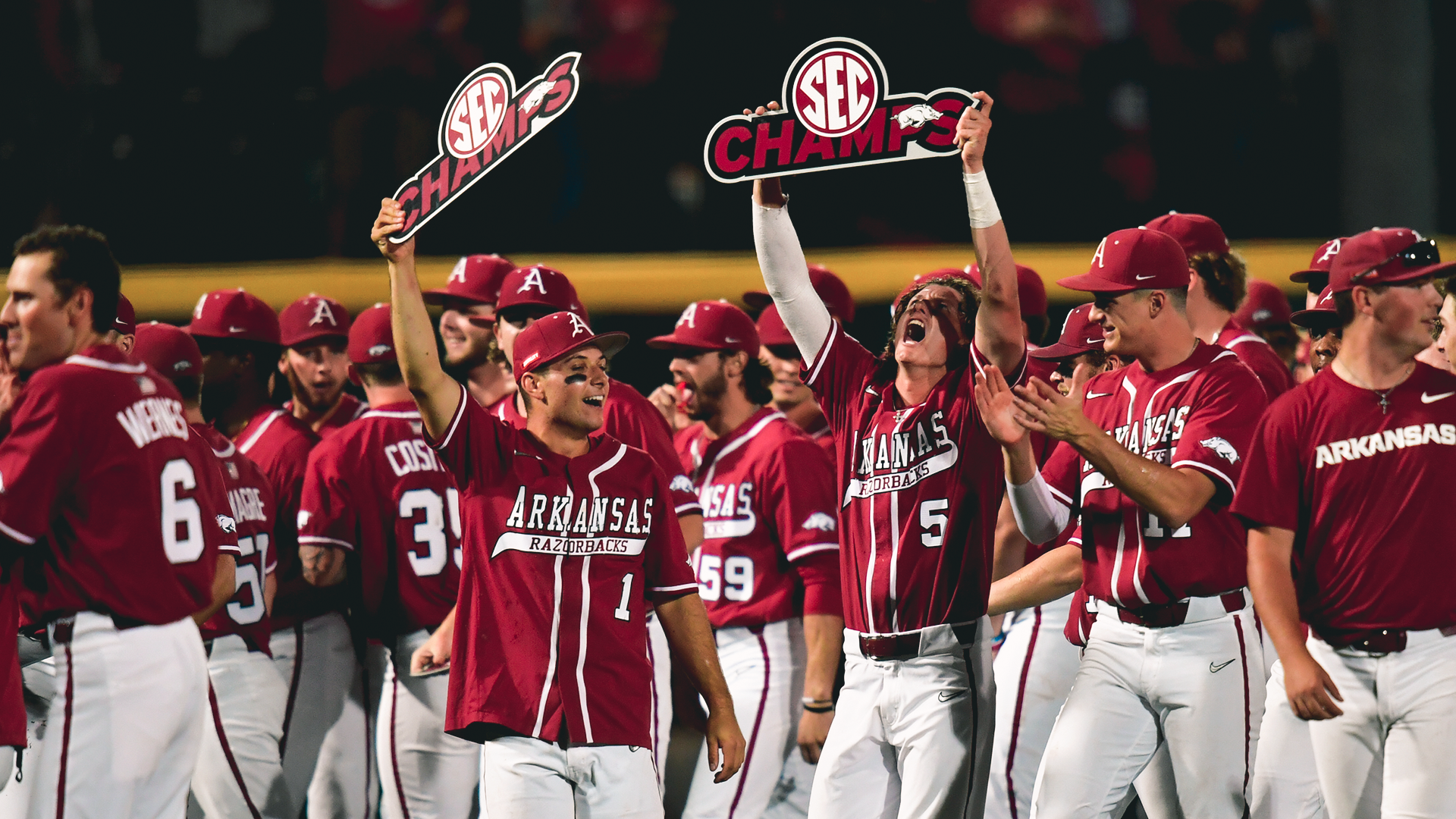 FAYETTEVILLE, Ark. – The Arkansas Razorbacks are the outright SEC champions.

Charlie Welch’s walk-off RBI double in the come-from-behind 4-3 win against No. 9 Florida on Friday night at Baum Walker Stadium will live in the memory of Hog fans for the rest of time. The Razorback pinch hitter drove home Casey Opitz from third to clinch Arkansas’ first regular-season SEC championship since 2004 and the Razorbacks’ first outright overall title since 1999.

Arkansas, the nation’s unanimous top-ranked team, also clinched its 10th SEC series win of the year. The Hogs (41-10, 21-8 SEC) and the 2013 Vanderbilt Commodores are now the only two SEC teams in history to win all their conference series in a season.

The Razorbacks won in a familiar fashion Friday night, rallying from an early multi-run deficit before handing the ball over to the nation’s most dominant pitcher. Trailing by three runs in the bottom of the second inning, Arkansas’ first spark came off the bat of Christian Franklin.

His 12th homer of the year cut the Hogs’ deficit to two before Jalen Battles made it a one-run game with his RBI sacrifice fly to left. Arkansas starter Caleb Bolden, meanwhile, settled down after allowing three runs over the first two frames.

The right-hander struck out seven in his four innings of work, turning the ballgame over to the bullpen with the Razorbacks trailing by one. Peyton Pallette (1.0 IP), Caden Monke (3.0 IP, 7 K) and Kevin Kopps (1.0 IP, 3 K) combined for 10 strikeouts in five scoreless innings of relief work.

The trio’s dominance out of the pen kept the deficit steady and allowed Arkansas to tie the game at three in the bottom of the eighth. Robert Moore’s two-strike solo homer to right field with two outs in the inning electrified all 11,084 fans inside Baum-Walker Stadium as momentum quickly swung in the Razorbacks’ favor.

Kopps came on and struck out the side on 12 pitches in the top of the ninth, setting the stage for the Hogs’ dramatic walk-off winner in the bottom half of the inning. After Opitz doubled to left center and advanced to third base on an error, Welch stepped up to the plate as a pinch hitter with one out in a 3-3 game.

Welch ripped a liner over the right fielder’s head in right center, scoring Opitz and clinching Arkansas’ first outright regular-season SEC crown since 1999. The Razorbacks swarmed Welch in the outfield, celebrating the win in front of the Arkansas faithful.

Kopps’ perfect inning lowered his nation-best ERA to 0.75 in 60.1 innings pitched this season. The reliever has struck out 97 batters on the year and owns an unblemished 10-0 record out of the bullpen.

The Hogs will throw right-hander Jaxon Wiggins in tomorrow’s finale against the Gators, eyeing a series sweep to close out the 2021 regular season. First pitch is at 2 p.m. on SEC Network+ and the SEC Network Alternate.