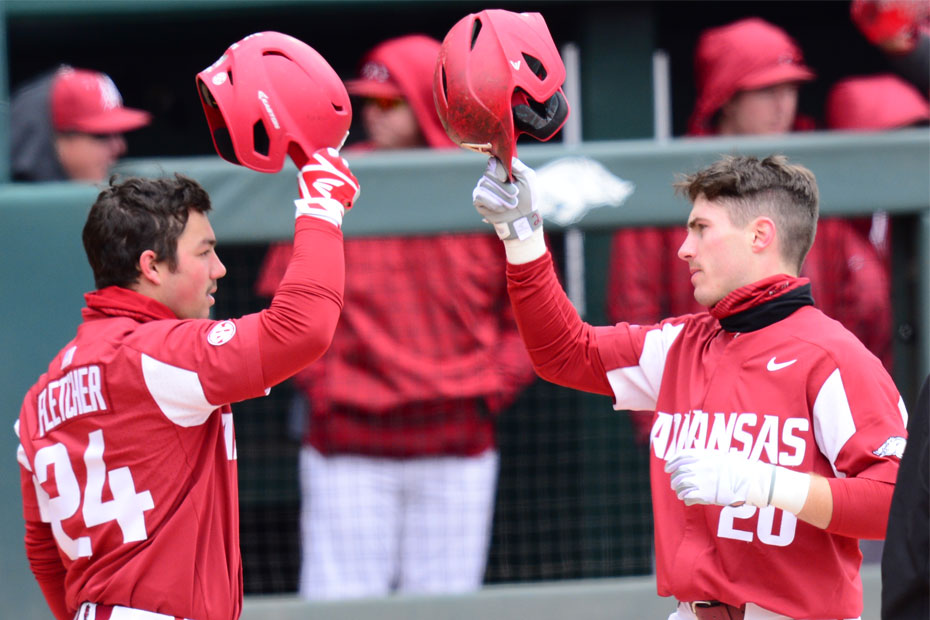 Second Half of Conference Play Starts In Starkville

STARKVILLE, Miss. – The third-ranked Razorback baseball team begins the second half of its conference season this weekend when it starts a three-game series with the Mississippi State Bulldogs on Friday at Dudy-Noble Field. Arkansas is fresh off a 10-game homestand, winning nine of those games.

Junior pitcher Blaine Knight will get the call for the Friday night start, once again, and will be going opposite Konnor Pilkington. It’s the same pitching matchup that fans saw on SEC opening night one year ago where Knight outdueled Pilkington to lead the Razorbacks to a 3-1 victory and the eventual three-game sweep.

Knight will be making his tenth start of 2018 on Friday and has yet to allow more than three earned runs in any appearance. He currently has the fourth-lowest ERA in the SEC and will be going for his seventh win of the year. His 6-0 record is one of only three undefeated records in the league (M. Kilkenny – Texas A&M; S. Hunley – Tennessee).

After last week’s series win over South Carolina, the Razorbacks seem to have found their three-man rotation in Knight, Kacey Murphy, and Isaiah Campbell. In game one of last week’s doubleheader against the Gamecocks, Murphy took a perfect game into the seventh inning of a seven-inning game. Even though he gave up a lead-off single in the seventh, he was untouchable all day to earn his fifth win of the year. Had he gotten the final three outs, Murphy would have been the first Razorback to ever throw a perfect game.

In the back end of that doubleheader, Campbell looked to be back to form after missing the Ole Miss series. The Olathe, Kansas native threw five scoreless innings and only allowed two hits while walking one. It was his fourth start of the year of five innings or more and lowest hits allowed in a game this season.

Arkansas hopes to continue its strong offense that it’s shown over the last homestand led by freshmen Casey Martin and Heston Kjerstad. Martin is coming off a 2-for-3 game against Missouri State with four RBIs. Kjerstad, who also homered in Tuesday’s win, leads the Hogs with a .373 batting average and is tied for the team lead with nine home runs.

FOLLOW LIVE
All games this weekend will be available on SEC Network+ via the Watch ESPN app and WatchESPN.com.

As always, Arkansas’ Sportscaster of the Year Phil Elson will call all three games on the radio for the Razorback Sports Network from IMG. That radio broadcasts are also available on the Razorback Gameday app.

RAZORBACK PRIME 9
>> Arkansas goes on the road this weekend to face Mississippi State, as it looks for its first road conference series win of the year. The Hogs have won four of the last five against Mississippi State.

>> The Razorbacks have won seven of eight game ones of a three-game series this year. Last week’s loss to South Carolina was the only blemish to that record.

>> With his RBI-single in the first game of the doubleheader with South Carolina last week, Carson Shaddy hit the 200-hit mark for his career. Now at 202 hits, he needs just 27 more to crack the Arkansas all-time top 10.

>> Arkansas ranks first in the SEC with 36 double plays and turned three against Missouri State on Tuesday. In 10 games this year, the Hogs have turned a double play two or more times.

>> The Razorbacks are 11-7 in games decided by two or less runs this year. With Thursday’s 3-2 loss to South Carolina as the only drawback, Arkansas has won four of its last five one-run games.