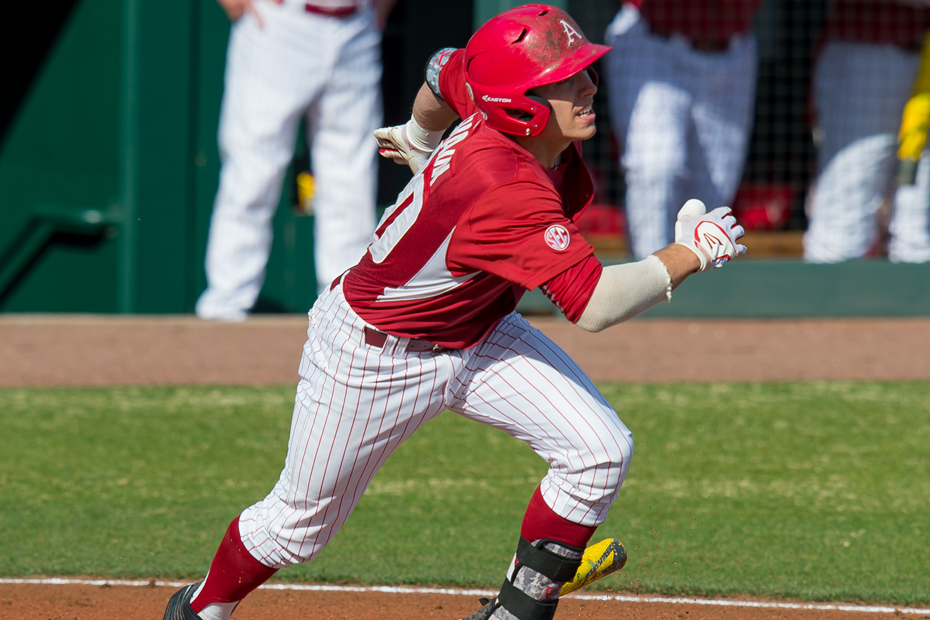 FAYETTEVILLE, Ark. – No. 12 Arkansas baseball had a tough time getting on top of Louisiana Tech’s pitchers in Wednesday’s midweek contest at Baum Stadium. Third baseman Carson Shaddy hit his fourth home run of the year in the first inning, but the Hogs only managed one more run the rest of the way and fell to the Bulldogs, 3-2.

With the loss, the Razorbacks (8-1) suffer their first loss of the season, snapping an eight-game winning streak that turned into the third-best start under Dave Van Horn and fourth-best start in school history. Louisiana Tech (6-2) picked up its sixth win of the season and second against a ranked opponent.

I’m disappointed that we lost the game,” Arkansas head coach Dave Van Horn said. “It was a good ball game, obviously. We had our chances and the game just did not go our way. They got the big hit and we didn’t. It was a well-played game. It’s like I told the team, you’re not going to win them all. You just hate losing a game you thought you had a shot to win it with a couple more good at bats.”

Other than Shaddy’s home run, Arkansas’ offense only managed six hits, which is a season-low through the nine games on the year. Junior Clark Eagan did turn in a nice 2-for-3 game with an RBI and a walk for his team-leading fifth multi-hit game this season. Only Eric Cole, Rick Nomura and Tucker Pennell were the other Razorbacks that found their way into the hit column on Wednesday.

“For me, I know that is a really good team,” Shaddy said after the game. “They are going to be in a regional and possibly a super-regional later on in the year, so it would have been really nice to beat them. It’s tough, but we aren’t the Golden State Warriors, no one is going to be like that. This is baseball. Everyone is going to lose a game. Like (Assistant) coach (Tony) Vitello was saying at the end of the game, it’s how you respond. We are going to come out here and show our work ethic tomorrow in practice and come out here and get after it this weekend.”

Shaddy’s home run was his only hit of the game, making him 1-for-2 on the afternoon with two walks. The long ball extended his current hitting streak to nine games, which is currently the longest on the team. In the at-bat, Shaddy smashed a 1-0 pitch the opposite way on a day the wind was blowing in from right field. Shaddy still had enough muscle on it to sneak it over the right field fence just missing the scoreboard.

Junior James Teague picked up the loss, making him 1-1 on the year. Teague came in to relieve starter Weston Rogers in the middle of the third inning and pitched well until running into trouble in the sixth inning. Louisiana Tech led off with a double and moved him to third on a wild pitch, before being able to bring him home on a sacrifice fly to centerfield.

The run ended up being the difference maker as Arkansas only managed two hits and six base runners the rest of the way.

After Shaddy’s home run in the first, Arkansas seemed to be picking up right where it left off from the Houston College Classic last week. The homer makes it the third-straight game a Razorback has hit one over the fence and the sixth in those last three games. As for Shaddy, he now has four home runs in the last five games, which ties for the team-lead.

Unfortunately, Rogers gave up two runs in the third inning off three singles before being pulled for Teague. Those three hits were the first for the Bulldogs on the day. Rogers finished the game with 2.2 innings pitched, three hits, two earned runs and one strike out.

Arkansas responded in the bottom half of the third, getting great two out at-bats from the top of their lineup. Eric Cole and Shaddy both reached via a single and a walk, respectively. Cole later scored on an Eagan single to centerfield to make it a tie game at 2-2. Eagan now has 11 RBI on the season.

The Hogs had a chance in the seventh to re-take the lead when they had the bases loaded and two outs. A Jake Arledge walk, followed by a one out single by Tucker Pennell had Arkansas in business and forced Louisiana Tech to make a pitching change. The Bulldogs took out Clancy and replaced him with Phillip Diehl, who struck out Cole and then intentionally walked Shaddy to load the bases. Diehl struck out Eagan also in the next at-bat to end the inning and the Razorback threat.

Arkansas stays home this weekend as they host a three-game series with Eastern Illinois starting Friday at Baum Stadium. First pitch for Friday’s game is set for 3 p.m. Saturday’s game will be at noon, followed by Sunday’s game at 1 p.m.

All games this weekend will be broadcast online on SEC Network+ and on the radio via the Razorback Sports Network from IMG.