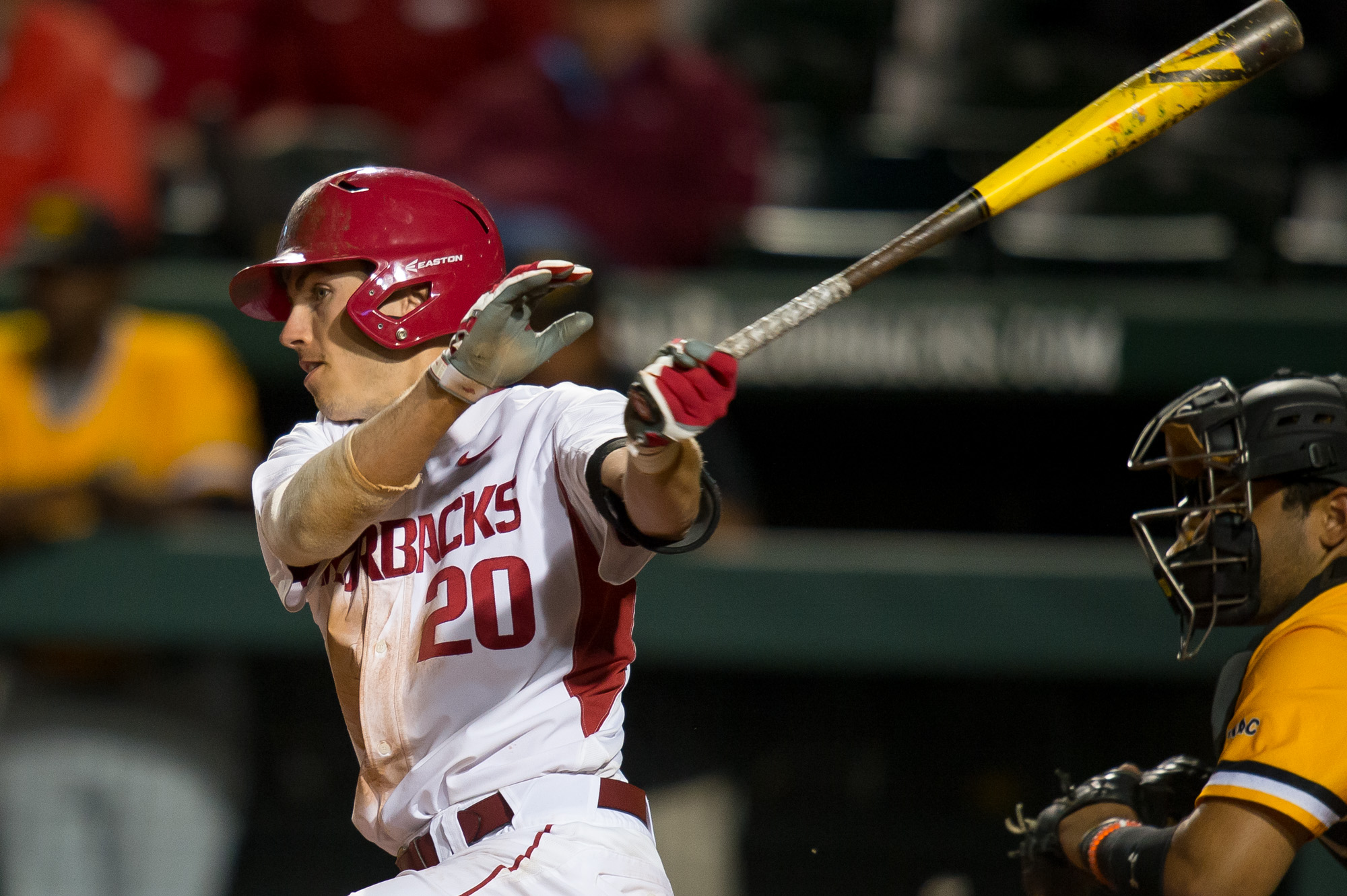 FAYETTEVILLE, Ark. – Sophomore Carson Shaddy had a perfect night at the plate Tuesday, going 3-for-3 with six RBI, two doubles and two runs scored to lead No. 13 Arkansas over Grambling State, 14-4, at Baum Stadium. The six runs batted in by Shaddy is the most by a Razorback this season and most since former Hog Brett Eibner plated seven in an NCAA Regional game against the same Grambling State team back in May of the 2010 season.

All nine of Arkansas’ (14-3) starters in the batting lineup reached base in some form during the game as the Hogs tallied 15 hits, tying for their second-highest total this season. Along with Shaddy, four other players had a multi-hit game on Tuesday. Clark Eagan and Rick Nomura each had three hits apiece, while Luke Bonfield and Michael Bernal added two.

Isaiah Campbell (2-0) picked up the win in his second start of the season, going four innings and giving up three earned runs on four hits with one walk and four strikeouts. Campbell was followed by Hunter Hart, Ty Harris, James Teague and Jake Reindl as the bullpen only allowed four hits the rest of the way with one run scored.

Shaddy started things off strong for the Razorbacks in the first inning with his first of two doubles, clearing the bases to score three runs and put Arkansas ahead, 3-1. Shaddy becomes the fourth Arkansas player this season to hit two doubles in a game, joining Bonfield, Eagan and Tucker Pennell.

Grambling State responded in a big way in the third inning, hitting two solo home runs off Campbell to tie the game at 3-3, but the Hogs weren’t done with the bats as they scored three more in the bottom half of the third.

Again, it was Shaddy, who came through, as he delivered his second double in as many at-bats to score two more runs. After just two plate appearances, the Fayetteville-native already set a new career-high of five RBI. He later added a sacrifice fly in the bottom of the seventh for his sixth RBI.

Once the Hogs responded with those three runs in the third, Grambling State couldn’t recover, scoring only one more run in the fifth. Meanwhile, the Arkansas offense continued to pound the ball, scoring twice in the fourth, twice in the sixth and four in the seventh.

In the fourth, Nomura smacked a two-run home run over the right field wall, his third home run of the year and third in the last six days. The Hawaiian finished the game 3-for-4 with four runs scored and two RBI, both coming off the home run. Nomura has been on hot streak at the plate as of late. In his last five games, the senior has gone 10-for-19 (.526) with seven RBI and three home runs.

Arkansas and Grambling State are back on the field Wednesday to finish the two-game series with first pitch at 3 p.m. at Baum Stadium. The game will be broadcast on SEC Network+ with Alex Perlman and Troy Eklund calling the action.

“I thought our pitchers did a nice job tonight. We walked two hitters in nine innings and threw a lot of strikes. We put together a couple of big innings, but when we made mistakes, Grambling State made us pay for them. (Isaiah) Campbell had great velocity and was throwing the ball well with good breaking pitches. (Hunter) Hart was not throwing well in the beginning, but we let him get through it and he began to deliver better innings. It was good to see Harris come in and get the two left-handed hitters out, he did a tremendous job there. (James) Teague only threw five pitches, but we would like for him to be available on Friday. (Jake) Reindl also threw very well. We plan to start (Weston) Rogers tomorrow and play multiple pitchers from that point.” – Arkansas head coach Dave Van Horn on his pitchers’ performance on Tuesday

“I liked the doubles we put out. They keep the innings rolling. It was good to get that first one. Just before that, we had made the comment that the right fielder was playing too shallow. Because of the way the wind was blowing, we knew that that hit was going to score at least two runs. That counteracted the balls that Grambling State hit hard in the first few innings. It was nice for us to get the lead back and maintain it throughout the rest of the game.” – Dave Van Horn on the offensive showing from his team against Grambling State

“They’re throwing me a lot of off-speed and I had the feeling that it was coming on the first pitch; it did and Coach (Tony) Vitello just told me to just stay on my legs and I did that and I had a great result.” – Rick Nomura on his home run in the fourth inning

“I had only seen curveballs during the at bat, I knew a fastball was coming at some point and I stuck with my approach and good things happen.” – Carson Shaddy on his 3 RBI double in his first at-bat Tuesday night