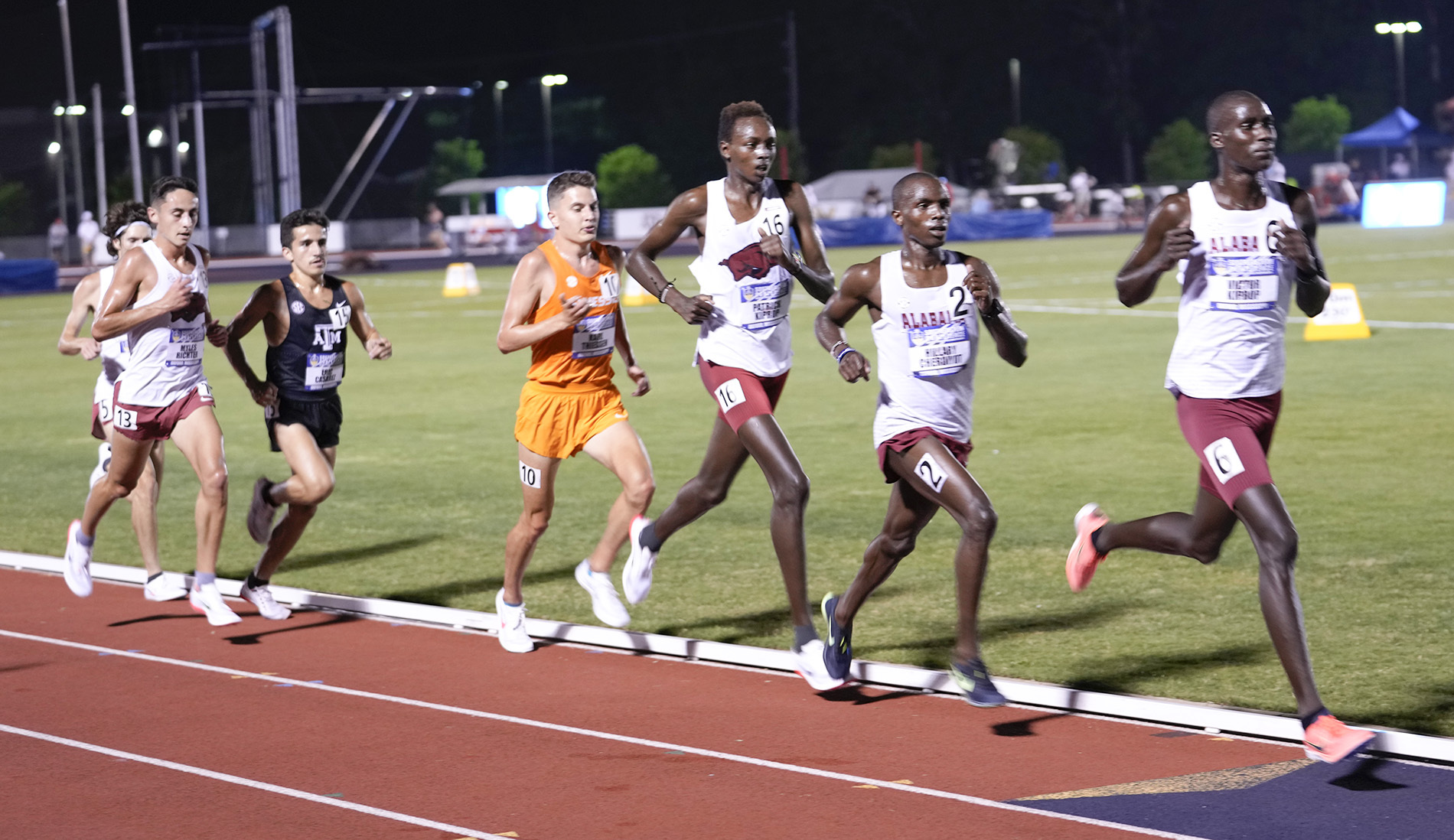 OXFORD, Miss. – Following a lightning delay of nearly two hours on the opening day of the 2022 SEC Outdoor Championships at Ole Miss Track & Field Complex, the Razorbacks ended the evening with 16 points in the 10,000m final.

Through three scored finals, Arkansas is currently in third place behind Alabama (29) and Georgia (17). Other schools earning double digit points on Thursday, with finals also held in the hammer and javelin, included Mississippi State (13), LSU (12), and Tennessee (11).

Arkansas collected 16 points from a 2-3-7 finish from Patrick Kiprop, Myles Richter, and Jacob McLeod, while Ryan Murphy, who led the field for a portion of the race, finished 13th.

Kiprop challenged Alabama’s Victor Kiprop through the latter stages of the race, finishing in 29:22.30 as runner-up to the winning time of 29:16.07.

“I wanted to win the whole thing tonight,” said Patrick Kiprop. “When we started the race, no one wants to be second, everybody wants to win the race. I’m happy for my team with the points we scored tonight. As a team we did a great job.

“I decided to attack it with 1,000m to go in the race. My aim was to go at 600m. I think today was a great experience, because it was for a championship. I’ll learn from this for the next time and work on my kick for the end of the race.”

Richter was part of a lead pack of five runners and separated from the trio of runners left after the pair of Kiprop’s bolted away. Richter earned a bronze medal in clocking 29:29.38 ahead of Karl Thiessen of Tennessee (29:32.36) and Alabama’s Hillary Cheruiyot (29:44.82).

“I’m stoked, that’s exactly what I wanted,” stated Richter. “I wanted third place and to be on the podium. I was just thinking about six points, that’s my job, and I got it done. I think I saved a lot for my legs in the 5k. I’m hoping to do it right again in two days.

“When it broke up with five of us left, I knew I had to beat an Alabama guy and a Tennessee guy. That’s exactly what I did. I had a lot in the tank for the last two laps and I just tried to stick with those top three guys. Then I made a move.”

“We knew we were going to have to take it out since it’s a big team battle between us and Alabama,” noted Richter. “Nobody was going to want to take the lead through the middle stages, so we had Murphy on our side and I’m always going to want that.”

Through the first day of the decathlon the Razorback tandem of Daniel Spejcher and Noah Swaby are currently in third and ninth place among a field of 11. Spejcher totaled 3,998 points as Swaby earned 3,677.

Qualifying races sent Leroy Russell III and Connor Washington to the final of the 800m and 200m.

Washington sped to a season best of 20.60 (-0.3 wind) to finish second in his heat behind a 20.39 for South Carolina’s Evan Miller. Washington’s previous best this season was a 20.64 to win the Arkansas Twilight last week.