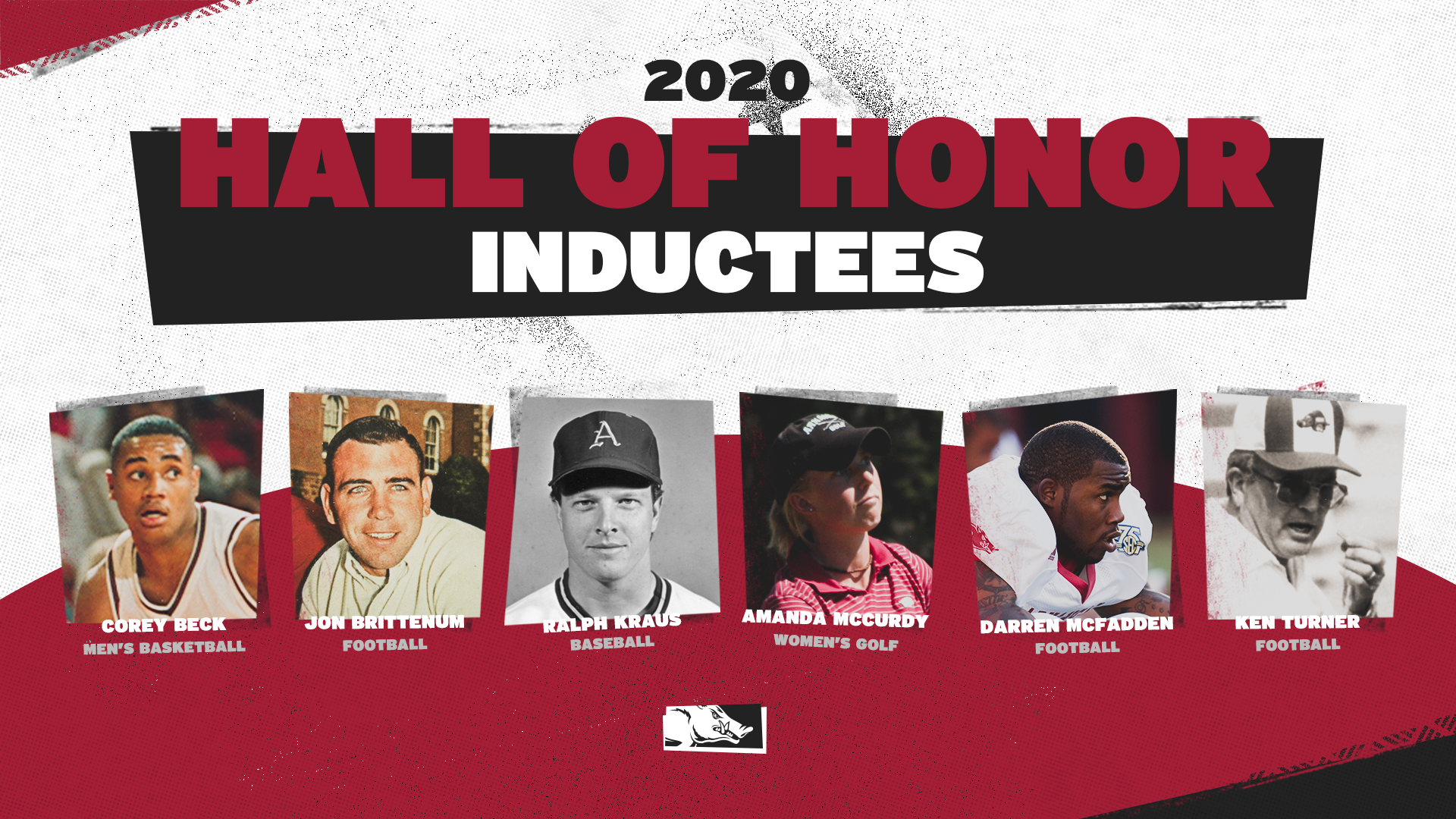 FAYETTEVILLE, Ark. – Six former University of Arkansas student-athletes, including a College Football Hall of Famer and two-time Doak Walker Award winner and the point guard on the Razorbacks’ national championship men’s basketball team, have been selected as members of the 2020 class of the University of Arkansas Sports Hall of Honor.

Corey Beck (men’s basketball), Jon Brittenum (football), Ralph Kraus (baseball), Amanda McCurdy (women’s golf), Darren McFadden (football) and Coach Ken Turner (football) are the most recent inductees elected to the UA Sports Hall of Honor based on a vote by former Razorback letter winners in conjunction with the A Club. McFadden, Arkansas’ all-time leading rusher, was a first-time addition to the Hall of Honor ballot, following completion of his career in the National Football League.

“We are excited to honor an extraordinary group of Razorbacks as part of the 2020 class of the UA Sports Hall of Honor,” Vice Chancellor and Director of Athletics Hunter Yurachek said. “The outstanding accomplishments of these six individuals, both individually and collectively, is remarkable. One of the truly special parts of the Hall of Honor weekend is the opportunity to gather together as a Razorback family to celebrate our former greats. With that in mind, we have postponed the induction of this year’s class until the fall of 2021 when we can recognize them in person along with our 2021 honorees.”

Corey Beck, who played at the University of Arkansas from 1993-95, was a 1995 All-SEC selection as he drained 49 percent of his 3-point shots, second on the school’s single-season list, while handing out 207 assists, which ranks third. Both of those totals are records by a Razorback for a senior season. For his career, Beck had 483 assists, third on the Arkansas all-time list as he led the team in the category in each of his three years with Razorbacks. In SEC games only, Beck made 54 percent of his shots for his career, which ranks second on the school’s all-time list. Beck had a double-double – scoring 15 points and snagging 10 rebounds – in the 76-72 victory over Duke to secure the 1994 NCAA Championship. The Memphis, Tenn., native would also be named to the 1994 NCAA Final Four All-Tournament Team. While Corliss Williamson and Scotty Thurman garnered most of the attention, Beck was described as the “blue-collar leader” of that squad. Beck went on to play in the NBA with the Charlotte Hornets and Philadelphia 76ers. In 2019, Beck was named Arkansas’ Allstate® SEC Basketball Legend.

Jon Brittenum quarterbacked the Razorbacks from 1963-66, leading a pair of top 10 teams in his final two years on the Hill. He threw for over 1,100 yards in both 1965 and 1966, earning All-Southwest Conference honors both years. Brittenum led the Hogs to a No. 1 ranking in ’65 entering the Cotton Bowl as the second-ranked team in the country, and possibly might have led to the program’s second consecutive national championship if not for separating his shoulder in the bowl game vs. LSU. The 1965 season included a 27-24 victory over No. 1 Texas with Brittenum calling the plays, propelling the Hogs to the top spot in the country after the halfway point of the season. Head Coach Frank Broyles penned in his autobiography that Brittenum was, “the best passer on the move that I’ve ever seen. He could throw it like a frozen rope on the sprint-out series. He was the perfect passer-runner for the system that we played at the time.” Brittenum ran for 494 yards over his three years at the helm of the Razorback offense. He would go on to play one year for the San Diego Chargers in 1968.

An All-American outfielder in 1986, Kraus also earned All-SWC and SWC All-Tournament honors that year. He was named to the College World Series all-tournament team in 1985 and received the George Dickey Award in 1986. He led the team with a .397 average in 1986 and tied for the team led with 91 hits. He helped the Hogs go 51-15 and reach the College World Series in 1985 and 43-17 and reach the NCAA regionals in 1986. His 245-career hits rank fifth all-time while his 58 doubles and 400 total bases are fourth and his 96 extra base hits are sixth. Kraus will live in the Arkansas record books for several amazing moments on the field, including finishing off the program’s first triple play in school history during the 1983 SWC Tournament. He also helped usher in the school’s first night game in 1985 in classic style, launching a home run in the bottom of the ninth to defeat Texas. In 1986, Kraus was selected as the recipient for the Frank Broyles Award, recognizing the top male Razorback student-athlete. He was drafted in the 10th round of the 1986 MLB Draft by the New York Yankees, playing four years of pro ball in the organization from 1986-89.

Amanda McCurdy, who played for Arkansas from 2002-06, played a major role in helping make the Razorbacks a team recognized nationally on the course. Along with Courtney Mahon, McCurdy helped Arkansas make its first two NCAA Championship appearances in 2005 and 2006. She was Arkansas’ first multiple-event winner, taking home multiple titles in both 2003-04 and in 2005-06. In all, McCurdy ended up winning four individual medals during her time on the Hill, one of just four Hogs to ever accomplish the feat, joined by fellow Razorback legends Stacy Lewis, Emily Tubert and Maria Fassi.  For her efforts, the El Dorado, Ark., native was selected to an All-SEC team three times during her illustrious career, including a First-Team appearance in 2006. McCurdy also earned national acclaim following her 2005-06 campaign, as she was recognized as an All-American Honorable Mention by both the National Golf Coaches Association and Golfweek.

McFadden, one of the nation’s most electric running backs of his era, tormented opposing defenses to the tune of a school record 4,590 rushing yards and 41 rushing touchdowns over just three seasons from 2005-07. He became only the second back-to-back recipient (2006, 2007) of the Doak Walker Award, given to college football’s premier running back, and finished as the Heisman Trophy runner-up in both campaigns. McFadden garnered Walter Camp Player of the Year recognition in 2007 and is one of only two running backs in the last 12 years to earn the award. The Little Rock product joined USC’s Reggie Bush as the only Consensus All-American halfbacks of the 2000s and was selected First Team All-SEC every year of his career while grabbing SEC Offensive Player of the Year honors in 2006 and 2007. In his final year, McFadden set the single-season school record with 1,830 rushing yards and ran for 16 scores. During the season, he equaled the single-game conference rushing record set in 1978 streaking for 321 yards against South Carolina. Later that season, he accounted for four touchdowns and 206 rushing yards in an epic 50-48 triple-overtime triumph at LSU. His 4,590 career yards on the ground is third in SEC history and 5,881 career all-purpose yards rank second. The fourth overall selection by Oakland in the 2008 NFL Draft, McFadden tied defensive tackle Dan Hampton (1979) for the highest Razorback draft choice of the post NFL-AFL Merger era. He enjoyed a 10-year NFL career with the Raiders and Dallas Cowboys. In 2019, he was inducted into the College Football Hall of Fame.

Ken Turner joined the Razorbacks’ coaching staff in 1970 as a graduate assistant for head coach Frank Broyles’ staff after serving as the head coach at West Memphis, where he was 36-10-4. Coach Broyles promoted Turner in 1972 to run the B-Team for the Hogs before making him the team’s offensive line coach in 1973. Turner oversaw the offensive line, tight ends, receivers and kickers for Broyles. Turner worked in the same capacity for Lou Holtz during his tenure from 1977-83 and coached the tight ends and kickers during Ken Hatfield’s first five seasons as the Head Hog. Turner coached six first-team All-Americans for the Razorbacks – K/P Steve Little (1976, 77), OL Leotis Harris (1977), K/P Bruce Lahay (1981), OL Steve Korte (1982), P Greg Horne (1986) and K Kendall Trainor (1988). Including second-team All-American K Ish Ordonez (1979), Turner has coached all but one of Arkansas’ eight All-American kickers and punters. Turner left in 1989 to return to his alma mater – Henderson State – to serve as the Reddies Director of Athletics. He added head coaching duties to his agenda from 1990-93 before retiring as the AD in 2000. He led the Reddies from NAIA to the NCAA and was inducted into the Arkansas Sports Hall of Fame in 2001.