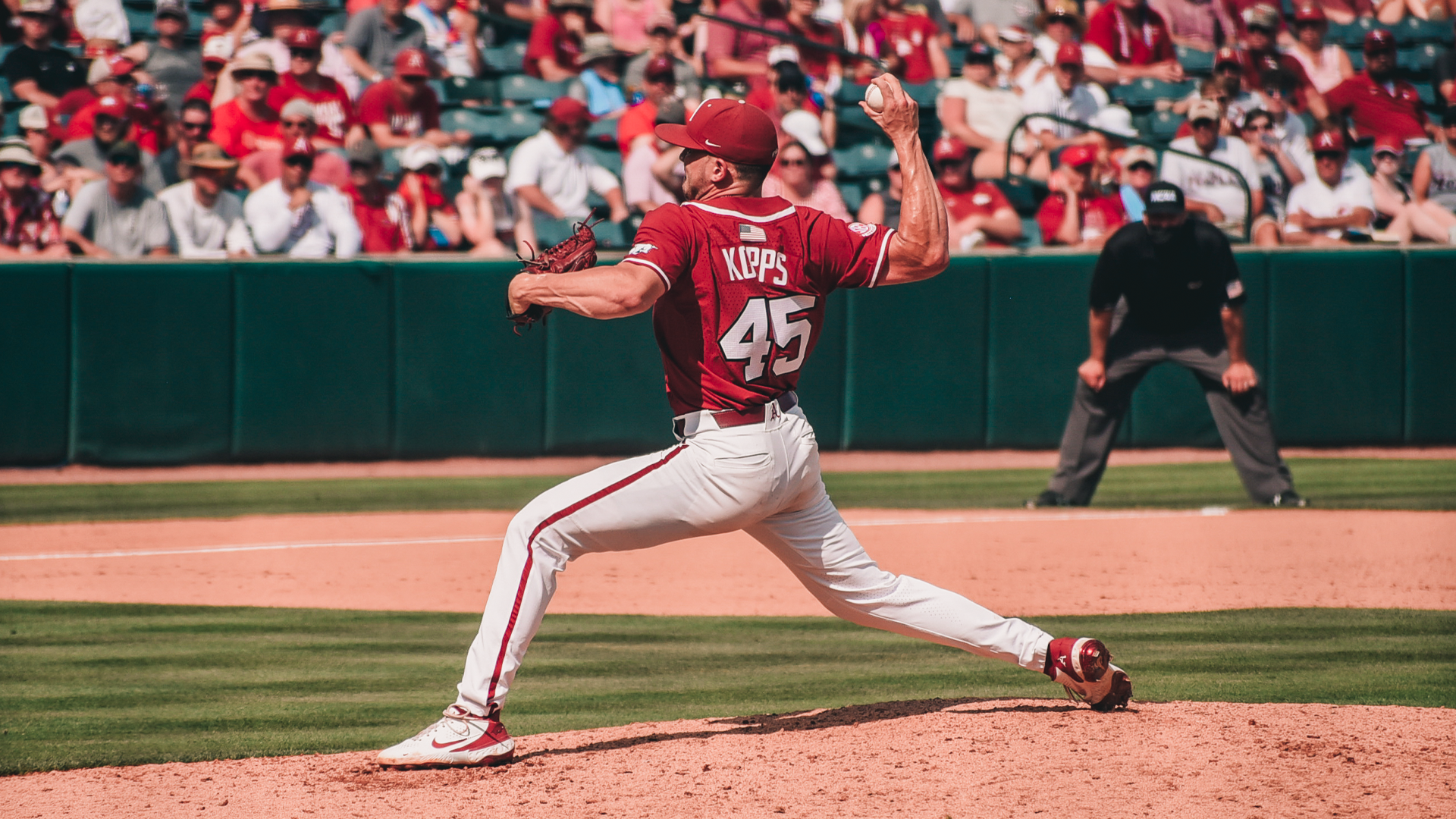 FAYETTEVILLE, Ark. – The second-most selections in the 2021 MLB Draft currently belongs to the Arkansas Razorbacks.

As college baseball’s most dominant pitcher, Kopps finished the 2021 campaign with a 12-1 record and 11 saves. He posted the nation’s lowest ERA (0.90) and WHIP (0.76), striking out 131 in 89 2/3 innings of work. Opposing hitters had a .162 average against the right-hander, who set the program’s single-season record for ERA during his historic year.

Outfielder Christian Franklin went to the Chicago Cubs in the fourth round (No. 123 overall) before pitcher Ryan Costeiu was picked up by the Los Angeles Angels in the seventh round (No. 201 overall). Catcher Casey Opitz and pitcher Patrick Wicklander were selected in the eighth round by the Cubs (No. 244 overall) and Tampa Bay Rays (No. 251 overall), respectively.

Franklin heads to the Cubs organization after slashing .274/.420/.544 with 13 home runs and 54 RBI during the 2021 campaign. The outfielder also hit 15 doubles and two triples, swiping a team-best 11 bases on the year while playing elite defense in center.

Costeiu, meanwhile, struck out 40 in 30.0 innings of work out of the bullpen this past season. The right-hander, who made 26 appearances and posted an 8-3 record, held opposing hitters to a .198 batting average.

Opitz will join Franklin with the Cubs organization after slashing .257/.367/.346 in 2021. The Razorback captain swatted two homers and drove in 18 runs while providing strong defense behind the plate.

Wicklander emerged as the Razorbacks’ No. 1 starter after beginning the year out of the bullpen. The left-hander, who was diagnosed with Type 1 diabetes prior to the season, finished with a 7-1 record and 2.09 ERA in 77 2/3 innings of work, punching out 85 batters while limiting opposing hitters to a .226 average.

Pitcher Lael Lockhart rounded out Monday’s haul of Razorback draftees. The left-hander was scooped up by the Los Angeles Dodgers in the ninth round with the No. 282 overall pick.

Lockhart, a graduate transfer from Houston, was Arkansas’ regular Sunday starter this past season, pitching to a 3-3 record with a 4.47 ERA. The lefty struck out 68 in 58.1 innings and came within an out of tossing the first perfect game in program history against Georgia at the SEC Tournament.

The Hogs had four pitchers selected in the draft’s first 10 rounds for only the second time in program history. Arkansas also achieved the feat during the 2019 draft when Isaiah Campbell (CBB, No. 76 overall – Seattle Mariners), Matt Cronin (fourth round, No. 123 overall – Washington Nationals), Jacob Kostyshock (eighth round, No. 249 overall – Colorado Rockies) and Cody Scroggins (ninth round, No. 287 overall – Boston Red Sox) all went in the first 10 rounds.

Arkansas is one of six schools with four pitchers taken through the draft’s first 10 rounds. Florida, Texas Tech, South Carolina, Vanderbilt and Indiana have also had four pitchers go so far.

Through the first two days of the 2021 MLB Draft, three Razorback signees have been selected, including one in yesterday’s first round. Infielder Max Muncy was drafted by the Oakland Athletics (first round, No. 25 overall) Sunday before infielder Jordan Viars (third round, No. 84 overall – Philadelphia Phillies) and pitcher/outfielder Drew Gray (third round, No. 93 overall – Chicago Cubs) heard their names called Monday.

The draft concludes with rounds 11-20 tomorrow, starting at 11 am CT with no delay between selections.