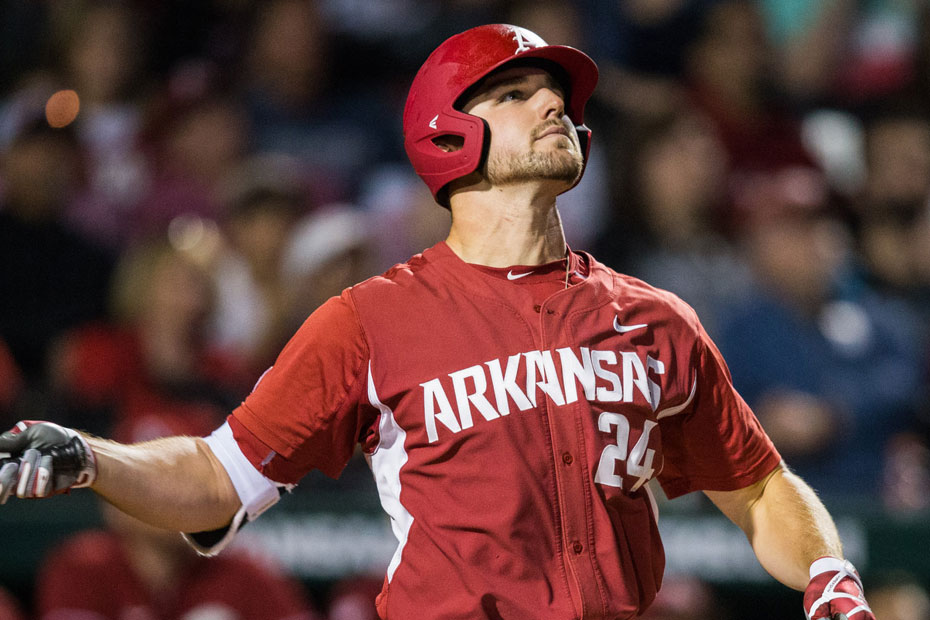 COLLEGE STATION, Texas — Chad Spanberger’s 10th inning home run was the final blow No. 16 Arkansas needed to take the series opener over No. 22 Texas A&M Thursday night at Blue Bell Park. The Aggies had already forced the game into extras with a single run in the bottom of the ninth, but Spanberger’s 12th home run of the year silenced the Aggie crowd in the 10th and gave the Hogs their third extra-inning win of the season.

The home run for Spanberger was his only hit of the night as he went 1-for-4 at the plate. Coming into the game, he only had three hits in 21 at-bats, one of those hits being a home run. However, Thursday night’s homer might have been his most clutch hit of the year.

Arkansas had allowed Texas A&M to tie the game at 4-4 in the ninth after Jake Reindl couldn’t close out the game, allowing a lead-off walk to Hunter Coleman and a double to Cole Bedford. Jorge Gutierrez followed Bedford with a deep sacrifice fly to right field to tie the game and send it to extras.

Two quick outs started the top of the 10th for the Hog bats and looked as if there would be no response. Fortunately, Jake Arledge came through with a big two-out single to put a runner on and then Spanberger unloaded an opposite field home run that appeared to fly over the Texas A&M video board in left field.

On the moujnd, junior pitcher Trevor Stephan threw another gem of a game, even after giving up a home run to Braden Shewmake in the third inning that, at the time, gave Texas A&M the 3-2 lead. After the long ball, Stephan allowed just two hits over the next four innings, striking out six in the process before running into trouble in the eighth.

Stephan had to settle for the no-decision, finishing with 7.2 innings pitched, three runs allowed, and 10 strikeouts with only one walk. It was his third-straight start of seven innings or more and 10 or more strikeouts.

Reindl corralled the victory, his third of the year after coming in to pitch in the ninth inning. Even though he gave up the game-tying run, he was able to come back and finish off the 10th with a 1-2-3 inning, needing just 14 pitches.

Offensively, the Razorbacks didn’t struggle at the plate as they knocked out 15 hits compared to only six by the Aggies. Jax Biggers led all hitters, going 3-for-5 with three RBIs and a run scored. He was just a triple short of the cycle as his eighth inning two-run home run was his fourth of the year.

Biggers continues to be one of Arkansas’ most consistent hitters this year as he is hitting a team-leading .333 on the year and .337 against SEC opponents. He has at least one hit in six of his last seven games and now has 18 multi-hit games, five of three hits or more.

Razorback Quotables
“We told our guys once they scored, ‘Let’s get in the dugout. We still have a chance. We’re out of school. Let’s stay here all night and do whatever we have to do.’ We just wanted to relax them a little bit. Obviously, we got a big two-out single by our lead-off man, Jake Arledge. (Chad) Spanberger had a great at-bat and on the sixth or seventh pitch of the at-bat, he hits one over the top of that scoreboard, which was pretty amazing.” – Head coach Dave Van Horn on the extra-inning victory over Texas A&M

“The story of the night, to me, was Trevor Stephan. He made one bad pitch after an error and gave up three runs on the home run and all of the sudden we were down. We just never got those big hits that gave us that big inning. (Texas A&M’s) pitching is really good and they did a great job of holding us down. It seemed like we left a lot on base. It was frustrating, but it’s how the game works sometimes. You just have to keep grinding it out.” – Head coach Dave Van Horn on how Arkansas was able to stay in the game

Up Next
Arkansas is back on the field with Texas A&M tomorrow for game two of the series starting at 6:30 p.m. The game can be seen online only on SEC Network+ via the Watch ESPN app and WatchESPN.com. Phil Elson will have the call on the radio via the Razorback Sports Network.