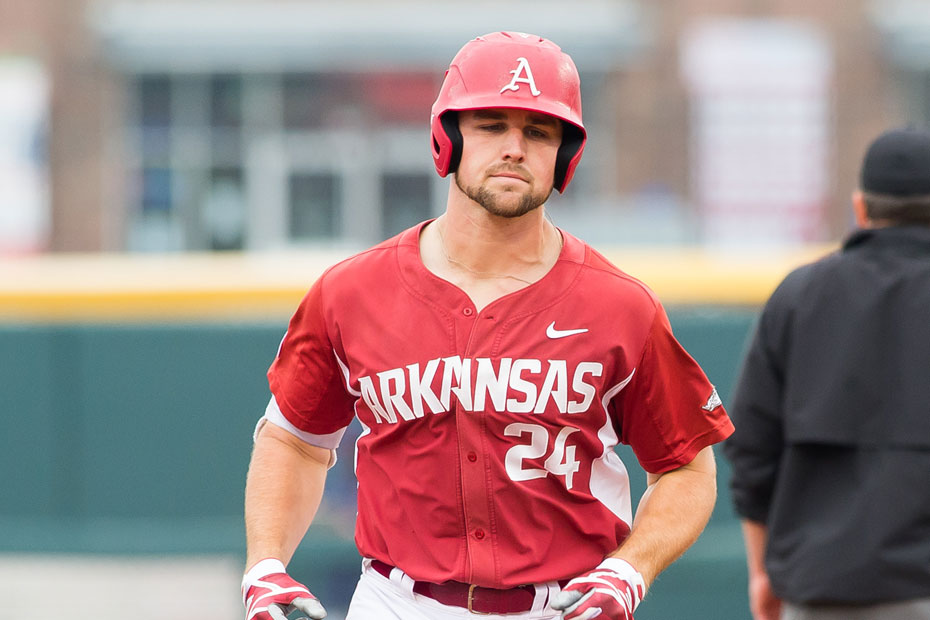 COLLEGE STATION, Texas — The 16th-ranked Razorback baseball team was firing on all cylinders Saturday, using a great start from Blaine Knight and a strong offensive performance from Chad Spanberger to shutout the 22nd-ranked Texas A&M Aggies, 8-0, at Blue Bell Park.

The win is a nice cap on the regular season for Arkansas as it finishes 39-15 overall and 18-11 in conference play with six series wins in Southeastern Conference play. The victory also guarantees Arkansas as the four-seed in next week’s SEC Tournament in Hoover, Ala.

Spanberger hit a career-high two home runs in the game, part of a 2-for-5 day with two runs scored and two RBIs. He finishes the weekend with three home runs against the Aggies and now has 14 for the year, which takes over the team lead and puts him in the top five in the Southeastern Conference.

With the strong offensive output by the Hogs, Knight was able to go out and throw comfortably for six innings, allowing just three hits with no walks and two strikeouts. He earned his seventh win of the year and first since April 13 against Georgia.

Knight was seemingly locked in from the first pitch as he retired 11 of the first 12 batters he faced and never let a runner get past first.

Kevin Kopps followed Knight to pitch the final three innings and picked up his second save of the season after allowing just two hits and striking out four. It was the fourth shutout for Razorback pitchers this season and second in conference play, the last coming against Tennessee (May 6) in Trevor Stephan’s seven-inning shutout.

Moments That Mattered
After allowing a lead-off single to Nick Choruby in the first inning, Knight retired the next 11 batters and none by way of a strikeout. Hunter Coleman broke that streak in the fourth with a single of his own, but Knight, again, settled in and retired another five in a row.

With Knight pitching well, Arkansas was able to manufacture some runs on Texas A&M starter Stephen Kolek early on. Two runs came home in the third inning off RBI singles from Eric Cole and Luke Bonfield. For Cole, the outfielder has had an outstanding series, going 4-for-14 (.286) with two doubles and two runs scored.

Arkansas made it 3-0 in the fourth after an RBI single from senior Jake Arledge drove in Dominic Fletcher. For Arledge, it was his second RBI of the series. He finished the game 2-for-4 (.500), both hits were singles, and gives him his 13th multi-hit game of the year.

In the fifth inning, Arkansas was able to chase Kolek with the help of a solo lead-off home run by Spanberger. Later, he homered again, another solo shot in the eighth, which extended Arkansas’ lead to 8-0. It’s the first multi-home run game of his career for Spanberger and he’s the first Razorback to do it in a game this season.

The Razorbacks got another run in the fifth after the Texas A&M pitching change as Fletcher knocked in an RBI with a single through the right side. Fletcher, like Cole, finishes the regular-season with a strong series as well. After going 3-for-4 on Saturday with two runs scored and an RBI as he has 14 hits in the last eight games with six RBIs and four home runs.

Razorback Quotables
“We were just playing to get better today and to ensure ourselves two ballgames in Hoover. It’s one of those tournaments where you want to win it, but you don’t want to wear yourself out. I’m just proud of our team for coming out and giving a great effort today.” – Head coach Dave Van Horn on getting the win and earning a top-four seed in the SEC Tournament

“You have to be able to play on the road, especially in this league where all the venues are pretty tough. (Texas) A&M may be one of the toughest. We didn’t make any mistakes today and that was big. We didn’t walk very many or kick the ball around like we did yesterday and give them a lot of extra at-bats. It was just a good ballgame for us.” – Head coach Dave Van Horn on winning an important series on the road

“It’s nice to get more rest. Our coaches had a plan and I wasn’t going to bug them about when I was throwing. I just knew they would tell me ahead of time. So I got prepared and was ready to go.” – Blaine Knight on pitching after an extra day of rest

“We knew this was going to be a big game coming in and was going to get us a bye in the tournament if we win with an extra day of rest. I’m glad the coaches trusted me enough to come in and do that. It was fun.” – Blaine Knight on having to pitch in an important game that had seeding implications

Up Next
Arkansas will play its first game of the 2017 SEC Tournament on Wednesday with its opponent still to be determined as the rest of the day’s games play out as well as the single-elimination games from the first round of the tournament on Tuesday. First pitch for Arkansas’ game is scheduled for 8 p.m. and will be televised on the SEC Network.