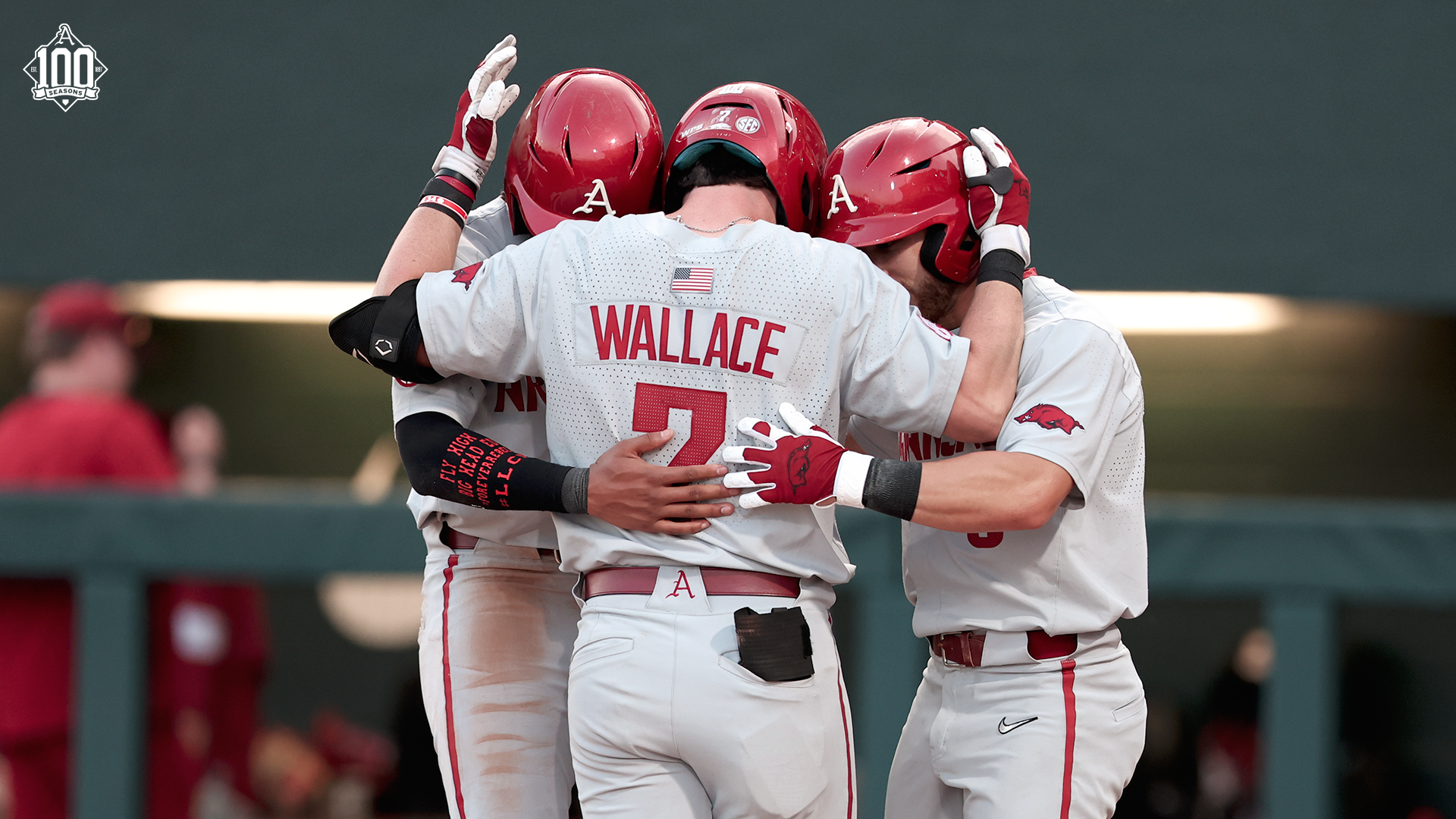 TUSCALOOSA, Ala. – Behind Peyton Stovall’s two-run tater and Cayden Wallace’s go-ahead three-run shot in the fifth, No. 7 Arkansas (38-14, 18-10 SEC) overpowered Alabama (27-25, 10-17 SEC) with seven unanswered runs on its way to a 7-3 series-opening win on Thursday night at Sewell-Thomas Stadium.

With the victory, the Razorbacks have now won 18 or more conference games for the fifth consecutive season. SEC East foe Florida was the last team to achieve the feat, doing so from 2014-18.

Will McEntire made his first career SEC start on Thursday night and gave the Razorbacks four innings of three-run ball. The redshirt sophomore struck out four while allowing eight hits and issuing two walks before giving way to the bullpen.

Alabama mounted a 3-0 lead after four innings of play, but Arkansas turned it up a notch offensively in the fifth. The Hogs broke through for five runs, thanks to Stovall and Wallace’s rally-igniting home runs.

Stovall’s two-run homer to right center was his fourth of the season, while Wallace’s three-run tank to over the playground in left was his ninth of the year. Wallace is now slashing .306/.399/.526 with 46 runs batted in, which ties for the team lead.

Ahead 5-3, Arkansas turned to Kole Ramage, Evan Taylor and Brady Tygart to preserve the lead. The trio did exactly that, combining for eight strikeouts over five scoreless innings in relief of McEntire.

Ramage fanned two in his 1 1/3 innings out of the bullpen, while Taylor punched out a season-high four over two frames to improve to 5-0 on the season. Tygart locked down the final 1 2/3 innings, striking out two and securing his team-leading eighth save of the year.

The bullpen’s job was made even easier in the top of the ninth after Jalen Battles’ two-run double to the gap in left center extended the Hogs’ advantage to 7-3. Battles finished his night with a pair of hits, tying him with Wallace for the team lead in multi-hit games (17) this season.

Arkansas goes for its fifth consecutive series win over Alabama tomorrow night in a nationally televised ballgame at The Joe. First pitch is set for 7 p.m. Friday, May 20, on SEC Network with Tom Hart (play-by-play) and Chris Burke (analyst) on the call.