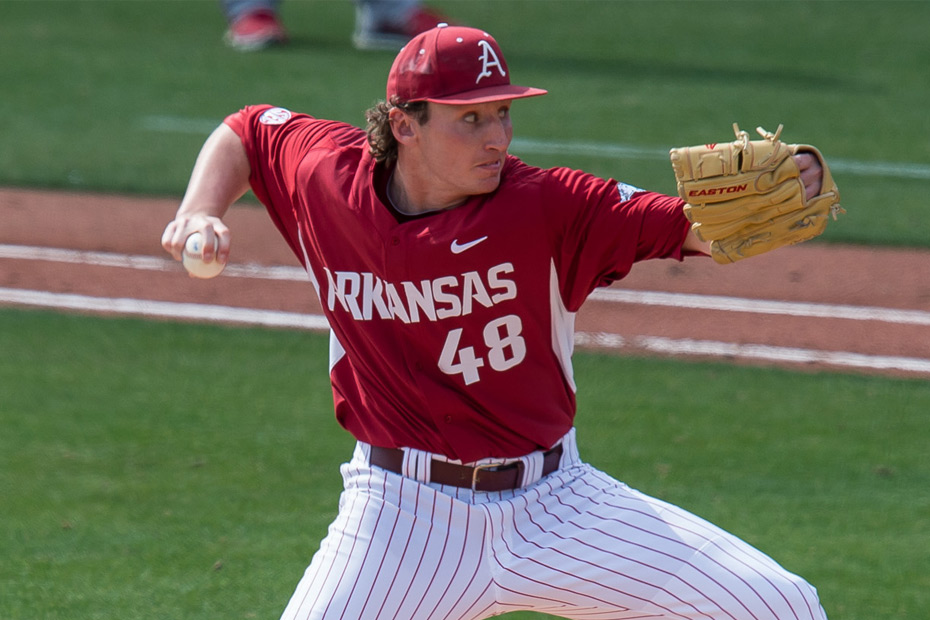 FAYETTEVILLE, Ark. – Making his Razorback debut on the mound, junior Trevor Stephan earned his first victory of the year and catcher Grant Koch delivered a key two RBI hit in the third inning to help lead Arkansas to the 5-1 win over Miami of Ohio Saturday afternoon at Baum Stadium.

In front of a huge crowd of 10,891 fans, the 11th-largest crowd in stadium history, the Hogs leaned on much of the same element that gave them Friday’s win, which was strong pitching. Stephan only threw four innings Saturday, but he struck out five batters and scattered three hits, while only giving up the one run, a home run in the fourth.

Over the last two games, Arkansas’ starting pitchers have thrown a combined eight innings and given up only six hits, one earned run, and struck out 10 batters. Neither starting pitcher gave up a walk, as well.

Offensively, Arkansas totaled 10 hits in the game, all singles with the exception of Koch’s two RBI double in the third inning. Eight different players recorded at least one hit, while Eric Cole and Dominic Fletcher turned in their second straight multi-hit day, each going 2-for-4 at the plate.

Moments That Mattered
The Hogs lit up the scoreboard in the first inning for the second straight day after Fletcher singled home Cole to take a 1-0 lead, but it wasn’t until the third inning that they were able to pad that lead to a more comfortable size.

Senior Jake Arledge led off the third with a single and, eventually, reached third base after a wild pitch and a fielder’s choice off the bat of Luke Bonfield. Bonfield was able to get into scoring position in the next at-bat on another wild pitch, leaving the scoring opportunity wide open for Koch.

The Fayetteville, Arkansas native laced a 1-1 pitch into the right-centerfield gap for his first hit of the year, driving in two runs in the process and giving the Razorbacks the 3-1 lead. He later scored on a Carson Shaddy single to make it 4-1.

After Stephan made it through four innings on the mound, the bullpen shutout the Redhawks for the remaining five innings. Dominic Taccolini, Weston Rogers and Cody Scroggins struck out a combined six batters and only allowed one hit the rest of the way. Taccolini did allow the first walk of the weekend in the seventh inning, snapping a streak of 56 consecutive batters without allowing a walk by the Arkansas pitching staff.

Razorback Quotables
“I think it’s great experience for our new guys. I think once you get used to it you know they (fans) are there, but you are not in awe of it. You are just appreciative more than anything that they come out to watch us in all kinds of weather. Today’s crowd was incredible. I mean I don’t know if I have ever seen that many people in the outfield.” – Head coach Dave Van Horn on the size of the crowds through the first two games

“He helped me out a lot. He calmed me down in the bullpen because I didn’t know what I was walking out to. He just talked me down and told me I was going to go. He had faith in me.” – Trevor Stephan on how catcher Grant Koch helped him through his first start

“I think it’s incredible. I think they are really confident up there and that’s the biggest thing.” – Grant Koch on the strong starts by the pitching staff over the first two games

-Arkansas is 2-0 to start a season for the sixth straight year, 13th overall under head coach Dave Van Horn.

-Before allowing a run in the fourth inning Sunday, Razorback pitchers threw 12 straight shutout innings, the longest streak to start the year since not allowing a run over 13.1 innings at the start of the 2011 season.

-For the second straight day, Arkansas struck out more than 10 Redhawk batters, bringing the total to 23 for the weekend.

-Arkansas’ one run allowed is the fewest through the first two games of a season since 2006.

Up Next
The Razorbacks and Redhawks will play their final game of the three-game opening weekend series Sunday afternoon at Baum Stadium. First pitch is scheduled for 1:02 p.m. and will be televised on SEC Network+.