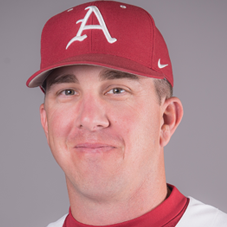 Clay Goodwin enters his 16th season as director of operations for the Arkansas baseball program in 2023.

As the director of operations, Goodwin coordinates many of the behind-the-scenes aspects of the Razorback baseball program as he works in conjunction with the Arkansas coaching staff.

Prior to his appointment as the director of baseball operations, Goodwin spent the 2006 season as the Razorbacks’ fifth-year student assistant coach. He assisted the Arkansas coaching staff with practices, day-to-day administrative duties and game day activities. He served as a graduate manager for Arkansas during the 2007 season.

Goodwin was an outstanding player for the Razorbacks over four seasons, and his name is littered throughout the Arkansas record book. An excellent defensive third baseman, he was also known to have an effective bat and finished his career with a .297 average, 49 doubles, 12 home runs and 127 RBI.

At the conclusion of his four-year playing career, he ranked eighth in career at-bats (750), tied for ninth in career hits (223) and tied for fifth in career singles (157). Goodwin appeared in 202 games as a Razorback, making 193 starts.

Goodwin graduated from Arkansas in May of 2005 with a degree in kinesiology. He completed his master’s degree in workforce development at Arkansas in the fall of 2006.

Goodwin and his wife, Jill, have a daughter, Caroline, and a son, Gage.