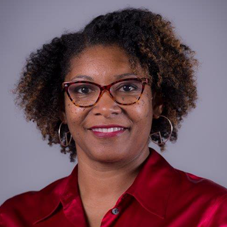 Derita Ratcliffe Dawkins added the title of Assistant Vice Chancellor in August 2021 in conjunction with a university-wide initiative recognizing her integral role as the Chief Diversity Officer for the Department of Athletics. She additionally serves as Deputy Athletics Director for Student-Athlete Wellness. Senior Woman Administrator (SWA), a role she has held since September of 2019.

She has more than 20 years of experience in intercollegiate athletics, including five years in a leadership role and the University of Arkansas and eight and a half years at the University of Alabama at Birmingham (UAB) as Senior Associate Athletics Director and Senior Woman Administrator (SWA).

With Razorback Athletics, Dawkins serves as the sport administrator for women’s basketball and the men’s and women’s cross country/track & field programs, She additionally provides supervision of the department’s student-athlete development program, including career services, the department’s sports performance services, including athletic training, strength and conditioning, psychological services and nutrition programs. She will be a member of Razorback Athletics’ executive and senior staffs as well as the department’s sports administrator group.

A native of Portsmouth, Va., Dawkins attended James Madison University earning a degree in Psychology with a minor in English. She then attended Virginia Polytechnic Institute and State University, earning a Master’s Degree in Clinical Psychology.

While at Virginia Tech, she began to work as a tutor for student-athletes. Dawkins’s career in intercollegiate athletics began at VT as the Assistant Director of Student Life in the summer of 1994. She became an Assistant Athletics Director at Virginia Tech in 1997 and was charged with overseeing a plan designed to curb some of the off-the-field incidents that were occurring with student-athletes.

Dawkins spent five years at Virginia Tech before joining Long’s administration for the initial time, when he was serving as the athletics director at Eastern Kentucky University. As the Assistant Athletic Director for Administration and Compliance/SWA, she was highly versatile in working with many administrative areas. She rose to the position of Associate Athletic Director/SWA in the summer of 2001.

On December 31, 2004, Dawkins became the first female and the youngest person in program history to be selected as Director of Athletics at Kentucky State University, a Division II HBCU located in Frankfort, Ky. she served at KSU for nearly four years overseeing operations for a program which featured 13 sports.

Throughout her professional career, Dawkins has served as a mentor and resource for women and ethnic minorities among student-athletes, coaches and administrators throughout the country. She has served on numerous committees both on campus, at the conference level and nationally, including a stint on the NCAA Championships/Sports Management Cabinet. She currently serves on the NCAA Playing Rules and Operating Panel. Dawkins is an active member of Delta Sigma Theta Sorority, Inc.