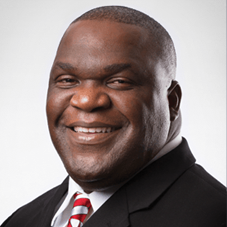 Marvin Caston joined the Razorback Foundation in 2009. The former Arkansas fullback began his professional career with the Razorbacks in 2005 in the compliance office as an Assistant Athletic Director for compliance. He also served as Chairman of the “A” Club membership drive, Co-Director of the Athletic Prevention Programming & Leadership Education Program and Assistant Athletic Director in the student life office.

Prior to his experience at Arkansas, Caston held a compliance position at the University of South Florida.

Caston played for the 1998 Razorbacks team that shared the SEC Western Division title, played Michigan in the Citrus Bowl and ended the year ranked No. 16 in the nation. He was a member of the 1999 SEC Academic Honor Roll and earned a bachelor’s of arts and a master’s in education from the University of Arkansas. Caston is a member of the National Association of Athletics Compliance Coordinators, the Black Coaches Association and works as an Adjunct Instructor for the School of Social Work.

A native of Winnsboro, LA, he and his wife Tommi have two sons, Thomas and William.