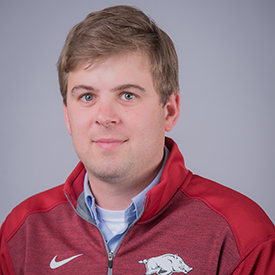 Matthew Downs is in his seventh season as the director of operations for the Arkansas men’s cross country and track and field program.

As the Razorbacks’ director of operations Downs is charged with complete oversight of the team’s administration responsible for coordination of travel, meet operations, student-athlete eligibility, team equipment and gear along with assisting with the promotion of the program.

During the 2021 indoor season, with restrictions still in place due to Covid-19 pandemic, Downs orchestrated 11 home meets from January to March, which included the SEC Indoor and NCAA Indoor Championships along with four professional meets.

Downs came to Fayetteville from Eugene, Oregon, where he was employed in a similar capacity with the Oregon Ducks for four years (2012-16).

With the Oregon program Downs was instrumental in the production and coordination of four NCAA Outdoor Championships at Hayward Field.

Prior to Oregon, Downs spent three years (2009-12) as the director of track and field operations at the University of Virginia. In addition to his role as home meet director for the Cavaliers, he also assisted with the program’s alumni relations and with the planning, fundraising, and development of Virginia’s $7 million track and field facility.

Downs also worked with the SunTrust National Marathon in Washington, D.C., as well as college football’s Military Bowl and the NCAA Frozen Four.

Downs, from Richmond, Va., was a three-time all-conference runner for the University of Mary Washington and team captain from 2006-08. He graduated from Mary Washington in 2008 with degrees in history and economics, and received his Masters in sport leadership from Virginia Commonwealth in 2009.

Prior to Virginia, Downs was an assistant track and field coach at St. Christopher’s High School in Richmond from 2008-09. Downs is also a USATF certified official with seven years of experience.