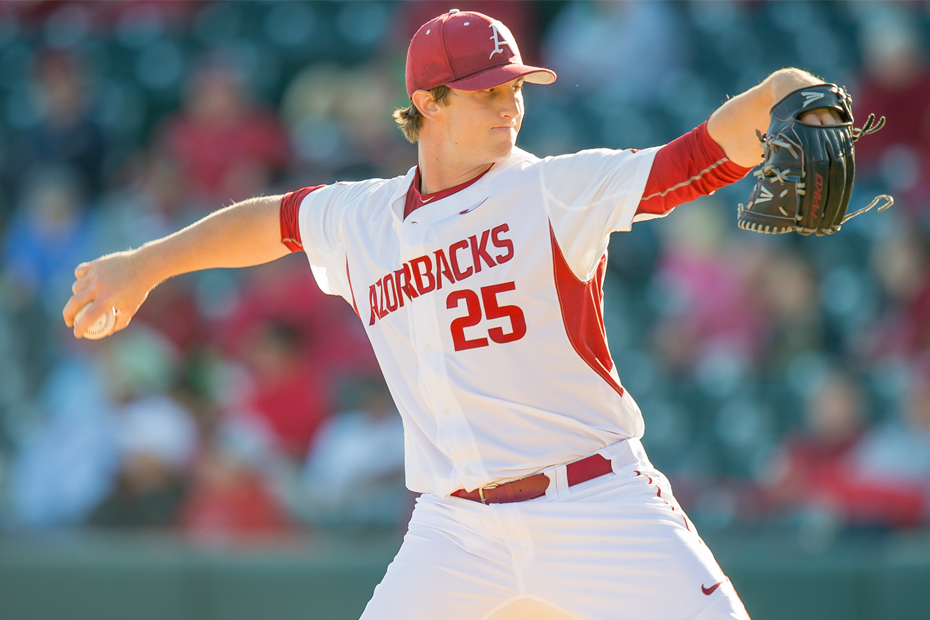 The win for Arkansas (9-1) is its ninth of the year and third-straight start for Taccolini where he has given up two runs or less. Friday night, he gave up just four hits and struck out five, while only allowing one walk, his third-straight start of only one walk given up.

Offensively, junior Jake Arledge and freshman Grant Koch led all Arkansas batters with two hits each. Koch smacked his first career home run in the third inning to get the scoring started for the Hogs, which was followed by a two-run shot from Carson Shaddy, his team-leading fifth long ball of the year. Shaddy finished the game 1-for-4 with two RBI, while Koch was 2-for-3 with the lone RBI off the home run.

“I thought Eastern Illinois played very well,” Arkansas head coach Dave Van Horn said. “Their starting pitcher didn’t make too many mistakes, and when he did we got a good swing on it with (Grant) Koch and (Carson) Shaddy’s swings. It was a well-played ball game with only one error between both teams. I thought our starting pitcher (Dominic Taccolini) did a good job on holding the lead there in the middle innings.”

Taccolini earned the win to move to 3-0 on the year. Eastern Illinois starting pitcher, Matt Wivinis, was saddled with the loss to move to 0-3.

It what was his shortest outing of the year so far, Taccolini’s toughest inning came in the fourth after his teammates had already spotted him a 3-0 lead. The Panthers (0-9) got a lead-off single, then a walk to put two aboard with no outs.

Taccolini battled back to strike out the next two batters and seemed to be on his way to escaping the inning with no runs across. Unfortunately, the elusive third out was hard to come by as Eastern Illinois knocked in two runs off singles in the next two at-bats to cut the lead to 3-2.

Arkansas scratched across another run in the fifth inning after two walks led off the fifth inning by Wivinis. Clark Eagan brought the run home from second on a single through the right side, giving the Razorbacks an important insurance run. Eagan finished the game 1-for-3 with the one RBI and a walk.

The run forced Eastern Illinois to pull its starter, Wivinis, and go to the bullpen to bring in Andy Fisher. Wivinis’ final line ended up being four innings pitched with five hits given up, four earned runs and three walks with three strikeouts.

The Razorbacks were not able to do anything after the pitching change as Fisher struck out two of the three batters he faced to leave two Hogs stranded on the basepaths.

Taccolini was relieved after the fifth inning starting with Jordan Rodriguez, who was the first of four Razorback pitchers out of the bullpen that saw action Friday afternoon. With none of the relief pitchers throwing more than 1.1 innings, the Arkansas bullpen silenced the Panther hitters for the remaining four innings, scattering four hits with four strikeouts, one walk and no runs allowed.

The upward trend of the bullpen goes all the way back to the start of the season. Through the first 10 games of 2016, the Razorback bullpen has a combined 1.37 ERA with only 38 hits allowed over 52 innings, eight earned runs, 19 walks and 63 strikeouts.

“We’ve tried to establish roles,” Van Horn said on the bullpen. “Give the new guys an idea on how we run our bullpen. When they come in, they come in pretty focused and, for the most part, do a tremendous job. I just think the right-right-left-left combination and mixing up and do some things we weren’t able to do last year, we’re able to do it with confidence.

Junior Zach Jackson has led the charge as the Hogs’ closer as he picked up his third save of the year against Eastern Illinois and has pitched seven innings, while allowing just three hits, one earned run and notching 11 strikeouts.

On Friday, Jackson came in to the ninth inning with one out and runner on third, looking to hold Arkansas’ 5-2 lead. Jackson shut the door, striking out the final two batters of the game to send the Hogs home with their ninth win. The three saves ties Jackson for second-most in the SEC this season.

The Razorbacks and Panthers return to the field for game two of the series on Saturday with first pitch slated for 12 p.m. Saturday’s game will not be on SEC Network+, but the radio will still be carried live on the Razorbacks Sports Network from IMG.